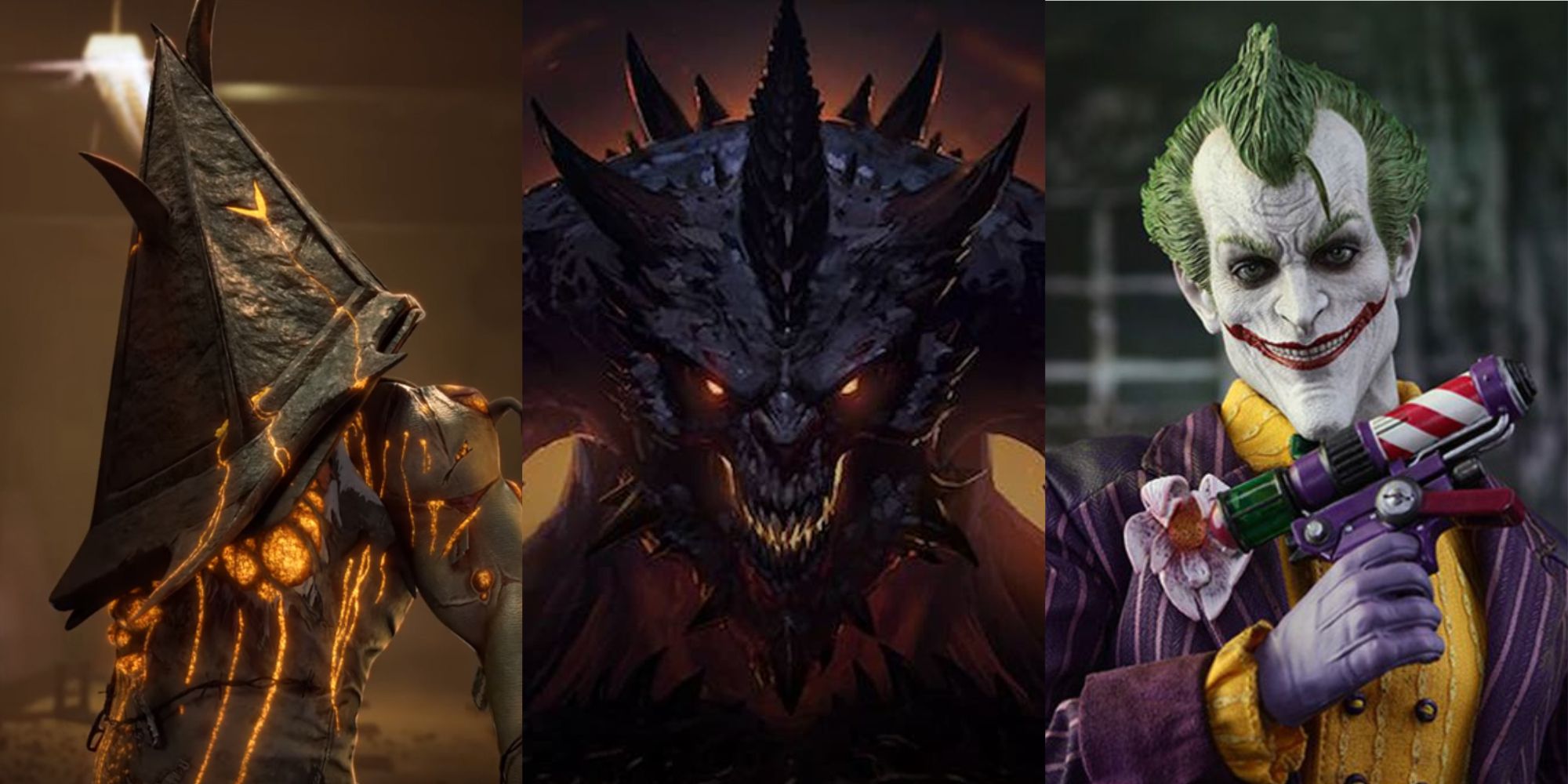 Even before Bowser’s iconic debut in 1985’s Super Mario Bros., great villains have played a huge role in the ever-growing success of the video game medium. Countless titles have centered around their protagonist’s struggles against the forces of evil, and as a result, their antagonists rank among the most memorable characters in gaming history.

Although cruelty doesn’t necessarily have to be a trait of every villain, it certainly goes a long way in establishing the danger they pose. Due to this, there are a handful of video game characters whose heinous actions have left an indelible mark on fans that won’t soon be forgotten.

As the Silent Hill series has slowly grown into a massive, multimedia franchise, one thing has remained the same: its close association with the iconic villain Pyramid Head. Introduced in Silent Hill 2, Pyramid Head is originally presented as a manifestation of the protagonist’s guilt, only to transform into a character more similar to horror characters like Jason Voorhees and Freddy Krueger in later franchise installments.

Most of what makes Pyramid Head so terrifying is its unsettling design and erratic movements, but its penchant for violence cannot be understated either. The monstrosity murders several people directly in front of the player, many of whom are close friends/allies with the playable character.

To be fair, the majority of the Mortal Kombat roster could be labeled as incredibly cruel thanks to their affinity for grotesque, over-the-top violence. However, even by their standards, the primary antagonist for several of the series’ installments Shao Kahn operates in a league of his own.

RELATED: The 10 Best Quests In The Elder Scrolls Series

As the ruler of the Outworld, Shao Kahn controls what is quite possibly the harshest and most unforgiving realm in the Mortal Kombat universe. As would be expected, Kahn took this position by force, and given his proclivity for brutal executions, he almost certainly loved the conflict that it entailed.

Before discovering the nature of his birth, Sephiroth was the pride of the Shinra Electric Power Company’s SOLDIER program. However, after learning that he was created during the group’s efforts to create the ultimate biological weapon, the super-soldier was driven mad, descending into a spiral that ultimately left him with a desire to destroy the world.

In particular, Sephiroth clearly expresses pleasure in tormenting Final Fantasy VII‘s main character, Cloud Strife. The villain’s brutal murder of Cloud’s ally, Aerith, is as surprising as any in video game history, and unfortunately, it joins a long line of atrocities committed by this silver-haired antagonist.

The Legend Of Zelda Series

Every great video game hero must have an equally enthralling antagonist, and nowhere is this more clear than Link’s struggle against the Prince of Darkness, Ganondorf. Ganondorf appears in most of The Legend Of Zelda games, plaguing the land of Hyrule with his quest for absolute domination.

As the incarnation of the Demon King Demise’s hatred for the world, this villain has thrown away countless lives in pursuit of the Triforce, many of whom were his own loyal followers. His ability to deceive and destroy makes him not only one of the most memorable characters in the Zelda series but in all gaming history as well.

The radioactive wastelands of Fallout haven’t been kind to any of its inhabitants. Malformed mutants, idealistic factions, and frighteningly evil humans are littered throughout each game in the franchise. With that being said, none compare to the horrors inflicted by Cook-Cook, the murderous chef wandering Fallout: New Vegas.

Cook-Cook is confirmed to have murdered several unfortunate travelers, but these crimes are just the beginning of the atrocities that he’s committed. The pyromaniac burned countless others to varying, sometimes fatal, degrees, but that is just the tip of the iceberg with this abhorrent wasteland wanderer.

5 The Joker And Batman Are Polar Opposites

As sure as light creates shadow, Batman’s actions are bound to be offset by the efforts of his archenemy, The Joker. These two are almost inseparable from one another, especially in the first two installments of the Batman: Arkham series.

Since the Joker lives to be the inverse of Bruce Wayne, he sews discord and strife throughout Gotham City with as much regularity as possible. His obsession with the Caped Crusader compels him to hurt Batman however he can, resulting in an incredibly cruel villain with an unending desire for retribution.

4 Dung Eater Wants To Defile Everything In The Lands Between

With a name like the Loathsome Dung Eater, Elden Ring‘s most morally reprehensible Tarnished was destined to become one of FromSoftware’s cruelest villains ever. After players find the Dung Eater locked away in the sewers under Leyndell, it quickly becomes clear that the character has been driven mad by his compulsion to inflict pain and suffering.

This serial killer is known for “defiling” his corpses, a term that thankfully remains undefined. Ultimately, he aspires to imbue the Elden Ring with his seedbed curse, thereby transforming the Lands Between into a realm full of accursed Omens.

3 Molag Bal’s Sphere Of Influence Is Enslavement And Domination

The Elder Scrolls franchise has thrown a lot of different enemies at its players, yet none have been as evil as the primary antagonist of The Elder Scrolls Online, Molag Bal. As one of the 17 Daedric Princes, Bal serves as the patron deity of enslavement, vampirism, and domination.

Daedric Princes are inseparable from the domains that they rule, so Molag Bal’s relationship to strife and suffering is an integral part of his very being. His repeated efforts to enslave the totality of The Elder Scrolls‘ mortal beings speak to his overwhelmingly malicious nature, cementing him as the franchise’s most vile opponent.

2 Diablo Rules The Burning Hells With An Iron Fist

It’s hard to be eviler than the king of Hell himself. Diablo, the titular antagonist of the Diablo series, governs the Burning Hells with his six other siblings, the Great Evils. However, Diablo is the dominant power of the seven, holding the title of “Ruler of Hell” over all other Demons.

Each of the Great Evils is unimaginably evil, yet out of all of them, Diablo clearly expresses the most pleasure when exacting suffering. Whereas many of his brethren revel in the destruction or conquest associated with their work, the Ruler of Hell enjoys the literal terror that he inspires. This wicked mindset, coupled with his position in the game’s Underworld, makes him the cream of the crop when it comes to video game villains.

Rockstar Games has a reputation for hyperbolizing its characters in order to capture the absurdity of American life. But Lionel Starkweather, the primary antagonist of Rockstar’s incredibly controversial title, Manhunt, easily takes the cake as their cruelest of all time. Starkweather derives a sick, perverse pleasure from the snuff films that he directs throughout the entirety of the game to such a degree that it often provides the few bits of comedy this title has to offer.

While the actions Starkweather makes the player commit are horrifyingly shocking, what’s even worse is his manipulation of the main character, James Earl Cash. He guarantees Cash freedom and the chance to save his family, only to pull the rug out on both offers with zero remorse. Lionel Starkweather demonstrates the depths of human depravity. Considering the number of snuff films he’s likely directed, he’s undoubtedly the biggest abomination in the Rockstar universe.