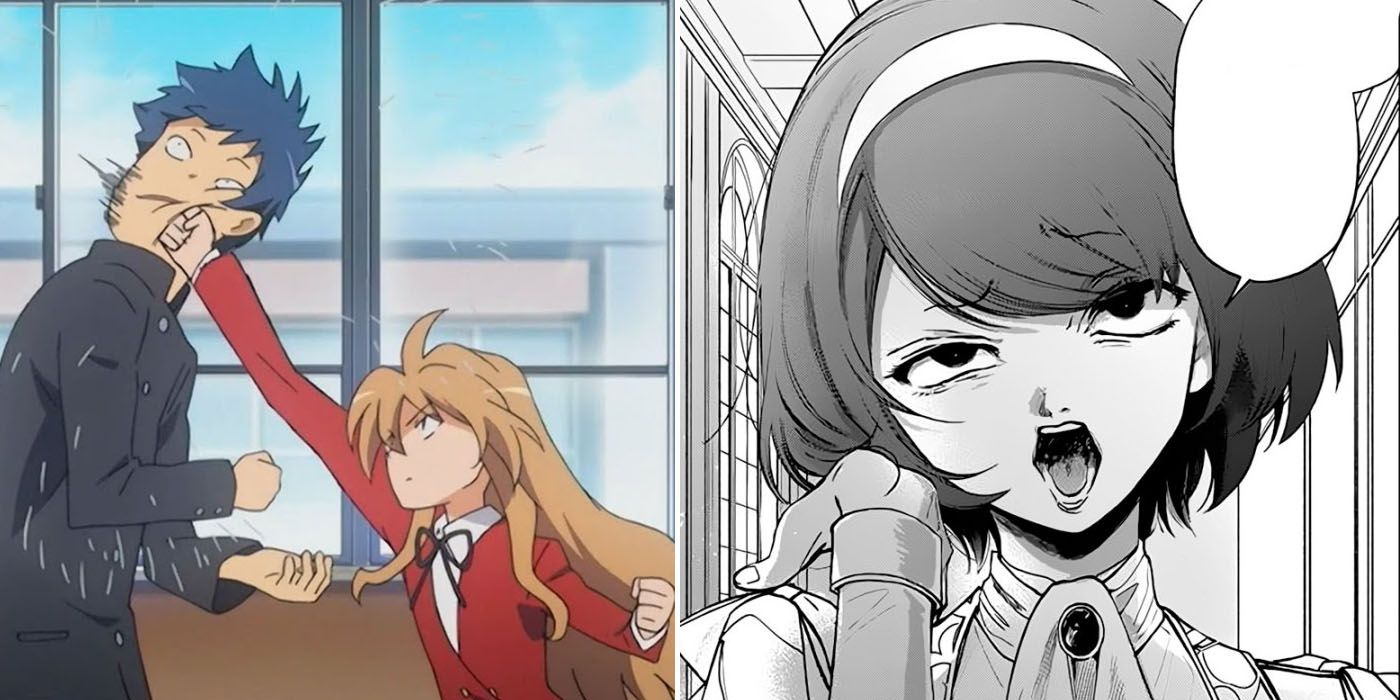 Shojo anime isn’t really a genre. It refers to the target demographic, which is young girls. Despite this, this type of anime can be enjoyed by all kinds of audiences, as many shojo anime can be funny and have fantastic writing. Shojo anime does have its list of tropes that appear over and over again, and not all of them hold up as well as they did years ago.

Some shojo tropes have become downright offensive and some give terrible lessons on romance that young girls shouldn’t take to heart. As a result, many of the things that happen in shojo anime should remain in fiction.

This trait appears even worse if it is a harem anime. The love interests will get hurt if they’re rejected, but it must hurt more to know that the lead can’t decide if they want to be with them.

9 Some Anime Fall Off After The Main Characters Start Dating

Shojo anime usually draw out the early stages of romance before the pair actually get together. This keeps audiences at the edge of their seat, and the payoff can be great once the duo finally get on the same page. Unfortunately, some stories have lost their spark after this. A story falls flat when it feels like the author is struggling to figure out what to do with the couple next.

A good example of this would be Kare Kano. It makes an honest attempt to find ways to make the characters connect and grow as a couple, tackling insecurities and other relatable hurdles. However, nothing beats the comedy of its first few episodes.

8 The Female Lead Is Really Dense

Authors usually have to find a way to build up a romance. They may utilize interrupted or unheard love confessions, but this is easier to pull off if the female lead is very dense. Many female leads are dense to the point where a character could confess their feelings directly to their face, only to be met with a “you love me as a friend, right?”

RELATED: The 10 Most Clichéd Characters From Shojo Anime, Ranked

7 A Character Distances Themselves From Another To Protect Them

An infuriating trope is when a character decides to distance themselves from the person they love in order to protect them. This is a decision that they reach on their own, and they give a half-hearted farewell or none at all. They don’t communicate their intentions or even allow their partner to talk them out of it.

Instead, they assume that they know best, when in reality they are hurting the person that they love most in a way that no other threat could. The two end up reuniting regardless, making this feel like a pointless detour in the story.

6 Arguing All The Time Isn’t Chemistry

When two characters start arguing all the time in shojo anime, this may be a solid indicator that they will end up together in the end. Sailor Moon is the most prominent example of this, as Usagi and Mamoru spend the beginning of the series butting heads and hurling insults.

When a couple will so clearly end up together, fans are left wondering why the series is pretending that they won’t. It isn’t fooling anyone, no matter how irritable Usagi gets after an exchange with Mamoru. Many other couples in anime do this, but it is still jarring when they later become lovey-dovey and inseparable.

5 Some Endings Feel Forced Or Rushed

If the lead has more than one love interest, fans are sometimes split in regard to who the lead should end up with. In Fruits Basket, some fans wanted Tohru to end up with Yuki, while others wanted to see her with Kyo. Towards the end, Yuki was ushered into a romance with someone else. He stated that he saw Tohru more like a mother, which most fans found really strange. This showed that giving the characters a happy ending should not be rushed.

In Fushigi Yuugi: A Mysterious Play, Miaka and Tamahome were supposed to be star-crossed lovers who couldn’t be together. At the end of the series, Tamahome appeared in front of her out of the blue, which was a forced happily ever after.

The aggressive tsundere has appeared less and less over the years, with this character type being particularly prevalent in the ’90s and early 2000s. It was strangely common for women to inflict pain on men through multiple violent means.

Kagome from Inuyasha, Naru Narusegawa from Love Hina, and Taiga Aisaka from Toradora! are all examples of women who have raised their hands against their love interests and still managed to win the men over in the end. In reality, any woman who delivers this kind of blow to anyone would get a restraining order.

3 Love At First Sight Is Too Superficial

Many people have grown tired of seeing characters falling in love at first sight in Western media. Even anime have had characters become immediately enamored with someone at the drop of a hat. In Shugo Chara, Amu quickly fell in love with the Prince of the school, Hadase Hotori.

Like many scenes like this, the love felt completely superficial. He even quickly fell for her, too, after seeing her Amulet Heart persona. This made fans actually root against this pair, feeling that they would never work out in the long run.

2 There Is A One-Dimensional Love Rival

Many love rivals, particularly the female ones, can be completely antagonistic. They do whatever they can to sabotage a relationship and the female lead’s image just so they can steal the male lead away. They often do not care if the leads are in a relationship or not, and are sometimes portrayed as downright evil.

Making a character so one-dimensional feels like an easy alternative to giving the love rival a relatable motivation or character arc. While it is satisfying to watch karma kick in, they are quickly forgotten after they are no longer needed as a plot device.

1 One Love Interest Is A Complete Jerk

Some love interests can be incredibly toxic or manipulative at the start, making fans wonder how in the world they could possibly be redeemed. Tsukasa Domyoji from Boys Over Flowers is a good example of this, as he was the leader of the F4.

If anyone offended the group, they would give them a red card. This red card was a silent signal to the other students to bully whoever was given one. He gave one to Tsukishi Makino for defying him and sent other people to attack her and even kidnaped her. He slowly became a better person, but it’s hard to forgive the things he did during his high school career.

NEXT: 10 Life Lessons We Learned From Shojo Anime