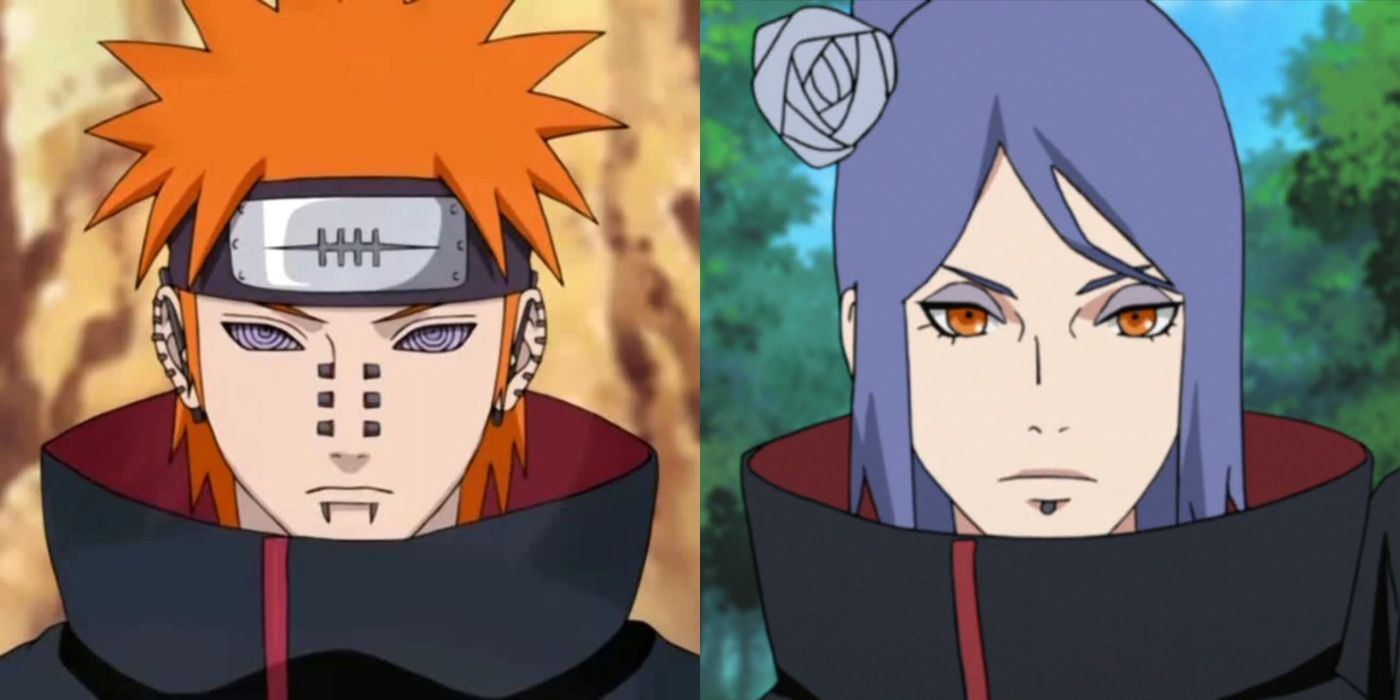 Naruto: Shippuden is one of the most popular anime series of all time, and with the release of the newest manga chapter of Boruto: Naruto Next Generations, fans remain enthusiastic and excited. A key reason for Naruto’s success is due to its amazing villains, most of whom are members of an organization called the Akatsuki.

The primary ambition of the Akatuski was to capture every tailed beast in the world and use the power of those beasts for political control. Some members of the organization truly sought peace while others had a more evil intent.

It’s easy to dislike Konan, as she’s one of Jiraiya’s students who turned against him, but she’s definitely not an evil character. She follows Nagato because she truly believes in his plan to ultimately achieve peace, even if his process involves doing bad things.

Konan isn’t afraid to resort to violence in pursuit of the Akatsuki’s goal. She killed multiple shinobi during the assault on the Hidden Leaf Village without hesitation. Her redeeming factor was that she turned against the Akatsuki when she realized Obito didn’t seek the same peace that Nagato did.

The child prodigy known as Itachi Uchiha is one of the most powerfully versatile shinobi in Naruto. He’s responsible for the slaughter of the entire Uchiha clan, a truly evil deed for the betterment of the world.

Itachi is not an evil character, but he’s also not above committing atrocities for the “greater good.” Itachi carried out one of the greatest betrayals in Naruto when he killed every member of his clan. However, he couldn’t bring himself to kill his little brother Sasuke, who he cares for throughout the entire series.

Every Naruto fan recognizes the phrase “art is an explosion.” This statement represents everything that Deidara stands for. He simply wants to express his explosive art and only joined the Akatsuki because he was forced to.

Deidara is not one of the evilest Akatsuki members, but that doesn’t mean he’s a good guy. His love of explosions suggests a certain liking for violence. During his fight with Gaara, he had no problem targeting civilians with his explosives.

The “tailless tailed beast” is regarded as a monster. Kisame is one of the strongest villains in Naruto, but not the evilest. His darkest attribute is that he’s quite sadistic in battle.

Kisame is one of the few honorable members of the Akatsuki. His reason for joining the organization was to support Obito’s plan to eventually create a world of truth. Kisame dislikes how the real world is full of lies and the Infinite Tsukuyomi would rid the world of them. This ambition doesn’t sound evil, so Kisame wouldn’t seem as villainous if he wasn’t so bloodthirsty when fighting.

Attaining immortality by stealing people’s hearts is an evil act. This is a fitting power given to Kakuzu, the Akatsuki’s greediest member.

Some members of the Akatsuki had deeply meaningful reasons for joining the organization, such as attaining world peace. Kakuzu only seeks a monetary reward as he said to his partner Hidan. His motives aren’t pure evil, but they’re dishonorable and wicked at times.

Turning living people into puppets is a vile act. Sasori abuses this technique but also incorporates poison into his weaponry, dooming his enemies to a slow and painful death.

Sasori doesn’t have one of the best backstories, but he definitely has one of the saddest. His malicious nature is the result of his traumatic childhood experiences. Both of his parents were killed in battle and puppetry served as a way for Sasori to ease some of his pain. His hobby eventually grew more malevolent, along with his outlook on other people’s lives.

The figurehead of the Akatsuki represents everything that Naruto could have become if he strayed from his path the same way Sasuke did. Nagato wasn’t always evil, but pain and suffering led him down that path.

Nagato showed a complete disregard for the lives of others when in pursuit of his own goals. He leveled the entire Hidden Leaf Village with his “Almighty Push,” and was on the verge of murdering Hinata to make Naruto suffer. Nagato did have a change in his moral stance after speaking with Naruto, which is one of the most memorable times that Naruto won a fight without actaully beating his opponent. However, this doesn’t excuse his previous wrongdoings.

Even though Nagato led the Akatsuki through his “Pain” husk, Obito was the mastermind in the shadows. He is the one responsible for the formation of the organization and the fighting that ensues on their behalf.

Related: 10 Best Fights In Naruto According To Ranker

Much like Nagato, Obito was a good person when he was young. It was through witnessing the murder of Rin, the love of his life, that he snapped. With a little influence from Madara Uchiha, Obito lost his morality to the point where he tried to destroy his entire village.

Every member of the Akatsuki is rational to a certain degree. The organization has an end goal that each member contributes to. Hidan is an exception because his goals are a byproduct of insanity. His own allies can’t trust him.

In addition to being evil, Hidan is chaotic. It seems his biggest desire is to murder others through his sacrificial ceremony to his god, Jashin. Hidan is completely unpredictable and his only saving grace is that he’s a character with one of the coolest Naruto costumes.

Unlike everyone else mentioned here, Black Zetsu isn’t human. He is an offspring of an alien being named Kaguya. His purpose was to resurrect his mother, so he manipulated Madara and the Akatsuki to follow his will.

Black Zetsu is pure evil as he embodies manipulation and treachery. Zetsu doesn’t care for any being except for his mother, and they both share the same goal of murdering the entire world through the Infinite Tsukuyomi.

Next: Every Member Of The Akatsuki Ranked Weakest To Strongest