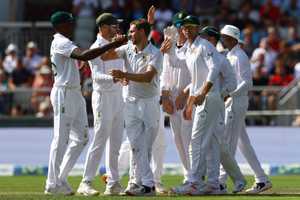 “Eighteen consecutive dot balls gets us a wicket”

Slowly and stealthily, but also steadily, a beautiful, black spider made its way, on a single silken thread, downward from the ceiling inside a stand at the Vauxhall End at the Oval on Sunday. Its focus seemed unshakeable, its apparent goal a nice dark spot on the carpet where it could lurk in wait of some hapless insect. It looked, like all spiders do, threatening. But also patient.

Maybe it had been put through its paces by Charl Langeveldt, who, in conversation with reporters at the other end of the ground a few minutes later, delivered what could be called a paean to persistence: “Eighteen consecutive dot balls gets us a wicket, but if you have two or three soft balls you let the pressure go. We want to bowl better from both ends. It’s no use one guy’s bowling well from one end and we’re leaking soft boundaries from the other. That’s how we release the pressure.

“When you play against teams who score quickly you want to restrict the runrate. If you get, more or less, 18 balls in a good area and ask good questions – by bowling dot balls – you’ll get a wicket. We’re a new group and we’ve worked hard on it, so if we can get 16 I’ll be happy. But 18 is the benchmark.”

England faced 1,136 deliveries in the first two Tests, which translates into just more than 63 opportunities for South Africa to have sent down 18 scoreless balls. They didn’t do so once. The closest they’ve come is the 15 scoreless balls Keshav Maharaj and Simon Harmer bowled to the Bens, Foakes and Stokes, during the second Test at Old Trafford last month.

That didn’t deter a pair who had been together for 174 deliveries by the time their dry spell started, and would bat on for another 134 balls before they were separated having shared 173 off 324 for the sixth wicket: the only century stand of the series as well as the longest partnership of the rubber. It was ended by Stokes’ dismissal for 103 when he skied Kagiso Rabada to cover. Foakes made an undefeated 113, and helped squeeze out another 95 runs with Nos. 9, 10 and 11 before Stokes declared.

What difference might another few consecutive dots have made? Who can say, but the partnership was key to England winning by an innings and 85 runs in three days to level the series. Had South Africa been able to apply enough of the right kind of pressure to snuff out the stand early, they might at the least have been carried into the decider at the Oval on Thursday on the cushion of the lead they took by winning the first Test at Lord’s by an innings and a dozen runs inside three days.

Instead, the momentum is with the home side and the pressure is on the visitors. Or is it? Eleven days will have passed between deliveries when the first ball is bowled at the Oval on Thursday. By then, the South Africans could have found ways to iron out the kinks in a batting line-up that was dismissed for 151 and 179 in Manchester and remembered how to bowl like they did to remove England for 165 and 149 at Lord’s.

Of course, the English could achieve the converse. But their chances of doing so would seem to have been dealt a severe blow by the removal from the equation of Jonny Bairstow, who suffered a serious leg injury while playing, of all things, golf. Bairstow’s slip as he approached a tee box at Pannal Golf Club, near Harrogate, on Friday will require surgical repair and could sideline him for a year. “Their middle order is their strength,” Langeveldt said. “I don’t want to speak about Bairstow but… I’m not going to say anything. I hope he recovers quickly.”

Bairstow is the top run-scorer in Test cricket this year, and went into the series having scored four centuries and 71 not out in his five previous innings. Bairstow has been replaced in the squad by Ben Duckett, who last played a first-class match in July, when he made seven and nought for Nottinghamshire against Sussex at Trent Bridge. But he has scored 1,012 runs at 72.28 in 14 innings in the county championship second division this season. Among his three centuries was an effort of 241 against Derbyshire in Derby, also in July.

South Africa also took to the golf course during the break. Unlike England they have returned unscathed, which is significant particularly because they will have to replace Rassie van der Dussen, who fractured a finger in the field at Old Trafford. He scored 134 in 37-degree Celsius heat to anchor South Africa’s 62-run win in the first ODI in Durham in July, but he has struggled to get going since in making 116 runs in seven international innings. Wiaan Mulder has been summoned into the squad, and Khaya Zondo or Ryan Rickleton could step into the breach.

“We took a few days off and the guys regrouped,” Langeveldt said during Sunday’s training session, South Africa’s first since Manchester. “Yesterday we came back, and it’s back to work. Mentally, we need to be fresh for the next game. They outplayed us in the last game. We didn’t speak much about the game, but the guys could get away from cricket. It’s been a long tour for both the coaches or the players.”

It started in the second week of July, and the South Africans have proved several times since that they have the bowling resources to hold their own against opponents who have built their game on overtly aggressive batting. When the visitors have come unstuck their batting has been the main problem.

Langeveldt was a fine fast bowler and is an excellent bowling coach. But he never batted higher than No. 9 in his 28 innings across the formats for South Africa, took guard at No. 11 16 times, and reached double figures only thrice. Did he think it odd that he should be wheeled out to explain South Africa’s batting failures?

“No; it’s nothing like that. I just think that whatever score we get gives our bowlers something to bowl at. I’m not a batting coach, but we’ve come a long way with our batting. Whenever we get the runs on the board, we’ve got the bowlers to put opponents under pressure.”

But he was on more solid ground talking about bowling and bowlers, including England’s: “They’re relentless. They give you nothing and ask good questions. Ollie Robinson’s got bounce, he’s got good control. With the new ball he asked a lot of questions. If you don’t have the right answers he will expose you. I can’t comment on Stuart Broad – the man’s taken a lot of wickets.” What of 40-year-old James Anderson? Might he keep bowling forever? “Definitely in England.”

In Langeveldt’s own dressing room, Lungi Ngidi has stuck out for, among other attributes, the intelligence and insight he has brought to the role of keeping it tight in a pace attack that bristles with Rabada, Anrich Nortje and Marco Jansen.

“Lungi’s impressed me,” Langeveldt said. “He went to the IPL, and I told him to work on his fitness and on getting his action repeatable over and over – try to get the release point right. Some days we need him to attack, but his control gives us another option. If you’re not getting wickets you’re keeping the runrate down. His pace has been up and he’s really bowled well for us.”

Ngidi came back from the IPL with a slower ball that has flummoxed most of those who have faced him. Was that Langeveldt’s doing? “He spent a lot of time with Dwayne Bravo and he’s really worked on that slower ball. We’ve been working on his wide yorker, his straight yorker and his slower ball bouncer. But he’s come a long way with his slower ball. People really struggle to pick it up.”

Ngidi was in Delhi Capitals squad in this year’s IPL but did not feature in a single match. Bravo played 10 games for Chennai Super Kings. Even so, the silken thread that connects all threatening but patient fast bowlers held strong.