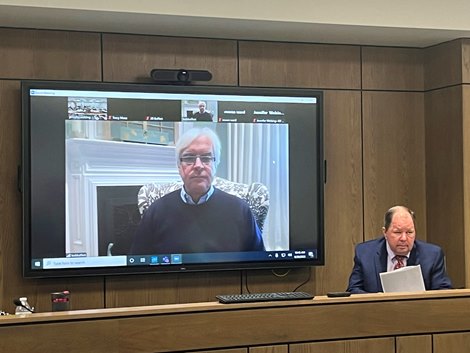 Clay Patrick, the attorney appointed to act as the hearing officer by the Kentucky Horse Racing Commission in the appeal of Medina Spirit ‘s disqualification from the 2021 Kentucky Derby Presented by Woodford Reserve (G1), has recused himself from the case over a possible conflict of interest.

The action comes after Baffert attorney Clark Brewster said he unknowingly purchased a More Than Ready   colt co-bred by Patrick that sold at auction last week at the Keeneland September Yearling Sale. The colt, Hip 409, was among a group of five horses that Brewster said he bought at the sale, either solely or in partnership.

Brewster said he was unaware that Patrick was involved with the sale of the colt, whose catalog page, like most horses in auctions, made no reference to the horse’s breeder or owner. Taylor Made Sales Agency was noted at the top of his catalog page as his consignor, acting as agent.

Brewster bought the horse, bred by Ramspring Farm, Milam Farm, and Patrick, for $190,000, acquiring him after the lawyer said consignor Susan Montanye and Hall of Fame trainer Steve Asmussen had short-listed the colt as a prospect for him. Brewster indicated they were also unfamiliar with Patrick’s connection to the horse.

Patrick oversees the daily operations and sales for Ramspring Farm near Frankfort, Ky., according to the farm website.

Brewster said it was only with further research after acquiring the colt, diving further into an examination of his pedigree and siblings, that he ultimately discovered Patrick’s affiliation with Hip 409.

He said he did not use a supplement sales resource, such as Auction Edge, which lists the breeders and prior transactions involving sales horses within its hip-by-hip statistics.

“Believe me, when I buy horses, and you can talk to anyone at Keeneland or (Fasig-Tipton)—nobody is checking who the owner is,” Brewster said. “That’s not a relevant fact on making a decision on a yearling.”

He said the chief considerations to a buyer are the prospect’s athleticism, pedigree, and veterinary records—not its ownership.

Notified Sept. 15 by Brewster of the lawyer’s purchase, Patrick hosted a pair of hearings Sept. 16 and Sept. 20 with Brewster and other lawyers involved in the case, Brewster said. According to Brewster, Patrick initially expressed a feeling at the first hearing that he did not see an issue with remaining as hearing officer, but at the second hearing, the KHRC indicated it would file a motion for Patrick to step down.

The circumstances involving the purchase of Hip 409 from the September Yearling Sale bring to light some of the potential issues with participants in the racing industry being involved in the legal case and the limited transparency of ownership shown in sales catalogs. Zedan Racing Stables and Medina Spirit’s trainer, Bob Baffert, who is appealing a suspension and fine as part of the appeal, are also regular buyers at equine auctions.

Brewster said he has been in the sport for more than 30 years as an owner and breeder, in addition to practicing law. The Oklahoma-based attorney often represents trainers appealing medication violations.

“I don’t think it creates a conflict for me to be involved in the industry as an owner, breeder, and an advocate for other owners, breeders, and even trainers, for that matter,” Brewster said. “That gives me a pretty unique, well-rounded perspective. That’s my view.”

He further stated that he felt a hearing officer could remain impartial under these circumstances.

Kristin Voskuhl, a spokesperson for the KHRC, confirmed Sept. 21 that Patrick had recused himself. The next steps in the case will be determined by the new hearing officer, once assigned, she wrote in an email.

Patrick gave no indication at the end of the hearing whether he seemed more likely to support the KHRC or the Medina Spirit camp in the case. He said in court that he had been given 60 days from the time of receiving a hearing transcript to issue a recommendation.

That recommendation, issued by the next hearing officer, will then go before the KHRC, whose commissioners are not obligated to accept it. Some KHRC commissioners have business relationships with Medina Spirit’s connections. A number of commissioners consequently abstained from a vote involving a stay request by Baffert that came before the commission earlier this year.

Appeals of the KHRC decision, if necessary, would proceed next into the court system.