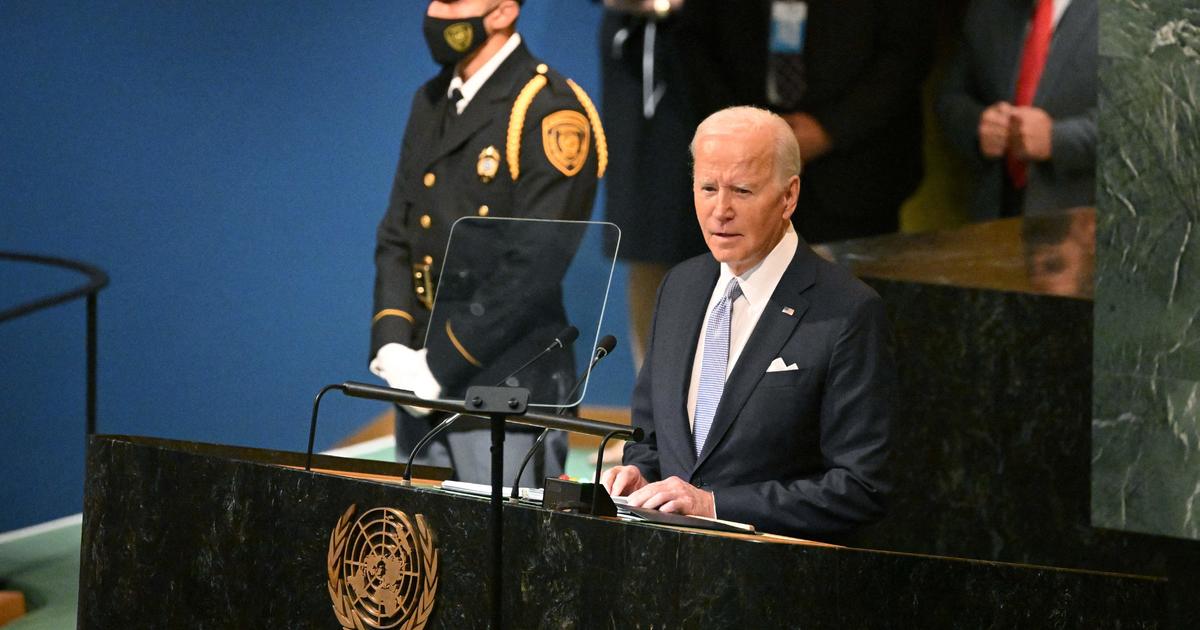 President Biden denounced Russian President Vladimir Putin over the war in Ukraine at the United Nations General Assembly in New York on Wednesday, telling world leaders that the very basis of the organization’s charter is under assault.

“As we meet today, the U.N. charter’s very basis of a stable and just, rule-based order is under attack by those who wish to tear it down or distort it for their own political advantage,” Mr. Biden said in his second address to the assembly as president. “And the United Nations’ charter was not only signed by democracies of the world. It was negotiated among citizens, dozens of nations, with vastly different histories and ideologies, united in their commitment to work for peace.”

Addressing the war in Ukraine, now in its seventh month, the president said Putin “claims he had to act because Russia was threatened, but no one threatened Russia, and no one other than Russia sought conflict.”

“Let us speak plainly: A permanent member of the U.N. Security Council invaded its neighbor, attempted to erase a sovereign state from the map,” Mr. Biden said. “Russia has shamelessly violated the core tenants of the United Nations charter, no more important than the clear prohibition against countries taking the territory of their neighbor by force.”

The president also announced a new U.S. investment of $2.9 billion to address global food insecurity stemming from Russia’s aggression, the COVID-19 pandemic and climate change. The money comes on top of the $6.9 billion the U.S. has already pledged to address food insecurity so far this year. Mr. Biden emphasized that, contrary to Russian misinformation, U.S. sanctions explicitly allow Russia to export food and fertilizer with “no limitation.”

“It is Russia’s war that is worsening food insecurity. And only Russia can end it,” Mr. Biden said.

On Monday, Ukraine accused Putin’s regime yet again of “nuclear terrorism” after a Russian missile struck close to a nuclear power plant in the country’s south. Ukrainian President Volodymyr Zelenskyy is scheduled to address the General Assembly by video on Wednesday. Putin is not attending the gathering.

On Wednesday, Putin ordered the partial mobilization of hundreds of thousands of additional Russian troops, and hinted at the possible use of nuclear weapons, a potentially catastrophic escalation.

“To those who allow themselves such statements regarding Russia, I want to remind you that our country also has various means of destruction … And when the territorial integrity of our country is threatened, to protect Russia and our people, we will certainly use all the means at our disposal,” Putin said in an address to the nation. “It’s not a bluff.”

At the U.N., Mr. Biden accused Putin of “making irresponsible threats to use nuclear weapons” and said “a nuclear war cannot be won, and must never be fought.”

Russia is also moving ahead with plans to annex large portions of disputed Ukrainian territory through the use of referendums that the U.S. and Ukraine quickly dismissed as illegitimate.

In an interview with CBS News on Tuesday, U.S. Ambassador to the U.N. Linda Thomas-Greenfield said the U.S. is “going to continue to do what we have been doing over the course of the past six months. We are going to condemn Russia. We’re going to isolate Russia. It will not be business as usual for the Russians here in New York for the 77th UNGA.”

The president also emphasized the United States’ efforts to combat climate change, while lamenting deadly flooding in Pakistan and starvation-inducing drought in the Horn of Africa.

“Families are facing impossible choices, choosing which child to feed, and wondering whether they’re survive,” Mr. Biden said. “This is the human cost of climate change. And it’s growing, not lessening.”

The U.S. will always promote human rights, and will always defend the U.N. charter, Mr. Biden said, urging other nations to do the same.

“This institution, guided by the U.N. charter and the Universal Declaration of Human Rights, is at its core, an act of dauntless hope,” he said. “Let me say that again — it’s an act of dauntless hope. Think about the vision of those first delegates who undertook an impossible task while the world was still smoldering. Think about how divided the people of the world must have felt with the fresh grief of millions dead, the genocidal horrors of the Holocaust exposed. They had every right to believe only the worst of humanity. Instead, they reached for what was best in all of us, and they strove to build something better.”

The president’s speech came a day later than originally planned, due to his traveling to the United Kingdom for the funeral of Queen Elizabeth II. At the U.N., Mr. Biden will hold bilateral meetings with leaders of allied nations, including his first meeting with the newly installed U.K. Prime Minister Liz Truss.

Mr. Biden’s address to the General Assembly last year, his first as president, came as the U.S. was completing its withdrawal of troops from Afghanistan. Then, the president said the global community stood at an “inflection point in history” amid the compounding crises of the COVID-19 pandemic, climate change and other challenges.