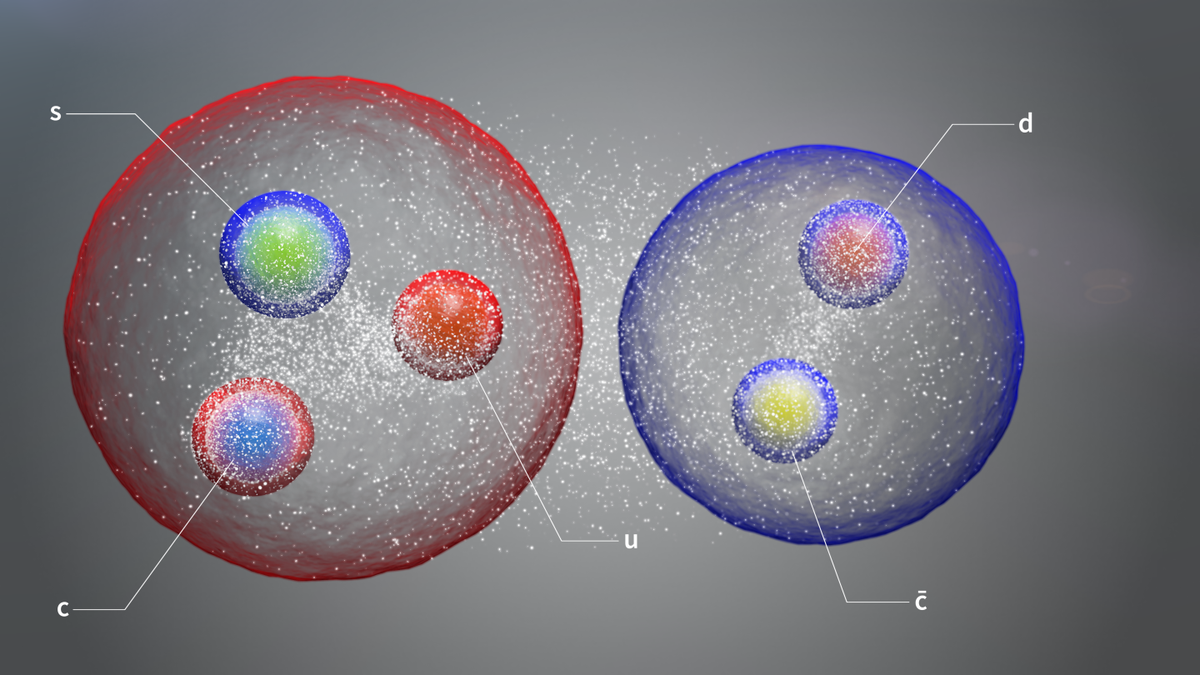 Physicists observing data from the Large Hadron Collider beauty (LHCb) collaboration in Geneva have found three never-before-seen “exotic” particles, adding to a growing list of sub-atomic particles that scientists know to make up the universe.

The newly discovered particles – described at a seminar on Tuesday – include a previously unseen pentaquark and the first-ever pair of tetraquarks that includes a whole new type of tetraquark.

Situated underground on the Franco-Swiss border near Geneva, the LHCb collaboration is one of the four large experiments at the Large Hadron Collider at Cern that specialises in studying the slight differences between matter and antimatter by studying quarks.

Quarks are elementary particles and generally come in six flavors – up, down, charm, strange, top, and bottom – and have various intrinsic properties such as electric charge, mass, and spin.

They usually combine together in groups of twos and threes to form hadrons – the most stable of which are protons and neutrons that make up the nuclei of atoms – scientists from the European Organisation for Nuclear Research, known as Cern, explain.

While such exotic particles have been theorised in the past, about 60 years ago, researchers say these have been observed by the LHC collaboration and other experiments only relatively recently in the last 20 years.

Most such previous discoveries of exotic hadrons in the last two decades have been of tetraquarks or pentaquarks, scientists say.

The quark combinations in these previously found tetraquarks and pentaquarks mostly included a charm quark and a charm antiquark, with the remaining two or three being an up, down or strange quark or their antiquarks.

For every quark flavour, there are also antiquarks, which are antiparticles of quarks that differ from the quark only in some of its properties, such as the electric charge, having equal magnitude but the opposite sign.

“The more analyses we perform, the more kinds of exotic hadrons we find. We’re witnessing a period of discovery similar to the 1950s, when a ‘particle zoo’ of hadrons started being discovered and ultimately led to the quark model of conventional hadrons in the 1960s. We’re creating ‘particle zoo 2.0,” LHCb physics coordinator Niels Tuning said in a statement.

Last year, researchers also found the first-ever instance of a “double open-charm” tetraquark with two charm quarks and an up and a down antiquark.

“Open charm means that the particle contains a charm quark without an equivalent antiquark,” scientists explained.

In the latest findings, scientists have described new kinds of exotic hadrons.

Another is a doubly electrically charged tetraquark, which is an open-charm tetraquark composed of a charm quark, a strange antiquark, and an up quark and a down antiquark.

Scientists spotted this particle together with its neutral counterpart.

“Finding new kinds of tetraquarks and pentaquarks and measuring their properties will help theorists develop a unified model of exotic hadrons, the exact nature of which is largely unknown. It will also help to better understand conventional hadrons,” LHCb spokesperson Chris Parkes said.