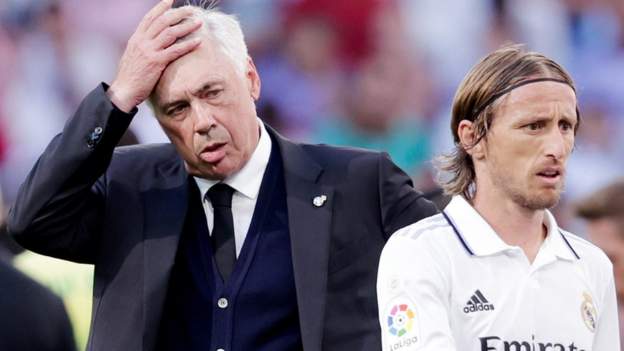 Ange Postecoglou’s side are fourth seeds behind the Spaniards, RB Leipzig and Shakhtar Donetsk in Group F.

But Celtic prepared for Tuesday’s game with a comprehensive 4-0 defeat of main domestic rivals Rangers on Saturday.

“There’s no reason why on Tuesday they can’t get off to a positive start,” Miller told BBC Scotland’s Sportsound.

“I think, at Celtic Park, with the way Celtic are playing, high on confidence, they can definitely trouble them when they’ve got the ball if they make the most of it and do what they do and train every single day to do.”

Celtic have won all seven of their Scottish Premiership and League Cup games this season, scoring 29 goals and only conceding two, and Miller expects Postecoglou to adopt the same attacking tactics despite the visit by the 14-time European champions.

“Ange has been pretty clear on that,” he said. “We saw it in the Europa League games last season – they will go toe-to-toe with teams and the games are exciting with lots of goals.”

Miller realises that, given they are facing “one of the world’s best teams”, the Australian’s side will also have to work hard without the ball and defend well.

“He seems to have that buy-in from the players where you have a real creative attacking player like Jota who will still put a shift in, Abada who works tirelessly on his side of the field and they’ve got guys like Giakoumakis, Kyogo and Maeda in that front line as well who work super hard,” he said.

Carlo Ancelotti’s Madrid have won all five of their domestic games this season and top La Liga by three points after beating nearest challengers Real Betis 2-1 on Saturday, but Miller points out that they “notoriously start slow” in the Champions League and lost at home to Moldova’s Sheriff Tiraspol last season.

Celtic have gone 10 games unbeaten at home, with only Rangers managing a draw, since losing to Bodo-Glimt in the Europa Conference League knockout stage in February and fellow former Celtic forward Simon Donnelly also believes Postecoglou’s side can “give a good account of themselves”.

“Celtic going into it on the high of a 4-0 win against Rangers, the place is going to be jumping on Tuesday night,” he added. “With their attacking prowess, they can hurt Real Madrid. The test will be can they keep the likes of Karim Benzema, Vinicius Jr and Luka Modric at bay?”