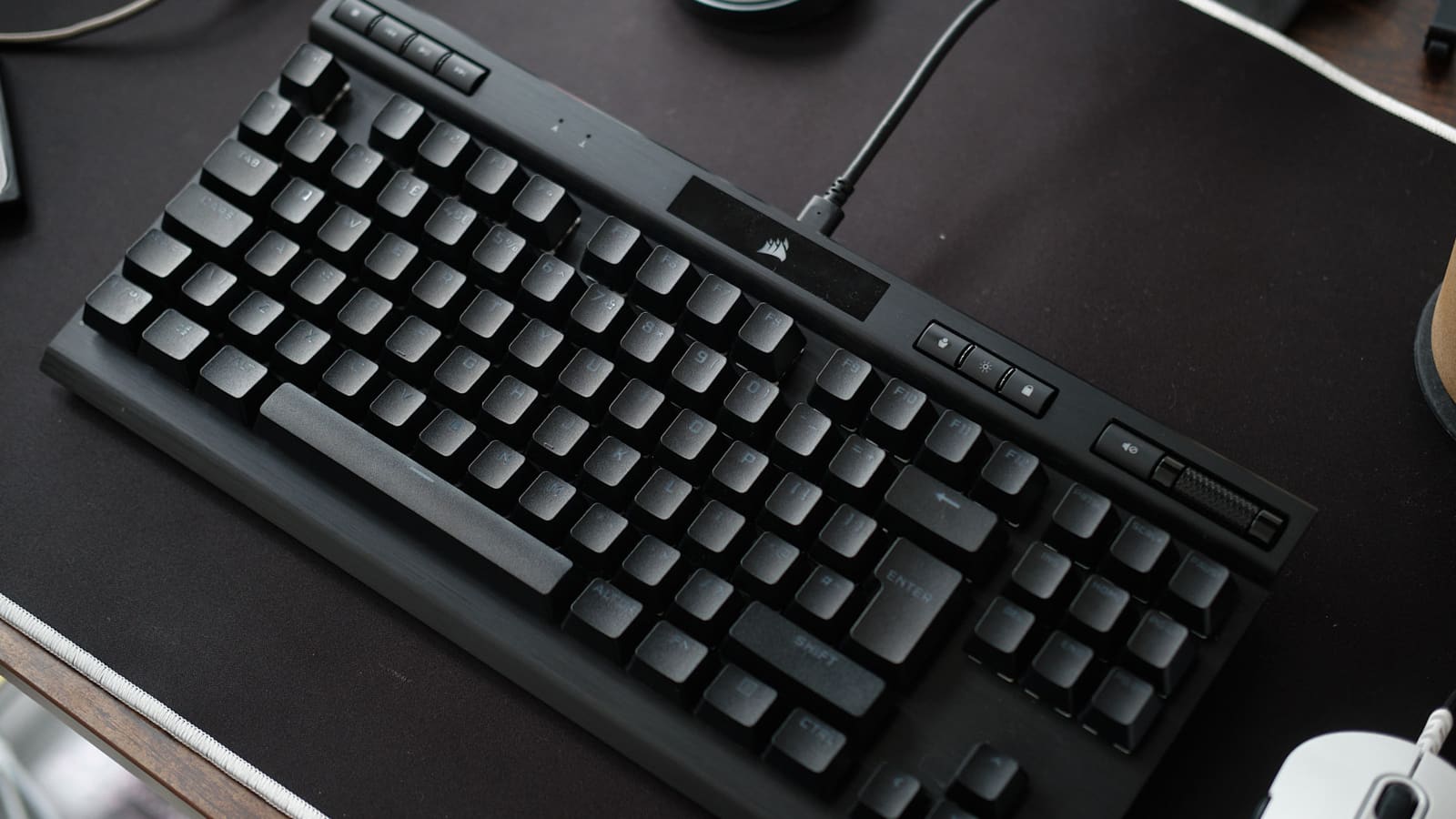 The new Corsair K70 RGB TKL Champion Series Optical-Mechanical gaming keyboard is another entry in the company’s long line of keyboards, but does it do enough to make it stand out from the crowd?

Corsair keyboards have long been a tried and true option for both entry-level and seasoned veterans of gaming keyboards. The Corsair K70 RGB TKL Champion Series Optical-Mechanical gaming keyboard is focused on one thing, and one thing alone, gaming. This is accentuated by Corsair’s choice of switches for the board itself, which are entirely focused on the gaming experience, with this flavor of the keyboard using optical-mechanical switches.

Seen one Corsair keyboard, you’ve seen them all

Corsair clearly has its own design language when it comes to keyboards, the brushed metal look and all-black aesthetics look great – when the lights are off.  The RGB has never really been that stunning, with the obvious commitment needed by the user to invest in their iCUE ecosystem. Compared to the likes of some of the best gaming keyboards, the RGB could stand to be just a little bit brighter.

We really appreciate the strong removable USB-C cable. Being able to immediately integrate it into our tangle of wires is a massive help when setting the device up. If you’re planning on upgrading or shifting to the Corsair K70 for whatever reason, you’re not going to be digging around the back of your PC.

Corsair has perfected build quality. There’s not really much we can say other than that the keycaps and build quality are all fantastic, you’re not going to have any flex at all when using the keyboard, so you won’t be able to break this one without intentional force, or a whirlwind of gamer rage after you lose that one match in Valorant.

While it might be a bit of a boring design, offering a cut-down version of the K100, you know what you’re in for if you’ve used a Corsair-branded keyboard before. Efficiency over everything at this point, with little deviations. That’s how you end up with top-tier build quality.

The packaging and actual setup are fairly simple. A braided USB-C cable with enough length to wrap around our L-shaped desk without much issue and the keyboard, nestled away inside.

You plug it in and on Windows, it was pretty much a straight-up plug-and-play scenario. macOS was the same. Every time we get around to using a Corsair keyboard, we’re thankful for the tactile buttons and the snazzy knob for media controls.

We do miss the programmable keys from the larger versions, but after a couple of days of use with the Corsair K70 RGB TKL Champion Series Optical-Mechanical gaming keyboard, you begin to forget about them. Though, it would have been nice to have a few along the side to make use of, even on a compressed board.

There’s the iCUE software that can configure your onboard profiles, memory, and RGB, and it all works without a single hitch. iCue may be its own walled garden, but it’s one that works incredibly well, especially if you have any other Corsair hardware in tow.

Let’s get this out of the way, the OPX switches in the Corsair K70 RGB TKL Champion Series Optical-Mechanical gaming keyboard are linear, and actuate incredibly easily. It is not designed for someone who just spent the last week writing a colossal 5000-word essay. Since the actuation force on the keys is so light, they don’t feel great to type on, or in general use.

It feels like playing an ice level in a video game, where your fingers just keep slipping all over the place. Not once in the full week of using it did we ever feel comfortable typing on it.

Essentially, with many mechanical keyboards, you have a two-step process. You won’t notice it in use, but as you press down, there’s always a point where the key won’t actuate.

With the Corsair K70 RGB TKL Champion Series Optical-Mechanical gaming keyboard, the optical input means that as soon as you hit the key, it’s going to acuate. This means that you might find yourself hitting the backspace button a lot more than you would otherwise since they are incredibly sensitive. Though, typing really isn’t this keyboard’s main focus.

The board feels like pressing through the same stick of butter after it’s been put into the microwave for thirty seconds. It just doesn’t feel right.  But, the same can’t be said of the board’s gaming performance, which it was made for.

Is it good for gaming?

While the typing experience of the Corsair K70 RGB TKL Champion Series Optical-Mechanical gaming keyboard isn’t the bestgaming on this thing is a joy. The smooth, linear actuation and lack of resistance make it ideal for pretty much all PC games. The optical technology of the board shines.

Playing games felt like a breeze. This keyboard rules when it comes to gaming. What we played, played exactly how you’d expect it to play. However, my fingers felt comfortable and the keyboard always managed to deliver when it came to movement.

The board could easily be used for fine movement in FPS titles like Counter-Strike or Call of Duty, just because of how well the switches work.

The most intense photo ever taken of someone playing Half-Life 2.

We tested the board in older shooters like Half-Life 2. These are games that require your reflexes to be on point, as at a moment’s notice, you’re dead. Being ardent fans of Half-Life 2, we can say that never has a keyboard felt so good playing it. In the esports circuit, while the board didn’t make us great at League of Legends, being able to quickly react at a moment’s notice.

In Destiny 2, a game that already feels great regardless of what you use, we actually came away with a couple of wins in the Crucible PVP modes, so it’s a notch of success for the Corsair K70 RGB TKL Champion Series Optical-Mechanical gaming keyboard. It’s no surprise that this is so good since its bigger brother, the K100  is near the top of our list of the best gaming keyboards.

When typing while playing, not having a heavier actuation holding you back means that communication is quick and easy. Sure, it sometimes looked like we were slapping my hands across the keyboard, but being able to rapidly tap out a few words back between applications and immediately ALT-Tab back into my game was glorious. No effort is required.

This is not a typing keyboard. It’s a gaming keyboard. Corsair K70 RGB TKL Champion Series Optical-Mechanical gaming keyboard was never intended to have essays, reviews, or anything written on it that wasn’t a quick-fire message to harass your teammates in whatever game you’ve decided to invest into. But the gaming experience is nearly unparalleled, the OPX switches work brilliantly for gaming, and we found ourselves liking it more with every keystroke.

At $150, this gaming keyboard is excellent for playing the latest games and getting incredible responsiveness and accuracy. However, if its sole use is typing, this board won’t be for you.