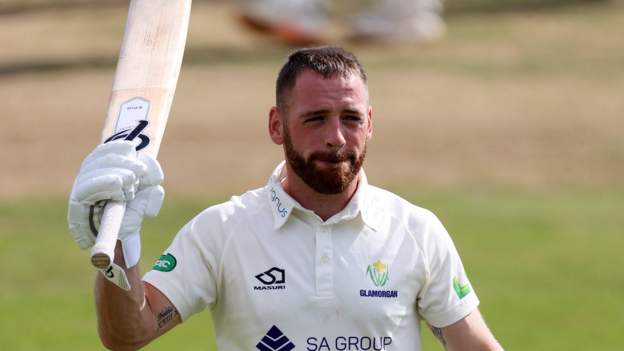 Glamorgan captain David Lloyd hit the second highest score in the club’s history as they kept up their outside hopes of promotion.

Lloyd’s 313 not out led Glamorgan to 550 for five declared, with Derbyshire struggling to 135-5 in reply.

His tally was only behind Sam Northeast’s unbeaten 410 at Leicester in July.

He overtook the 309 not out by Steve James and Mike Powell’s 299, previously the top score for a Welsh-born player.

Lloyd, 203 not out overnight, lost two early partners as Billy Root was lbw to Sam Conners for 79 and Chris Cooke made just seven before being caught at mid-wicket off the persevering Anuj Dal (2-67), who did most to retain control for a depleted Derbyshire attack minus the injured Ben Aitchison.

Moving through the 230s, Lloyd passed Hugh Morris’s top score on the ground and Aneurin Donald’s record score for Glamorgan against Derbyshire, as he played plenty of forceful shots square of the wicket.

He was dropped off Alex Thomson on 258 but kept piling on the pressure in a remorseless partnership of 151 with Andrew Salter (45 not out).

Lloyd smashed Thomson over mid-wicket for six to reach his triple century, finishing with 40 fours and four sixes before declaring 40 minutes after lunch- his score equalling the ground record set by Somerset’s South African star Jimmy Cook in 1990.

Derbyshire made a miserable start with Michael Hogan having Billy Godleman caught at slip for nought before spinner Ajaz Patel entered the fray, finding some turn to dismiss Brooke Guest (11) and Wayne Madsen, first ball.

Leus du Plooy was caught behind off Timm van der Gugten for a single as Luis Reece fought a lone hand at the other end, smashing a quickfire 50 to take the visitors to 67-4 at tea.

Salter had him caught behind just after the interval for 56, including 11 fours, but Harry Came (21 not out) and Dal (40 not out) shut up shop effectively in a stand of 60 to muster some belated resistance as the evening shadows lengthened.

“It feels a bit surreal, I’m very fortunate it’s happened and very pleased with how it’s gone so far.

“I’ve had chats with Matt (Maynard, coach) about making sure that when I do get to a hundred, i go big, my main focus was to get back in, start again and get as many runs as I could possibly get.

“I thought I went through the gears quite well and it’s nice to repay the faith. I didn’t sleep very well with the adrenalin going, it’s been a long couple of days but I wouldn’t change it for anything, it gave me a lot of confidence after a tough season.

“Sam (Northeast) had an incredible knock, Steve James had 309 and I’ve had a nice message off him.

“We bowled very well, there’s a bit of turn in the wicket. It’s going to be tough going but we’ve got enough time in the game hopefully to bowl them out.”

“It’s been a tough couple of days, winning the toss and probably misreading the wicket, then for Lloydy to play the way he did, you’ve got to take your hat off and say ‘well played’.

“We’ve got to make sure we show fight for the remaining six sessions of the game and try to come out with a result.

“The wicket’s lost a bit of pace, it’s going to deteriorate the way they’ve set up with two spinners, but we’ve got to come out with proper game plans and try to nullify the spinners.”