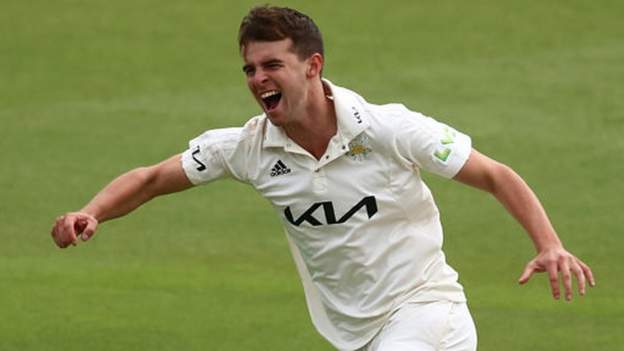 Surrey took a step closer to winning their second County Championship title in five years after forcing Yorkshire to follow on at the Oval.

The hosts’ relentless seam attack bowled Yorkshire out for 179 and when they batted again, 154 behind, they quickly lost Fin Bean in the fourth over.

Adam Lyth and George Hill got their heads down to take the score to 78 before Jamie Overton entered the attack and found some extra bounce to find Hill’s edge with his fifth ball.

When bad light stopped play Yorkshire were 89-2, 65 behind, with Lyth unbeaten on 36.

There is still work for Surrey to do, but they are in a strong position with two days to go.

After picking up six bonus points they now hold an 11-point advantage at the top and, if they wrap up victory, Hampshire would need to beat Kent to take the title race to the last round of matches next week, when Surrey visit Lancashire and Hampshire are away to Warwickshire.

On a fast-moving day in which 16 wickets fell, Surrey’s last four went down for 40 as they were dismissed for 333.

Jordan Clark, on 55, played on to Ben Mike in the first over of the day and Surrey were in danger of not collecting a third bonus point when Hill pinned Overton with an in-swinger and bowled Kemar Roach through the gate.

But Worrall thrashed 23 including two sixes as Surrey set a new club record by passing 300 in the first innings for the 15th consecutive first-class match.

Their bowlers then got to work. Worrall and Roach could easily have picked up two or three wickets apiece during outstanding spells of swing bowling with the new ball.

Having Lyth caught at fourth slip was the least Roach deserved, but the tone had been set and there was no let-up when the West Indian and Worrall came off.

In his second over Tom Lawes, 19, went around the wicket and plucked out Bean’s off stump and after lunch found the thinnest of edges to remove Hill, who made a battling 28.

Worrall was finally rewarded during his second spell when Will Fraine edged another away-swinger to second slip.

There was a recovery by Tom Kohler-Cadmore and captain Jonny Tattersall, who added 72 in contrasting styles in 17 overs.

Kohler-Cadmore went on the attack, hitting Roach for a spectacular six over long-on and nine fours in his 55, but when he was caught behind aiming another big drive it was the first of three wickets in seven balls.

Dom Bess played on to Clark, who then had Jordan Thompson caught behind with a beauty which held its line and although Tattersall, with 45 not out, stood firm the tail offered little resistance.

Lawes bowled Ben Coad and finished with career-best figures of 4-31, Cameron Steel’s googly foxed Mike and Overton wrapped up the innings when Steve Patterson edged to second slip with Yorkshire four short of avoiding the follow-on.

“We’ve got an amazing bowling group. That’s held us in good stead throughout the season, on flat pitches and on wickets that nipped around a bit as it did here.

“Patience has been the name of the game throughout the season. We’ve just had to wait at times for those moments to capitalise and Thursday morning is one of those.

“We have to go out, put pressure on Yorkshire and move the game forward. And if it doesn’t happen in the first hour we just have to be patient and chip away.”

“The wicket’s got a little bit better, the ball’s got a bit softer and they’ve been in the field twice now.

“The first hour will be quite big. If we can get through that and calm everything down, you never know. We’ve got the batters in the sheds to get back into this game – Adam Lyth and Tom Kohler-Cadmore have been in good form.

“We’ve just got to keep grafting, as we’ve done all year. We’ve fought until the end and we need to do that again.”