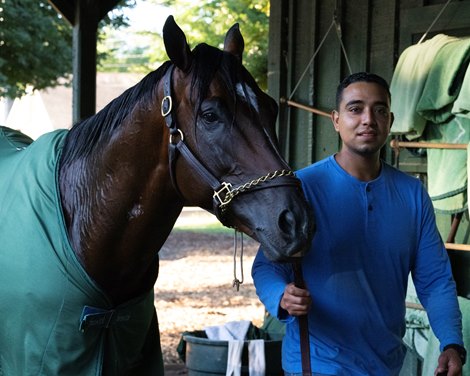 Despite a no-show performance in the Whitney Stakes (G1) at Saratoga Race Course earlier in the meet, Olympiad  is getting plenty of respect in the $1 million Jockey Club Gold Cup (G1) at the Spa Sept. 3.

The son of Speightstown  , who is owned by Grandview Equine, Cheyenne Stable, and LNJ Foxwoods, was made the 2-1 morning line favorite by New York Racing Association oddsmaker David Aragona.

In the five-horse Whitney, Olympiad was the 9-5 second choice behind 4-5 Life Is Good  and was never a factor. He finished fourth, 9 1/4 lengths behind Life Is Good.

Before that race, Olympiad had sparkled, winning his first five starts of the year, four of which were graded stakes. The Whitney was his first try in a grade 1 event.

Bill Mott, his Hall of Fame trainer, was asked if he was willing to draw a line through the lackluster performance in the Whitney.

“I guess you can’t,” he said. “You’ve got to look at it. It’s there, you know? We just hope we come back and put it behind us and he runs a better race this time.”

Olympiad will again be ridden by Junior Alvarado, who has been on board in nine of his 11 career starts. In the Whitney, Olympiad had a wide trip, but, other than that, there was no real excuse.

Since the Whitney, he has had two works, the most recent coming Aug. 28 when he worked four furlongs in :49.94.

“He came back (from the Whitney) and he hasn’t missed any training,” Mott said. “He seems fine. We’re set to go.”

The Jockey Club Gold Cup will be Olympiad’s fifth start at Saratoga. He broke his maiden at the Spa in his second try as a 2-year-old and was second in an allowance race last September.