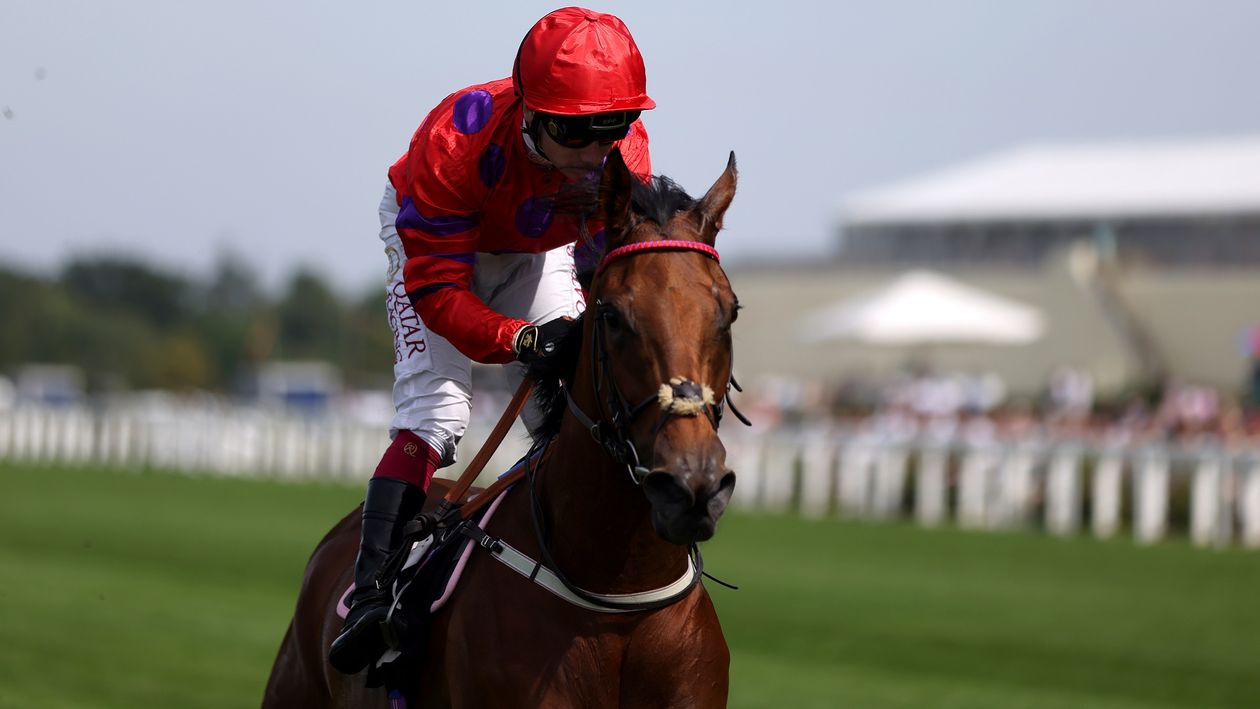 The mare was partnered by Kieran Shoemark for the one-mile contest and faced a field of nine rivals, which included 2000 Guineas winner Coroebus.

But as Charlie Appleby’s Coroebus was making his challenge around a furlong and a half out he crashed to the ground under William Buick.

Shoemark was clear of the field and of any danger at that stage and cruised to a comfortable five-and-a-half-length victory at 17/2.

But while Buick was able to get to his feet, it was subsequently confirmed Coroebus – who also won the St James’s Palace Stakes – had suffered fatal injuries.

“She has just stepped her form up there, back in trip,” Walker told Sky Sports Racing.

“Fair play to Kieran, we came over together and we spent about four hours talking about the race and eventually I just said ‘do your job, do what you’re paid for’ and left it to him and he absolutely nailed it.

“It wasn’t tactically obvious what was going to happen, she’s not a straightforward ride and ever since he sat on her in the Sun Chariot he’s got on incredibly well with her. I think we’re reaping the rewards of that.

“She’s an eight- or nine-furlong horse, we would love to have a go at the Filly & Mare Breeders’ Cup race. It’s nine and a half furlongs this year, with two turns, but I think it would be perfect for us.”

Of the chance of Dreamloper targeting the Sun Chariot before the American meeting, Walker said: “The gaps to the Sun Chariot are perfect, but she’s been busy and she’s been travelling, she likes gaps between her races so we might just freshen her up.”

Shoemark said of the victory: “Back to a mile, she’s got plenty of speed and she travelled good today. She showed her turn of foot today, she was very effective, she’s two from two at Longchamp. It was very straightforward, the gaps came when we needed them, it was an enjoyable ride round.

“It felt pretty quick to ride and she wants quick ground, she ran in the Pretty Polly Stakes at the Curragh and it was too soft for her. She didn’t stay in the Nassau last time over 10 furlongs so she was back in trip today, we saw her at her best over a mile. A mile, I think, is her optimum.

“I needed to find a filly like this, I had an exceptional year last year with Lady Bowthorpe, I didn’t know where the next Group One horse was going to come from.

“I found one quite early on into the season and she’s provided me with another Group One. I’m just absolutely delighted and grateful to Ed Walker, and to Molly Stratton, who rides her out every day. I feel very lucky to be part of this mare’s story.”

If Dreamloper were to run in the Breeders’ Cup it would be a first experience of the meeting for the jockey, who is confident she will handle the track and the trip.

“It is a two-turn track, an easy trip round, so that shouldn’t be an issue at all,” he said.

“It would be huge, it would be my first trip over to the Breeders’ Cup, I think I might have another couple of rides who could be going, but I think she might be my best chance going out there. It’s very exciting.”

Shoemark then collected the mount on Simon and Ed Crisford’s West Wind Blows in the Group Three Prix du Prince d’Orange, winning the race in place of Buick who missed the ride after his fall from Coroebus.