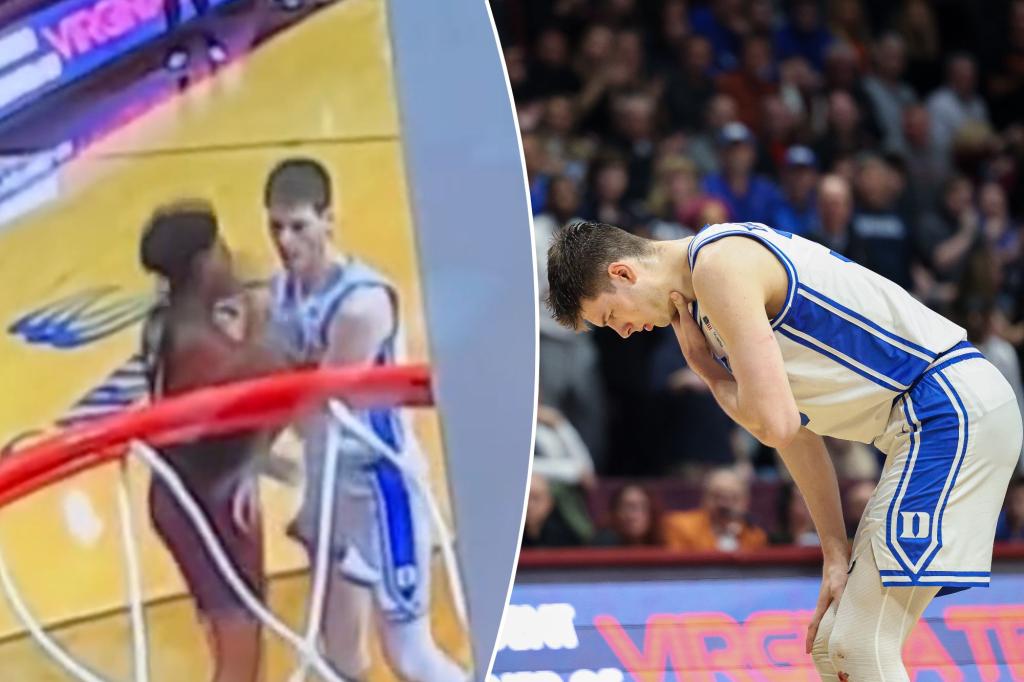 The final 15 seconds of the Duke vs. Virginia Tech school hoops recreation Monday night time had all the pieces: A go-ahead shot, a throat punch, a no-call, and a few vomit.

With the sport tied at 75 and below 20 seconds left, Hokies guard MJ Collins took a cross close to the fitting baseline, dribbled into the painted space, and hit a brief jumper to offer Virginia Tech a 77-75 lead. He then cocked his fist again to have a good time – however within the course of, ended up punching star Duke freshman Kyle Filipowski immediately within the throat.

Filipowski collapsed to the bottom, and Collins pulled again his fist instantly upon contact, signaling that it was an accident. The officers reviewed the play and didn’t name a flagrant foul – or any foul in any respect.

A flagrant foul would have given Filipowski two free throws, and thus an opportunity to tie the sport.

Filipowski nonetheless appeared shaken up because the crew went again to the sideline, with cameras catching him hunched over in his seat. The 19-year-old apparently even threw up within the huddle.

“Yeah, he simply elbowed me proper in my Adam’s apple,” Filipowski advised reporters after the sport. “I couldn’t breathe for a minute, however I simply wanted to throw up and I used to be good.”

“He was full-on throwing up and he wasn’t about to be out for a second,” Duke head coach Jon Scheyer added. “He’s a big-time warrior, man.”

Duke’s Tyrese Proctor missed a go-ahead 3-pointer on the following possession and the Blue Devils turned the ball over with their last-gasp try after Virginia Tech break up a pair of free throws.

Virginia Tech held on to win the sport, 78-75, handing Duke their fourth highway loss in 5 tries away from house. Three of the Blue Devils’ subsequent 5 video games are on the highway, together with two top-20 groups in Virginia and Miami.