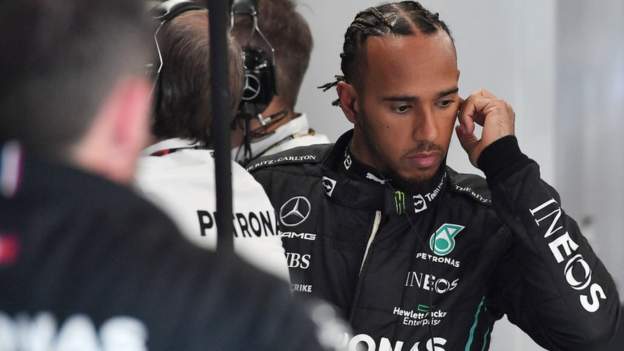 Lewis Hamilton admitted that he was driven to “the edge of breaking point with my emotions” after seeing what he believed was a possible win in the Dutch Grand Prix snatched from his grasp.

Max Verstappen took yet another consummate victory – his 10th in 15 races so far this year – as he marches serenely to a second title that is now inevitable. But the story of the race was that Mercedes came closer than ever before this year to taking that elusive win.

When a strategy decision during a late safety-car period left Hamilton in the lead, but vulnerable to Verstappen – much as he had been last year in the title decider in Abu Dhabi – it all became too much for the seven-time champion.

He swore at his team over the radio, railing at what in the heat of the moment felt like an opportunity thrown away.

That one of the two safety-car periods that prevented Hamilton and team-mate George Russell heading into the final 10 laps of the race running one-two came under suspicious circumstances involving Red Bull’s sister team only made those emotions stronger.

Out of the car, the adrenaline no longer flooding through him, Hamilton apologised.

“I don’t even remember what I said,” Hamilton said. “I just lost it for a second. But I think they know that there is just so much passion.

“I want to look at it as a glass half-full. We came here struggling from the last race. We were fighting against the Red Bulls. We were quicker than most at many points.

“So many great things to take from it. The car was finally working. If this can be the same in the future races, we’re going to be continuing to breathe down their necks and we’re going to get that win.”

What if the race had run without safety cars?

A week ago, at high-speed Spa, the Mercedes was out of its “sweet spot”. In Zandvoort, a circuit demanding higher downforce, and with a different mix of corners, it was very much back in it.

Hamilton was in with a shout of pole, before Verstappen’s team-mate Sergio Perez spun at the end of qualifying and prevented both Mercedes drivers completing their final laps.

As Hamilton pointed out: “I was pole until the last corner, I was 0.07s up on Max. They are quicker on the straights so even if I’d got through the corner quicker than them, most likely he would have just pipped me at the line. But still that’s a huge positive to take and then our race pace seems to be better or as good as everyone’s.”

At their pre-race strategy briefing, Mercedes agreed that they would take risks if it gave them a chance to win. They approached the afternoon in that frame of mind, and made every decision based on it.

They committed to a one-stop race, while pretty much everyone else went for two.

As the various strategies played out, and the race entered its final third, Verstappen was leading from Hamilton and Russell, but the Dutchman had to stop again and the Mercedes drivers did not.

Had the race carried on with no caution periods, Verstappen would have pitted and dropped to third. On soft tyres with the Mercedes on used hards, he would have had to catch and pass both Mercedes to win.

“When I swapped to the medium [after my first stop], they were still doing good lap times [on their long first stint],” Verstappen said.

“Then, when they swapped to the hard, I was interested to see their pace. I thought: ‘That’s quite quick.’ I was trying to push up a bit. It was very surprising they made it work. I knew it might get close at the end with the way strategies played out.”

Would Verstappen have done it? Mercedes’ strategy predictions said he would have come out eight seconds behind. It would have been close, the computers said, but they reckon Verstappen would still have won – but not easily.

After pitting for tyres, Tsunoda stopped on track on lap 44, and said over the radio that a wheel was lose. He undid his belts and started to climb out. No, the team said, the wheels are all fine. Carry on.

So he drove slowly back to the pits. Alpha Tauri strapped him in, and sent him out again, only for him to stop out on track, for good this time. Which required officials to deploy the virtual safety car so the car could be moved to a safe place.

For Verstappen, this was “a bit unfortunate”, because while a VSC means a pit stop that costs less time, he still needed to fit fresh tyres, so Red Bull had to call him in. But it was too early for a set of softs, so they fitted hards, which Verstappen had not wanted because he did not like the feel of the car on them.

As Mercedes saw it, Red Bull’s sister team had acted in an extremely odd way that had given their lead driver a major advantage, allowing him to pit and retain the lead, rather than drop to third.

“If we were fighting for the championship, that would be something I would closely look at.” Mercedes team boss Toto Wolff said.

“Now I think what needs to be investigated, for the safety of drivers and everybody, the driver stopped, unbuckled, drove a full lap, came in, the problem wasn’t solved, they put the seat belts back on and he drove out and stopped the car again and that probably changed the outcome of a race that we maybe could have won.”

Race stewards did investigate the incident – and reprimanded Tsunoda for driving back to the pits with the belts undone. It seems they did not look into Alpha Tauri’s actions. There was “no evidence” of any wrongdoing, a spokesman said, pointing out the FIA has access to a lot of data and all team communications.

This was not the end of Mercedes’ hopes, though. Mercedes had also stopped under the VSC, to fit fresh medium tyres. When racing resumed, Verstappen was leading Hamilton by 15.4 seconds. But, as he had feared, he did not get on well with the hards, and Hamilton started closing in.

Six laps later, with 16 to go, the gap was down to 10.7secs. Was the win on again for Hamilton? In the Red Bull, Verstappen thought not. “The gap after VSC was still big enough to manage,” he said.

The safety car – and a Hamilton error

There was another twist, when Valtteri Bottas’ engine failed and he stopped his Alfa Romeo on the main straight. Safety car.

Verstappen pitted again, for soft tyres. Initially, Mercedes left both cars out on their lightly used mediums, so they were briefly one-two again, with Verstappen third.

But the safety car led the field through the pits and Russell said he wanted softs because he could feel the mediums fading. The change dropped him back behind Verstappen. Hamilton, who did not change tyres, was still in the lead, but he now had no buffer.

Wolff said: “The thinking was we had a medium that had five racing laps on it and the track position and we took that decision.

“I don’t think on a par with the same tyre we could have overtaken the Red Bull with their straight-line speed. We saw that with [Ferrari’s Carlos] Sainz at the beginning, who had less pace, we weren’t able to pass him. So that was the call.

“Every single day I would rather risk everything to win rather than cementing second and third.”

Hamilton knew he was in trouble, saying over the radio it would be difficult to hold the drivers on softs behind, and so it proved. Verstappen was past him by the first corner after the restart.

Russell said: “We made a bold decision to go for the win. Had we both pitted, we would have conceded position to Max. Had we both stayed out, we would probably both lose to Max as well. The best chance was splitting it and here we are.”

In hindsight, Mercedes felt the right call would have been to stop both drivers, because Hamilton not only lost out to Verstappen but also to Russell and Leclerc.

But at the same time, they could not factor in what happened. Hamilton did not admit after the race, but he had made a mistake. He had the engine in the wrong mode at the restart. That’s why Verstappen found it so easy to pass so soon – Hamilton was down on power.

“I really thought we were going to be fighting for the win,” Hamilton said. “It was finally there, within our grasp, and then the safety car came out and completely screwed us and then I am sitting there, I’m in the lead but I know no matter how good a restart I get I won’t be able to keep them behind.

“To see it slip through my fingers, there was such an outburst of emotions, so apologies to my team. But I don’t want to apologise for my passion – that is sometimes how it goes.

“But there are so many positives to take from this weekend. We were finally there fighting the Red Bulls and that is a great, great feeling and I want to take that forwards.”

Can Mercedes get that elusive victory in the remaining seven races?

Russell believes they are on the cusp, saying. “Ferrari are in our sights in P2 in constructors’ and drivers’, but our target is to win a race and it’s exciting to see how we are closing the gap.”

But he is also realistic: “I think we had the fastest car today but we are not going to be able to fight for victory if we keep qualifying so far down the grid.

“There is no doubt we have the race pace to be able to win. Ultimately it will come down to qualifying. We need to find a bit more magic in qualifying.”

And a word for Verstappen

Amid all the Mercedes drama, Verstappen took another consummate victory. Ferrari team boss Mattia Binotto admitted he was concerned that it has now been three consecutive races in which they have not been competitive, and Leclerc has effectively conceded the title.

“The Red Bull is the faster car at the moment especially in race pace,” Leclerc said. “In qualifying we are very close. Mercedes seems to have gained a bit of pace in the races, too.”

Effectively, Red Bull have simply edged ever forward, and Verstappen said that their season-long programme of trying to reduce the weight of the car had transformed it for him.

“When the regulations changed, you have to start over,” he said, “and the car was not fully to my liking. But also the car was quite heavy and reducing the weight it all felt a bit more agile.”

In his hands, it is now the best car in the field, but there is also no doubting the quality of the driver.

Verstappen said: “A lot of it is down to the team. That is also how Lewis won his championships. Your car is super-important. But when you are an exceptional driver, like Lewis is as well, you make the difference over your team-mate at the time in very crucial races.

“For me, one that stood out for him was Turkey [in 2020], when it was very slippery, staying calm not making mistakes. You end up winning a race.

“That is what good drivers do: they make the difference compared to other fast drivers but not as good.

“The car is very dominant in F1 but between the team-mates only one can win and that’s where you have to make the difference.”