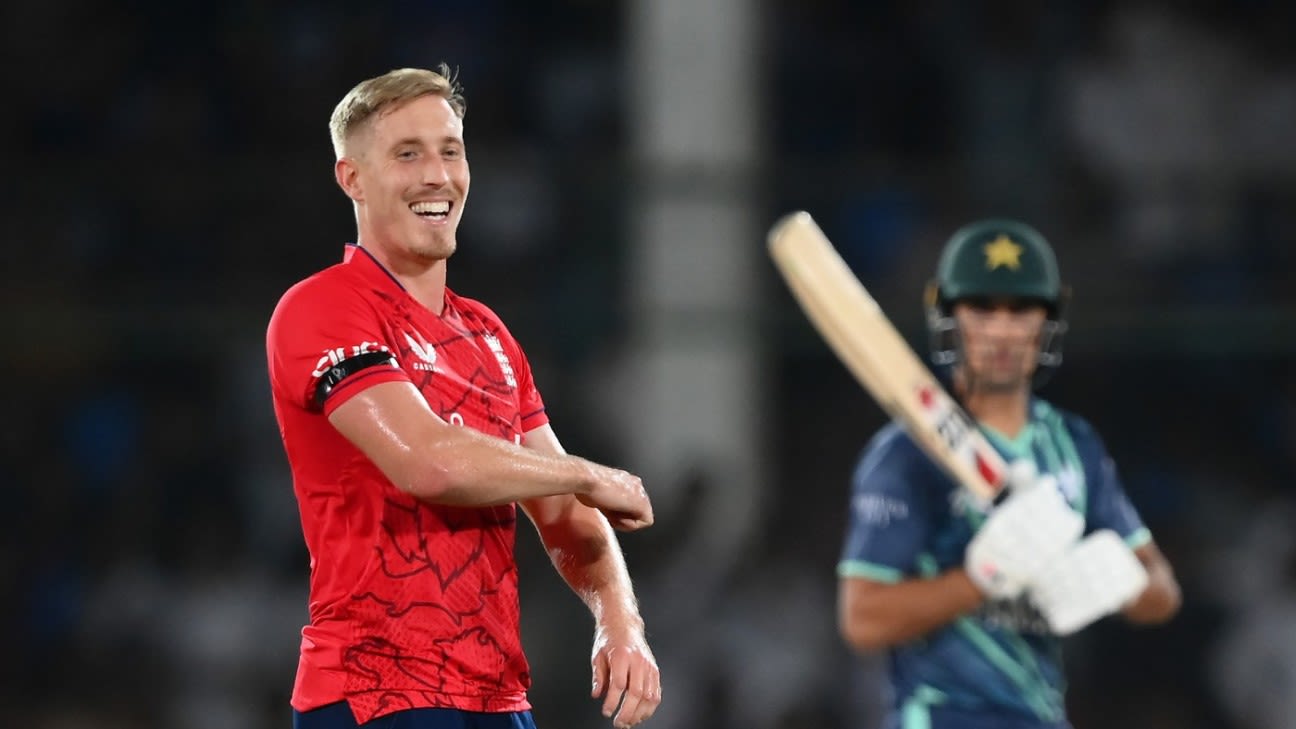 Pakistan is the spiritual home of left-arm fast bowling so the team-sheets in Tuesday’s night opening T20I seemed incongruous: England picked three left-arm seamers in their side to Pakistan’s none.

Along with Reece Topley, who was unavailable for the first game of the tour due to an ankle niggle, Sam Curran and David Willey will both travel straight from Pakistan to Australia ahead of the T20 World Cup, but the left-armer who will fly home to the UK from Lahore in two weeks’ time was the star of the show’s first act.
Luke Wood had known for a couple of days that he would make his England debut in Karachi. After getting the nod from Jos Buttler, he told his parents, then had to check his dad would keep the news quiet – “he’s quite keen on Facebook, he likes to post things”. Buttler duly presented him with his cap in the pre-match huddle.
Buttler’s injury meant that Wood had the familiar feeling of being captained by Moeen Ali – they won the Blast together in 2018 when Wood was on loan at Worcestershire – but the sense of occasion was not lost on him as he stood at short midwicket. He had played at the National Stadium for Quetta Gladiators earlier this year, but the crowd was then capped at 25% by Covid-19 restrictions.

“The start got delayed because they were moving behind the bowler’s arm so you got a full chance to take it in,” Wood said. “I remember being stood at midwicket thinking ‘this is proper’. It was so loud. You know they love their cricket but it was pretty special. To have that on your debut makes it even better – it’s like ‘wow, this is international cricket’.”

The crowd were vocal throughout the first half of Pakistan’s innings but died down as England’s bowlers dragged the game back. They fell collectively silent when Wood took his first international wicket, ripping Mohammad Nawaz’s off stump out of the crowd before leaping and punching the air in celebration.

He finished with figures of 3 for 24, conceding only 12 runs from his two overs at the death. His second and third wickets were less spectacular – both caught in the deep, one off a full toss and the other off a slower ball – but were just as important in restricting Pakistan.

“Your first wicket is the one that stands out in your memory and thankfully it was a good one,” Wood said. “That’s how I always play my cricket: there’s always a smile on my face and that’s something I really pride myself on. It just shows my love for the game. It was just about trying to enjoy my debut as much as I could.”

Wood is well aware of Pakistan’s tradition for producing left-arm seamers, having idolised Wasim Akram growing up – “him and Ryan Sidebottom were my two” – and had the chance to pick Wasim’s brains at the PSL earlier this year: “That was pretty cool. I’ve always wanted to meet him.”

He is also keen to play his part in busting the “huge myth” that left-arm seamers are only picked to provide variety. “Teams can play four right-armers but can’t play four left-armers? I’ve just never understood that,” he said.

“Obviously England have a lot of good left-arm fast bowlers now so the options are there, but also, we’re all different: different heights, speeds and attributes. Just because they’re all left-arm, it doesn’t make a difference.”

Wood earned his place in this squad through an impressive domestic season, playing in the final of both English short-form competitions. He took 14 wickets for Lancashire in the Blast and 10 for Trent Rockets in their victorious Hundred campaign, regularly hitting 90mph/145kph and bowling aggressive new-ball spells.

He is one of several England players in an unusual situation during this series, one mirrored in Australia’s tour to India: even if he finishes as the leading wicket-taker on either side, he will not be part of their World Cup squad, barring an injury to one of England’s first-choice seamers.

But he knows that strong performances will come in handy down the line. “We had a big chat before this series started about the fact it’s not just about this series, but going forward. Being pretty new into the squad, it’s about trying to perform and showing what I have. Everything changes so quickly.”

And after missing out on an England cap in the Netherlands earlier this year – he was the only unused squad member during their ODI tour – Wood is not taking things for granted. “I would have loved to have made my debut there,” he said, “but at the same time, I feel like because they don’t just give them out, you feel you have earned it. In a way, it makes it feel more special.”

Matt Roller is an assistant editor at ESPNcricinfo. @mroller98