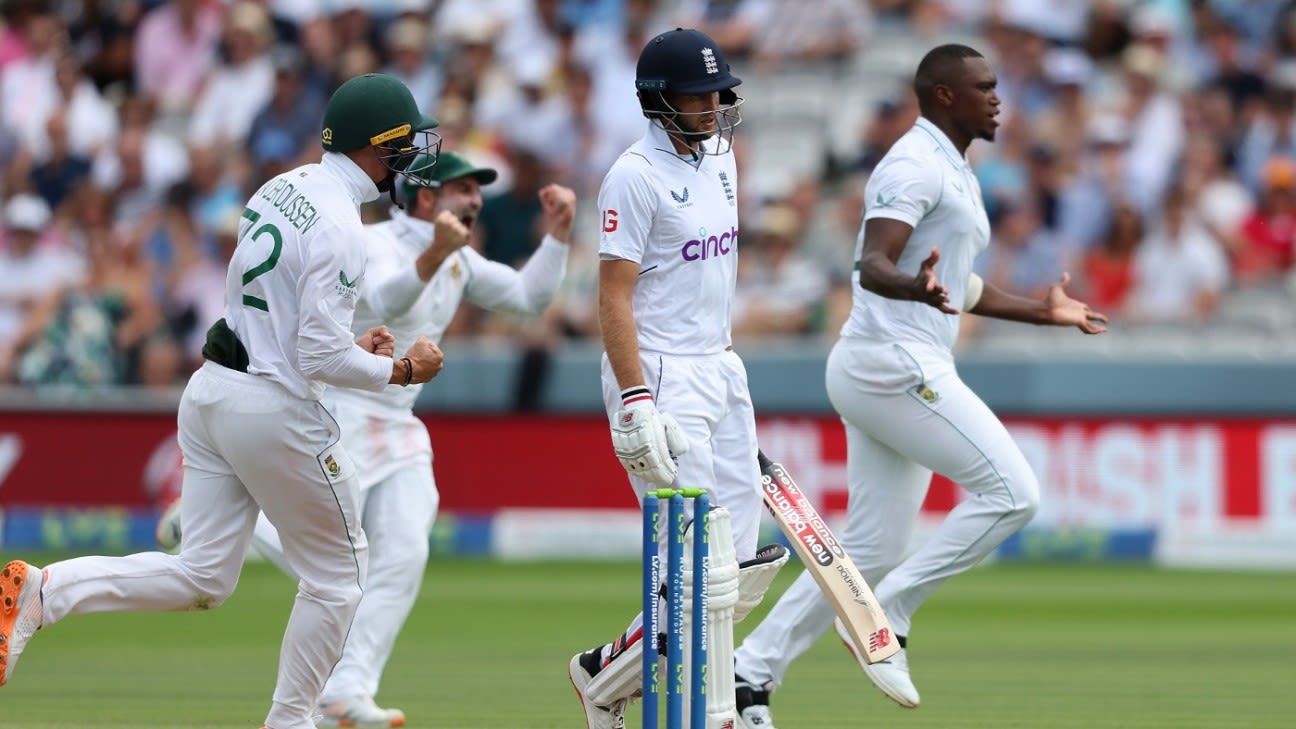 Some golf was played, but only some, and no serious injuries were sustained during South Africa’s week off between the second and third Tests. Mostly, their break was about chilling hard as they approach the end of what bowling coach Charl Langeveldt called a “long tour for both the coaches and the players”, which has ebbed and flowed in extremes.

The teams have matched each other almost blow-for-blow in results (one ODI apiece, one T20I apiece before South Africa clinched the series, one Test win by an innings apiece), personnel issues (Rassie van der Dussen will miss the third Test and see a finger specialist while Jonny Bairstow will be missing, too, off to see an ankle specialist) and playing styles (with the accepted narrative that their bowling attacks are similarly strong but England’s middle-order is ahead of South Africa’s) and there’s one fixture left to separate them. For Langeveldt, South Africa’s task is simple, though “easier said than done”: runs on the board and wickets in the bag.

“If you don’t score enough, you’re not going to win Test matches. That’s the bottom line,” he said, repeating captain Dean Elgar’s assessment of where the Old Trafford Test went wrong. “And with the bowling, we had good spells but I felt we hadn’t got enough balls to put pressure from both ends. Sometimes we just have two soft balls, we release the pressure and that’s it. If we can touch up with that, we can restrict them, bowl them out cheaply and then bowl them out again. It’s easier said than done.”

Langeveldt can’t speak for South Africa’s batting except to say that he believes it’s “improved” recently and it only needs to be able to do just enough to give the bowlers something to work with. Anything, really, because Langeveldt is bullish about their abilities and their resolve to get even better. “When we’ve got runs on the board, we’ve got the bowling attack to put them under pressure. We’ve got a saying – 18 consecutive dot balls gets us a wicket,” Langeveldt said.

That’s more of an ideal than a mantra at the moment, because South Africa have not bowled 18 successive score-less balls in the Test series so far. Their longest string is 15, in the first innings of the second Test, and that didn’t result in a wicket. The most number of dot balls they’ve bowled before taking a wicket is seven, and it came before Marco Jansen dismissed James Anderson to conclude the first Test.

But Langeveldt had a broader point about closing down scoring opportunities and creating pressure. “It’s no use if one guy is bowling well from one end and we are leaking soft boundaries – not a lot of boundaries – but sometimes, we release the pressure and we need to touch up on that. If you get 18 balls in a good area, you ask good questions and you’ll get a wicket.”

South Africa have conceded a boundary almost every two-and-half-overs (15.5 balls) in this series, compared to England’s boundary every three-and-half-overs (20.9 overs). That allows batters a release. When they’re able to plug that, they take wickets. Of the 30 England wickets to fall in the series so far, 13 came after a period of at least two boundary-less overs.

The bowler chiefly responsible for that is Lungi Ngidi, who has taken on a new role of controlling the innings. Ngidi has the lowest economy rate among the South Africa bowlers – 2.93 – and has conceded the fewest boundaries among the seamers – 10 in 180 balls (or a boundary every 18 balls, as luck would have it). He does most of it at speeds of 140kph, with the slower-ball variation as a trump card.

“Lungi has impressed me. His pace has been up. He has worked hard,” Langeveldt said. “He went to the IPL and I said just work on your fitness and work on just getting your action repeatable. He has also developed the slower ball and spent a lot of time with Dwayne Bravo and then there are other things that we have been working on – to get the wide yorker, the straight yorker and slower-ball bouncer right. But his slower ball has come a long way and people really struggle to pick it up.”

Ngidi’s development as a bowler saw him preferred over Jansen for the second Test, where South Africa fielded two specialist spinners in anticipation of a surface which would take turn in the last two days. The match did not last long enough to see if their selection was justified and it’s too early to tell if they will go the same way the The Oval. While Langeveldt called it the “best English summer ever” because of how hot and dry it has been, four days before the third Test the pitch wore a healthy covering of green grass and with rain forecast in the lead-up to the match, a return to four quicks might be more likely.

All of them, along with van der Dussen’s replacement in the squad, Wiaan Mulder, were training at full tilt on Sunday, South Africa’s second day back at work after their break. They returned to the nets on Saturday at London School of Economics grounds in New Malden but plan to lie low on Monday before final preparations begin on Tuesday. That’s also when England will regroup after 10 days apart and some golf. The decider awaits.

With stats inputs from Shiva Jayaraman