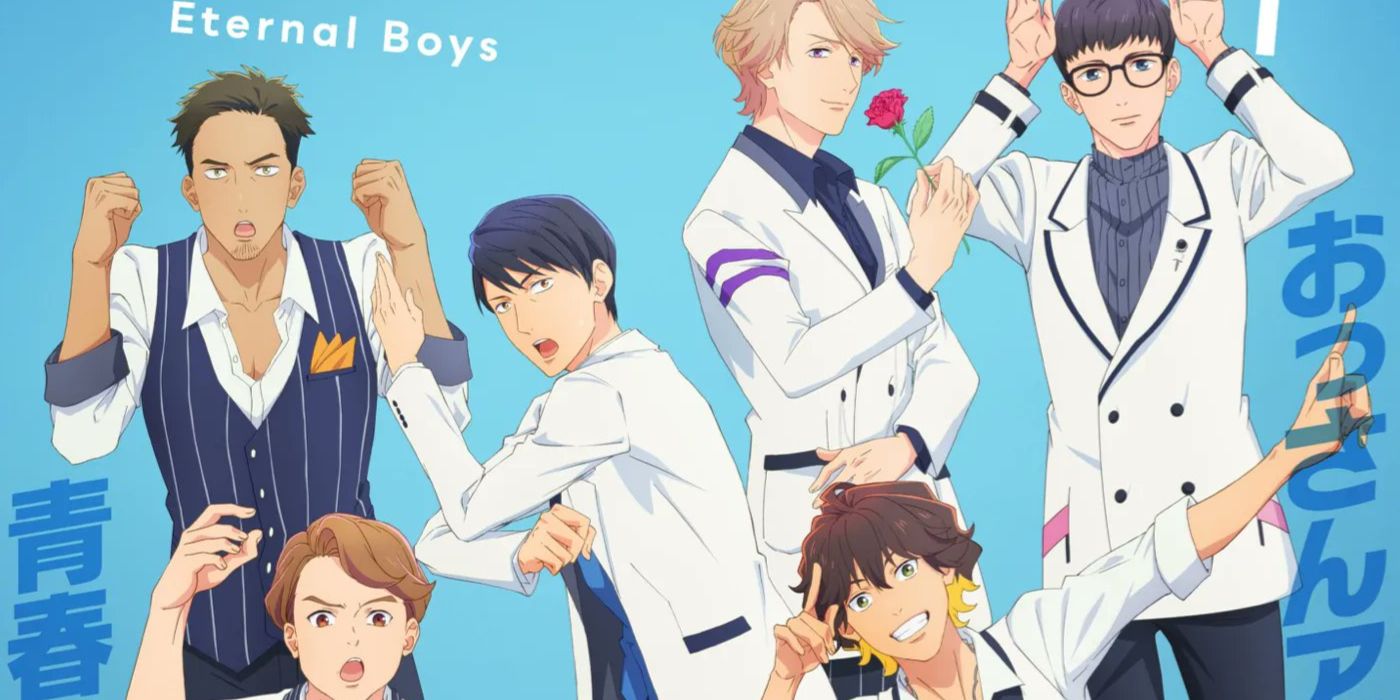 The Fall 2022 anime season is just around the corner, bringing in a bunch of new titles. This season will be bringing back big hits like Spy x Family and My Hero Academia, as well as promising new titles Chainsaw Man and Blue Lock.

Eternal Boys is neither a returning show nor is it based on a bestselling manga. It’s a new, original anime being brought to life by LIDEN FILMS, and here’s why it’s still worth keeping an eye on.

What Is Eternal Boys About?

Most idols enter the entertainment industry when they’re in their teens, which is often considered to be the prime age to debut. Not the titular Eternal Boys. This idol group is made up of middle-aged men, with the youngest being thirty-five and the oldest, fourty-five. These men all come from different walks of life: a salary-man, a high school teacher, a soccer player, child actor turned enka singer, a host, and a management head. The one thing these men have in common is that they have no experience working in the idol industry, and they’ve all either quit or have been relieved from their previous jobs.

Rather than relying on industry knowledge, these men will be relying on their many years of work experience to make it big in the world of entertainment. With their varied work histories to guide them, these men intend to prove that there is truth behind the old saying “age is but a number”. Although it may not be their amateur levels that get in their way of stardom, but rather, their aching backs.

Eternal Boys features a mix of new blood and veterans in the industry. This will be the second anime directed by migmi, who debuted as a series director last year with Suppose a Kid from the Last Dungeon Boonies Moved to a Starter Town. The character designs are done by ma2, and while they have penned manga in the past, this will be the first time that their designs will be used for televised anime. The music will be composed by Yukari Hashimoto, who is no stranger to composing for comedic works like Monthly Girls’ Nozaki-kun and Mr. Osomatsu.

The main cast is made up of veteran voice actors that have been in the business for a while, but in contrast, much of the supporting cast is made up of newer actors. A manga adaptation began serializing in Comic Gene last April, although it is unlikely that the manga will be released in English any time soon, as most manga based on anime originals almost never get official English releases. RELATED: Why Anime Movie ‘Bubble’ Couldn’t Live Up to The Hype

Where to Watch Eternal Boys

Eternal Boys is set to premiere on October 11. It will air on Fuji TV in Japan and Animax in other Asian territories. As of writing, no English network has announced any plans to pick the series up for streaming. There are a few more weeks left before the show finally premieres, so here’s hoping that an official announcement will finally be made beforehand.

There are a lot of idol anime that Eternal Boys will have to compete with or live up to, but its unique premise is sure to pull in those looking for a fresh, new take on the idol genre. Because it isn’t based on an existing piece of media, no one yet knows what to expect from this series. But, for anime fans looking for middle-aged men performing in sparkly outfits, then Eternal Boys should be right up their alley.