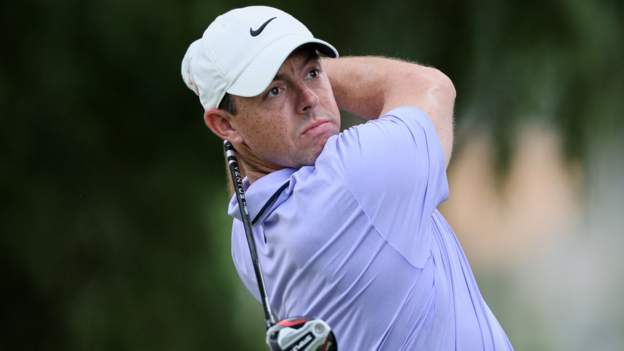 Rory McIlroy carded a level-par opening round of 70 at the FedEx St Jude Championship to sit eight behind leaders Kim Si-Woo and JJ Spaun.

McIlroy had an inconsistent day with four bogeys, including two in the first six holes, and four birdies.

England’s Tyrrell Hatton is three shots back following a bogey-free opening round of five under in Memphis.

South Korea’s Kim landed an eagle on the final hole to go into the lead alongside bogey-free American Spaun.

Northern Ireland’s McIlroy, who had earlier welcomed the decision to ban three players from the Saudi-backed LIV Golf Series from competing in the play-offs following a court bid, struggled from the off and bogeyed the first.

A second bogey followed on the sixth and, despite a birdie on the following hole, the 33-year-old dropped another shot on the 11th.

Three birdies and another bogey in the final six holes completed the world number three’s up and down opening round.

It is McIlroy’s first tournament since he finished third at The Open, having led going into the final round – his fourth top-10 major finish this year.

World number one Scottie Scheffler struggled to a 71, while Australia’s Cameron Smith, who won The Open last month, is at three under.

American Tony Finau, who won twice on the PGA Tour last month, is with a group of players on six under.

Scotland’s Martin Laird is on four under, with compatriot Russell Knox at level par.

This week’s event at TPC Southwind is the first of three tournaments to decide the Tour champion, with the winner picking up $18m (£14.8m).