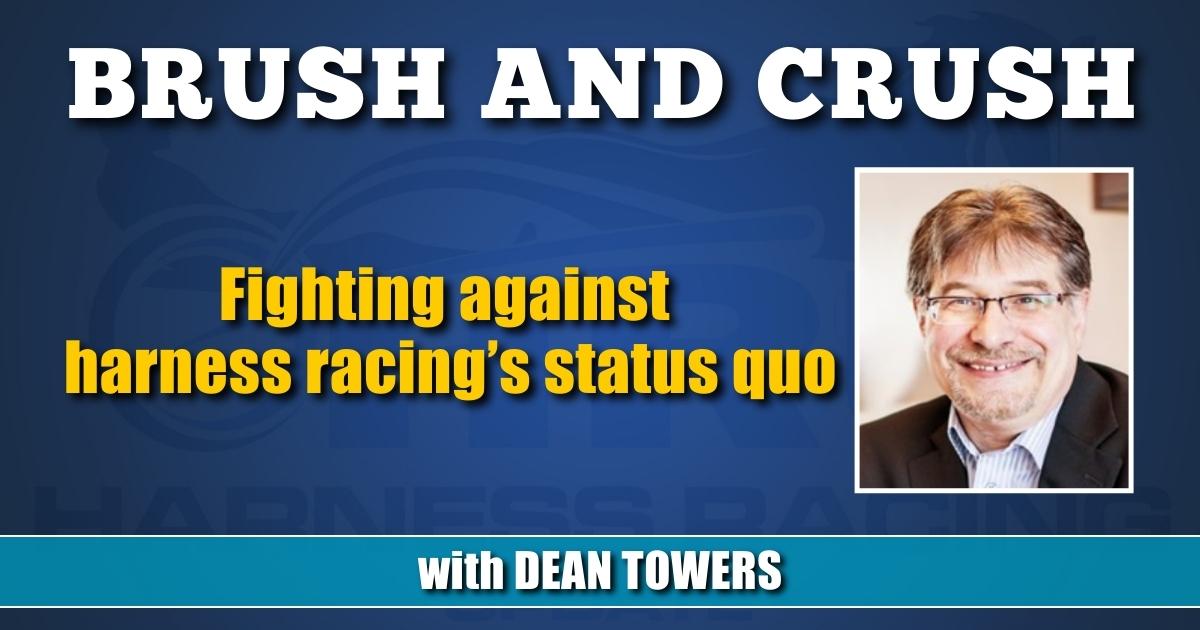 Scioto, the Meadowlands and Ontario Racing are experimenting with a range of new ideas.

We’ve often heard how harness racing clings to the status quo, even when the cries for change become deafening. It’s a warm blanket and it seems we fall back on it as much as we can.

However, a few entities in this sport have thrown that mindset out the window of late and are experimenting or trying new directions. They aren’t settling, just because they can.

Ten years ago, if you asked a hundred harness fans outside Ohio where Scioto Downs was located, I bet maybe five would know. It’s not like that anymore. In 2022, Scioto has entered the lexicon of tracks that customers find worth looking at.

Full fields and the willingness of drivers to mix things up has created some interesting racing, the result of which has been good prices (which is so important in a sport plagued with low ones). It’s not pure chaos, either. Scioto is one of the few racetracks where a $40 horse crosses the wire and when I look at the past performances, I can often see that the horse kind of figures.

The latest adventure for Gabe Prewitt and the Scioto team has been the $1 Pick 8. The jury is still out on this wager, but it is something new for players to examine, and it is attractive. As well, carryovers abound with the new betting menu, and we all know by now how carryovers mimic a takeout reduction and drive money.

Ohio has a vibrant slots program. It has a great American race in the Little Brown Jug. It possesses a track — Northfield — that has a good historical following. It’s doling out some solid purse money. Some might say that this is enough and would rest on these laurels.

The Scioto team hasn’t done that, and for that I send a hearty good cheer.

AT THE BIG M THE GLASS IS HALF FULL

I caught the racing at the Meadowlands on the last weekend in June, and I was impressed with the product. The races were fast and exciting; the drivers were on their games and the horses did not disappoint. Tremendous performances from the likes of Bulldog Hanover and Charlie May lived up to the billing and Rattle My Cage going toe to toe with Cuatro De Julio was a real barnburner. These races proved without a doubt restarting the Graduate Series was a good idea.

As for the Meadowlands overall (outside the GSY races which can, at times, not look like harness racing), I think things have gotten better.

I, like many of you, wish the “no holes” policy was determined by consistent judging – allowing holes, but only to get a horse out of the way, or to use for cover – but I can’t deny the racing is more contentious. A year ago, drivers waiting for cover and clogging the flow (which plagues harness racing at so many places) has almost been eliminated by executive fiat.

The partnership with Insideharness.com is the newest addition, with the goal of addressing long-term customer complaints. Telling the public what happened to a horse the previous week, how a horse is coming into a race, or off a qualifier, along with driver thoughts is a level of transparency this sport has never seen.

This is important, in my view, because it strikes right at the heart of one of this sport’s deepest critiques – that harness racing is “fixed.”

We all know Ron Burke and Tony Alagna are far too busy running a stable to engineer betting coups, and their comments on this website (if you have not read them, I suggest you give it a look) help your everyday fan now know that, too. The general comments thus far have shed light that when a horse is in the box, insiders are often as confused as bettors are. There’s no willingness to pull the wool over anyone’s eyes, and if a horse races better or worse than they expect, well, that’s racing. This is a fantastic lesson.

Say what you want about Jeff Gural and the Meadowlands team – and reading these pages we know several of you have opinions – but they aren’t running out the clock until a subsidy goes away. Good policy or bad, they believe the glass is not half empty, but half full.

Last up, I was watching – like every good Canadian boy – the Stanley Cup playoffs this spring, and I can’t even count the number of times I saw a television ad for Ontario harness racing. Outside the Super Bowl, the Stanley Cup playoffs are the highest watched sporting event in the country, with national brands paying top dollar for ad space, and harness racing was right in the thick of it.

After the slots contract was cancelled in Ontario and reengineered for the future, there was a lot of hand wringing. And to be fair it was not unwarranted as purse levels and the number of racetracks fell. But, true to their word, the Ontario government has sunk money into the demand side of the sport.

We won’t see harness racing commercials in the U.S. during the NBA Finals or World Series anytime soon, but we do see them in Ontario, right in prime time. That’s something many have wished for in this sport, and it truly is something different.

There’s quite a bit to grumble about in harness racing, and many of us wish the status quo did not have its boot so firmly placed on this sports’ neck. In the above three instances we are seeing something new; something innovative. The status quo is a comfortable excuse for never taking a shot, and as the Great One once said, we miss all the shots we don’t take.