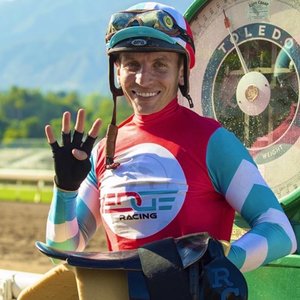 After circling the globe for a decade, French expat jockey has made a solid start to his reborn US career – as he tells Jon Lees

USA: At the age of 30, the French jockey Ryan Curatolo is perhaps a little young to be described as a journeyman.

He is, though, a ‘journey-man’ – or at least he has been for the last decade or so, leading a nomadic existence as he moved between different racing jurisdictions such as Japan, Macau, Singapore and Qatar, staying long enough to make his mark and then moving on again.

Either way, however, the well-travelled rider is hoping he may not need to move too much in the near future as his career in the US is picking up again – 11 years after his potential was first recognised with an Eclipse award nomination as an apprentice.

Although Curatolo was leading claimer in New York in 2011 with 115 wins, he lost out in the voting to Kyle Frey. For much of the period since, however, he has been riding nearly everywhere but the USA.

Curatolo arrived in California – coincidentally, where Frey is also now based – after a season in Dubai and, despite having few connections when he started, ended the Santa Anita Winter/Spring meet with 30 winners, enough to finish a respectable ninth in the standings.

Among the highlights was a four-timer on June 5 and two wins for Hall of Fame trainer Neil Drysdale on the mare Ever Smart. “To be honest I set myself a target of 20 wins,” says Curatolo.

“Four weeks ago I thought I’d be lucky to get 20 but over the last three weeks I got to 30. Two weeks ago I won four races; I hadn’t done that since 2011 in Belmont Park.”

Marseille-born Curatolo had only two rides at home after graduating from the French jockey school; both finished last. Aged 18, he decided the US would be a better environment in which to develop his career.

The young rider came to the attention of French expat trainer Patrick Biancone, who became a mentor and helped put him on a successful pathway before momentum was halted by a long injury layoff in 2013.

Curatolo re-emerged in Macau where he rode 100 winners over three seasons before a short but successful spell on Japan’s second-tier National Association of Racing circuit, riding a then record 29 winners for a foreign jockey. Stints in Qatar and Singapore followed before Dubai, where he was contracted to ride for Sheikh Ahmed Al Maktoum.

“I was supposed to go to Del Mar after Dubai last year but I didn’t ride because I was waiting for my visa so I went to France to visit my family,” he explains. “Because of Covid we had an issue with a visa and I was waiting for the embassy to give me an appointment and that didn’t come until September.

“I got my visa in October and straight off I flew to Los Angeles and started riding in the first week of November in Del Mar then started focussing on the opening day on December 26 in Santa Anita.”

Despite his previous experience in the US, what Curatolo found in southern California wasn’t entirely familiar. “I knew some of the jockeys from back in the day, but in the last five years the jockey colony has changed a bit,” he says.

“I pretty much started from zero,” he adds. “I’d never ridden there – the only time I’d ever been to California was for the Eclipse Awards ceremony in 2012. I didn’t know it at all but it was always a place I wanted to see and be at.

“For sure it was a gamble to come here. I had no security. Just like any place I’ve been, you do your thing and hope for the best. Thankfully it’s worked out.”

Until the Del Mar summer meet starts at the end of July, Curatolo will be galloping horses at Santa Anita interspersed with possible trips to Los Alamitos and Gulfstream Park. There are no plans to travel outside the country with his wanderlust seemingly satisfied.

“I enjoyed my time in Macau but then I started finding new places in Asia,” he explains “I went to Korea on holiday and met some owners and trainers who offered me a licence. At the time I didn’t accept it.

“So I went to Singapore to ride for one day and won two races so they offered me a one- year licence. Before that I was in Japan and I did well but there you can only stay three months.

“Opportunities just kept coming my way and I accepted some of them so I could discover new places and get more experience.”

He adds: “Because you can ride a bit heavier in California than on the east coast, I thought California would be the best place to be based if I wanted to give things a good go for the next five years. I feel good here.”

Jay Hovdey’s Favorite Racehorses: ‘I could be hopelessly beaten with 50 yards left and he would win by a neck’ – Gary Stevens on Exbourne

‘My whole life could be a movie’ – Logan Cormier, a jockey with a checkered past, stars in gritty film role