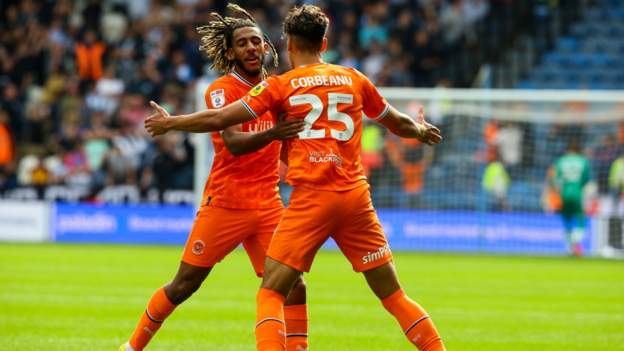 Huddersfield Town head coach Danny Schofield said he feels goalline technology “has got it wrong” as his side were denied an equaliser in their 1-0 defeat by Blackpool.

Theo Corbeanu scored his third goal in four games to secure the win for the Tangerines and pile more misery on the Terriers, finding the net shortly before half-time on the counter-attack, tucking away a rebound after Ian Poveda hit the post.

Yuta Nakayama thought he had scored a second-half equaliser for Huddersfield but Blackpool keeper Dan Grimshaw produced two superb saves to deny him from close range, as the referee and goalline technology ruled the ball had not gone in.

Blackpool climb up to 11th but Huddersfield remain in the bottom three with only one win this season.

The victory means Blackpool ended a run of three games without victory and also a winless streak at the John Smith’s Stadium that goes back to 2007.

Huddersfield, who were beaten by Bristol City in midweek, have now lost five of their seven matches in the league this season.

‘We feel the ball was clearly over the line’

The talking point of the match, however, came midway through the second half as Nakayama thought he had equalised for the Terriers from a corner, even running off starting his celebrations.

Grimshaw kept out his first header and the follow-up effort at the near post was ruled to have not gone over the line, despite insistence from Huddersfield that it had crossed.

Schofield spent a lengthy period after the full-time whistle speaking with the match officials and said he would appeal against the decision if the club are able to.

“It’s a difficult one to take. Straight after the game I went to the bench and watched the footage back and felt clearly it was a goal,” Schofield told BBC Radio Leeds.

“I wanted that clarity in my mind before I asked the referee to explain the reason behind not awarding it because I feel as though it’s a clear goal.

“Watching it back on different angles as well we feel the ball was clearly over the line.

“He’s pointed as his watch so he’s governed by Hawkeye or goal-line technology – he’s making the decision on that. If that’s the case, I’m not blaming the referee for his decision, it’s very difficult without the technology to make it.

“But if that’s the case it feels like technology has got it wrong this time.”

The Terriers had every reason to feel slightly aggrieved to be trailing at the break, having controlled the first half with the majority of possession and chances.

Sorba Thomas cut inside and forced Grimshaw into an early save, Danny Ward sent another good effort wide while Grimshaw was called on again to twice deny midfielder Jack Rudoni.

Jerry Yates arguably should have put the visitors ahead when Lee Nicholls fumbled a loose pass, but the forward could not capitalise on it.

When Corbeanu did break the deadlock seven minutes before half-time it came after a period of pressure from Huddersfield and against the run of play.

Jordan Gabriel won the ball in the home side’s half, broke down the left and picked out Poveda in the box. When his shot bounced off the woodwork, Corbeanu did not miss the follow-up.

Winger Thomas proved a constant threat for Huddersfield, who also saw Jon Russell curl a shot narrowly wide of the post as the hosts tried in vain to find a late equaliser.

“I’ve not looked back at it and I’ve done that purposely, but I’ve been told it was potentially over the line and that’s not great from their point of view.

“I’ve been in the game a hell of a long time, though, and I know these types of things can happen.

“They have happened against me before and I know the club were on the receiving end of one last season against QPR.

“We changed our shape, so that was something new for the players because I thought that it could help us on the transition and turnover and it certainly did.

“As much as we were under a bit of pressure in the second half – I never felt uncomfortable if I’m being honest.”