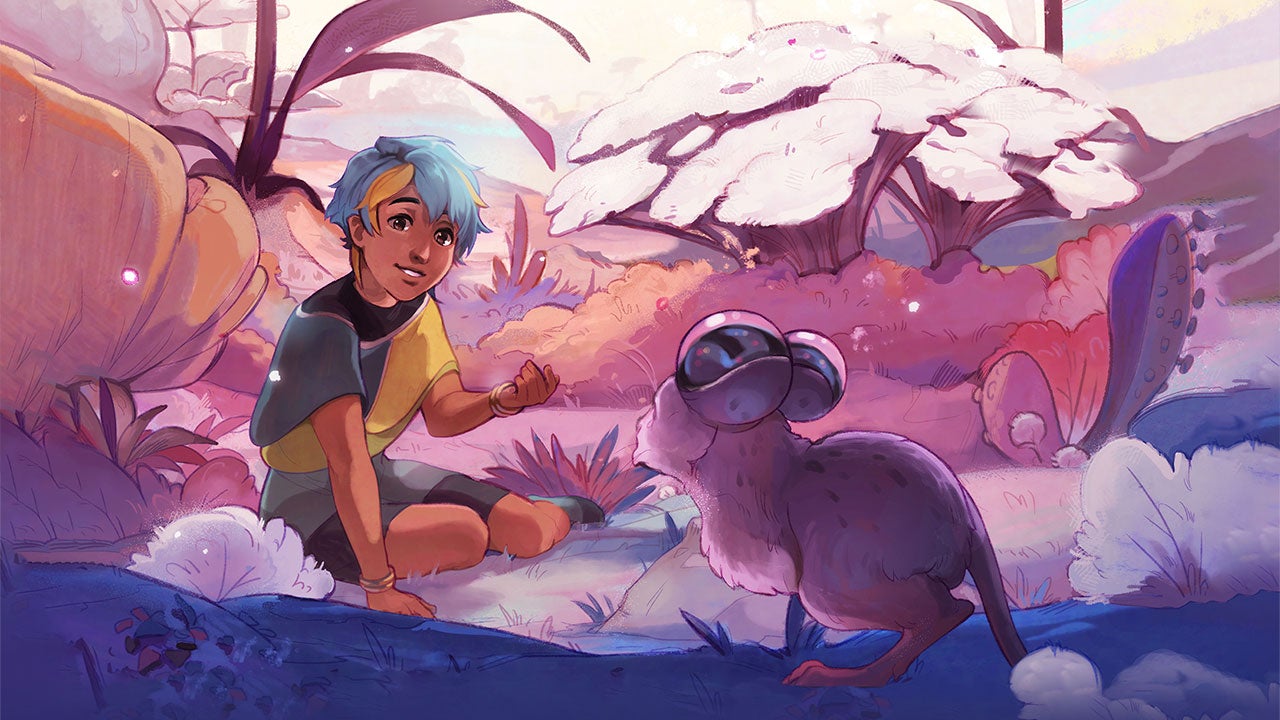 The first hour of I Was a Teenage Exocolonist is dictionary definition coziness, by and large. There are vague hints of outside or future threats to the space colony on the planet Vertumna, but within the walls of the colony my 10-year-old protagonist is safe in a world of cotton candy trees, gentle guidance from adults, simple school lessons, and low-stakes interactions with peers. I chose to fill my days with sports, digging in the fields to help the colony, and occasionally studying engineering.

And then, one of my friends died – suddenly, seemingly unpreventably. I was crushed. They had been a favorite character of mine so short a time in. And from there, the pastel loveliness of the colony dimmed a bit, and the world of Vertumna became a bit more grounded, a bit more human.

I Was a Teenage Exocolonist deftly balances the dichotomy of its soft aesthetics and loveliest moments with stories of grief, conflict, confusion. It is, after all, a tale of growing up. The protagonist is a child brought to Vertumna with their family to build a new life with a colony on a (so we think) uninhabited planet, where the colonists have big dreams of freedom from capitalism in an (at first) peaceful, self-sufficient society. You play through year by year, choosing which activities in the colony you’ll engage in each season, which in turn influence your stats and unlock different careers and paths for the young exocolonist. Your decisions, knowledge, who you choose to befriend, and how you interact with the rest of the colony will ultimately influence both its direction and yours as you grow to age 20.

It’s a brilliant encapsulation of what creator Sarah Northway tells me she set out to do when she first began working on the game in 2017. Her vision at the time was of a life simulator in the style of Princess Maker – a Japanese series where you’re the parent of a little girl and raising her to be a princess.

“It’s all about super crunchy stats and choosing what she does every day,” Northway says. “I wanted to kind of take that, reverse it so that you are the person: there’s no adult, it’s not a creepy little girl thing, and it’s just your life growing up.”

But with five years and a lot more video game foundation to cook with, Northway and co-writer Lindsay Ishihiro were able to construct the premise in the context of an absolutely massive choice-based narrative. Northway speculates there are around 600,000 words, or “like six books basically” in I Was a Teenage Exocolonist. And it boasts 800 story events, 30 different endings, 25 jobs, and 10 dateable characters with a mixture of different types of relationships.

Should we really be out there going to other planets, pushing ourselves into these new spaces? That’s a major component of the story.

But with all that text, Exocolonist is not a visual novel, she adds. It’s a card battler, narrative-focused RPG, where your deck is built by the experiences your character has and then used in small, poker-like minigames that effectively function as the game’s combat. The word count deluge is spread out over hundreds of small moments that one can discover, or not, depending on the choices they make of how to spend their time over a decade. So while there are major story elements and themes everyone will run into, there are some you may never see on a single or even multiple runs. And, like my own first few hours with the game, those moments will vary wildly between light-hearted childhood fun and grim realities of adulthood.

“It’s a colony, so we deal with a lot of elements of – not specifically Earth colonialism, although it’s mentioned – but human expansion, environmentalism,” Northway says. “Should we really be out there going to other planets, pushing ourselves into these new spaces? That’s a major component of the story. We’re not shoving it down your throat so much, we really want the player to wander into it thinking, ‘Oh, it’s just one of those fun little farming simulator type things, where I have to work hard on this alien planet to industrialize it.’

“Then slowly over time around you, as you grow up on this planet, you come to realize that the things your parents have told you about humans’ place in the universe isn’t necessarily the only way. And that the player can come to their own conclusions. One of the major choices is whether to go along with what the colony is doing, which is very anti-environment, people-first, survival at all costs. Or do you want to try to find another way to either coexist with the planet or just limit human destruction of it entirely?”

But one absolutely critical feature of I Was a Teenage Exocolonist is that while my friend may have died an early death in my initial run, I’m not locked into that outcome forever, nor am I stuck with any of its sadder or less satisfying endings I might happen to get. Almost every bad event can be changed or prevented in some way, and once you finish your first run, your character will begin a Groundhog Day-like loop back to age 10 with all the knowledge of outcomes they picked up on the first go, allowing them to shortcut their way to better endings each time and effectively only solve each relationship or choice puzzle one time. There’s a lot of joy in Exocolonist alongside its darker moments. And Northway notes that there are even a couple of “very true, good endings” that will require multiple playthroughs and a lot of different choice paths working together to reach.

If it’s going to make a few people more comfortable, just put it in the game. It really doesn’t seem like a big deal.

All of what Northway describes has been working exceedingly well for me in my playthrough thus far, largely on the strength of Exocolonist’s writing. Northway and Ishihiro have lovingly created a planet with its own flora, fauna, history, archaeology, climate, and future that’s a treat to read about, especially as I can focus on just one or two components in each playthrough, learn all there is to know, then try a different path next time. The characters, similarly, are wonderfully multilayered folk who often surprise (for good and bad) over the course of the story. During our interview, Northway teased that a character I’d had a particularly difficult time befriending was one of her favorites, and had a wonderfully complex arc later on if I was ever able to break down his walls. I didn’t get around to it on my first run, but I’m already setting up to pursue him on the next.

If you’re reading all this and are put off a little due to the possibility of death, grief, and tragedy, there’s one last element to Exocolonist that I found absolutely brilliantly done that will assist you: its content warning system. The in-game menu has a list of warnings for all the different triggers you can possibly encounter in the game, which are nested in such a way as to help those looking to avoid specific triggers skip them entirely, but let those just looking for a heads up know what’s going on without spoilers. You can keep the list at surface level, or read up on some spoiler-light details for a specific trigger, or drill down all the way into the menu to learn how to avoid the trigger appearing in game at all by steering clear of specific scenarios.

I Was a Teenage Exocolonist Official Screenshots

Northway tells me the system was devised after watching some streamers playing early versions of the game cry or otherwise emotionally react on stream when they were hit with particularly difficult scenes. While she says she reached out and confirmed they were all okay, it made her realize that others might not be, especially if they (like me) were drawn into Exocolonist due to its cozy promotional aesthetics and weren’t expecting tragedy alongside the cuteness.

“The best part of this content warning is that it was trivial to put in,” she says. “It was very, very easy. Took about a day from conception to ‘it’s in the game and it’s done’. Everyone should just do this. It just kind of seems like a no-brainer. If it’s going to make a few people more comfortable, just put it in the game. It really doesn’t seem like a big deal. I understand that a lot of AAA games, people come in with the expectation that there’s going to be violence. There are going to be things that are upsetting or triggering. But certainly for indie games, it’s just really nice to tell people what to expect.”

As someone who doesn’t have any major triggers to avoid but does like a heads up for a few things, I remain grateful for the warnings as I give I Was a Teenage Exocolonist a second run. I think this time I’ll try to be a little more rebellious, spend a little more time with the loner kid whose shell I couldn’t crack the first time, build some better empathy skills, and see where all that takes me. I’m most excited to see what Vertumna looks like when it isn’t visited by tragedy almost immediately, now that I’m equipped to prevent the death that hit so hard in the first hour. Maybe I can keep that bright cotton candy planet innocent for just a tiny bit longer.

Rebekah Valentine is a news reporter for IGN. You can find her on Twitter @duckvalentine.