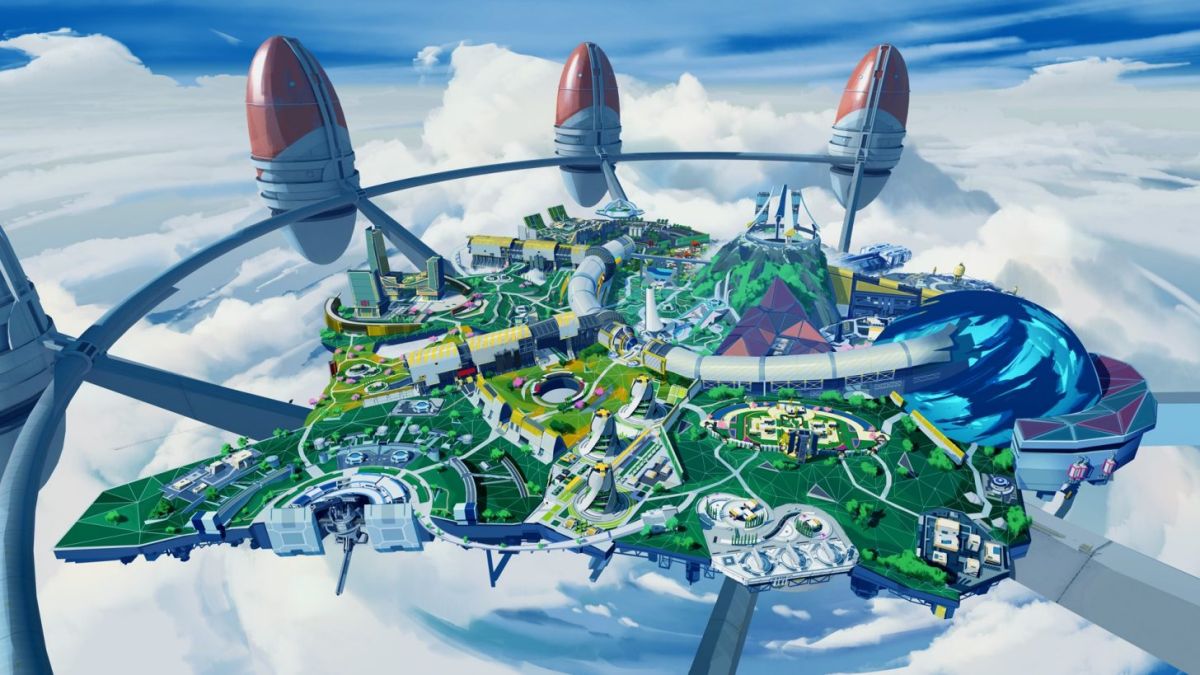 But they’re maps from an older era and, save exceptions like Overwatch and Halo Infinite, today’s shooters measure their arenas in kilometres, not square footage. Entire islands whose sheer scale demands repeated structures and empty hillsides—and while we might remember individual locations like Tilted Towers and Skulltown fondly, can any of these bloated maps hold their own against those titans of level design?

One can. And all you have to do is look to the skies.

I love Olympus. I adore Olympus so much I’m wearing the t-shirt (opens in new tab). Released in November 2020, Apex Legends’ third map was a stark departure from not only that game’s previous maps, but battle royale writ large.

Because of that aforementioned scale, BR maps tend to feel a little formless, requiring plenty of empty space with which to fit in 100 or more players. Be it PUBG’s Erangel or whatever the hell Fortnite’s ever-changing island is called, these battlefields feature a whole load of hiking across indistinct hillsides to get to the good bits.

Apex’s first two maps, King’s Canyon and World’s Edge, condensed this dead space down considerably—part of Apex’s intent to be a much faster BR with far less downtime spent scavenging and wandering. But they’re also messy and unnatural spaces, the illusion of being a believable landscape shattered by sharp mountains that form in perfect, 90-degree angles and sudden cliffs dropping into oblivion. They are mechanically competent, even visually stunning at times, but rarely come together as complete, believable places.

Olympus, meanwhile, is utterly singular, consistent in design and visual construction in a way few BR maps get to be. A utopian city in the clouds, the absurd artifice works perfectly to thematically ground the mechanical variety required of the genre. A classy hotel plaza gives way to the hydroponics farm necessary to keep it functioning; massive power plants concealed from vacation homes by a fake mountain facade.

Every one of which offers a different style of combat encounter and visual set piece, made consistent through sleek-yet-functional architectural design. Even the in-between spaces feel full of intent, hillsides formed of Portal 2-style panels that direct you through key areas, that ever-present artificial peak always on the horizon to orient yourself around. Each of these locations is also mechanically distinct; wide open spaces at the map’s edge funnelling into a central park, giving way to more claustrophobic urban environments around Turbine and the docks.

Olympus is gorgeous in a way that elevates the best parts of Apex’s aesthetic. Its deliberate artifice works perfectly within the Source Engine’s limitations, which struggles to paint natural landscapes even after Respawn’s heavy engine adjustments. It is the closest the game has ever come to looking like its own animated trailers, bright and bursting with colour.

In the downtime between fights, you can imagine what it would be like to live in this gravity-defying utopia. To pop open a laptop at a garden table in Estates, to ride one of those wee electric bikes across the Hammond field. You get a sense of the society that would have lived here, hiding the mechanics that keep their lofty home afloat just out of sight (and out of mind) behind fake peaks and under artificially-coloured grass.

It’s almost a shame that the sole purpose of this space is to facilitate bloody gunfights between Apex’s charming murderbuds. The best maps are exciting spaces to explore on their own merits, spaces that invoke the imagination and have you wondering over every nook and cranny. Olympus is all of those things—it also just happens to be a damn good 60-player bloodsport arena on top.

Given the live service nature of modern multiplayer games, maps are no longer one-and-done things. Even venerable classics like Dust2 have been given multiple facelifts (opens in new tab), but BR tends to be more dramatic in its changes.

If I were to ask straight-up what the most well-known BR map is, you’d probably say “the one from Fortnite”. But that island blows up and flips over several times a year—and who’s to say which version was the most beloved? Do folks think fondly back to Tomato Town, or is the current iteration’s war-stricken multiverse the best we’ve ever had?

Apex has had this problem too. King’s Canyon is filthy with new locations dropped over old ones, entire chunks of the map blown off in the name of balance. World’s Edge, meanwhile, committed the unforgivable sin of getting rid of the train (opens in new tab). Olympus’ changes feel more carefully considered, however—replacing locations that already felt filler with more characterful and mechanically vibrant spots. Who misses Crossroads when there’s now a terrifying vine-infested spaceship docked in its place?

Olympus’ updates feel less like change for change’s sake, and more like additive solutions to the map’s (very few) friction points. The largest addition added two new locations and an extended field between Bonsai and the Phase Runner, a change that served more to draw traffic out of the central Labs field and pull the lobby further south.

Live service demands fresh content, and map updates tend to come for the sake of adding something new and exciting to a known space. But while Olympus is firmly caught in this cycle, and has an entire team behind its development, its updates feel more like watching a hobbyist mapper refine and perfect their darling. Every change fixes some previous pain point, while keeping the map’s overall personality largely intact even 20 months later.

Now, Apex folks will probably tell me that World’s Edge is the more competitive map, that there’s a reason this year’s Apex Legends Global Series chose Storm Point over Olympus as its second map. And maybe that’s true—after all, it wouldn’t make for a great esports viewing if teams kept falling through holes into the clouds below.

But the best maps are rarely the ‘best’ maps. If you want a good round of TF2, you’re not playing on 2Fort, where matches will last upwards of an hour with zero points scored. But we remember these maps because of their intractably social stalemates. We remember Dust2 because it’s comfortable in its perfection. We remember Facing Worlds because of its absurdist orbital asteroid fortresses. They are, in their own ways, perfect distillations of what their respective games are.

Even if I do think Olympus is a great ranked map, actually, it’s not why I love it. I love Olympus because it’s a shining example of everything I love about Apex Legends—the sensibilities of older shooters brought into the modern battle royale. From its fantastical sci-fi thematics to its deliberate layout (including a massive map gimmick in the form of the city-spanning Phase Runner), it’s classic FPS level design through and through.

Respawn has already brought some of that ideology to its latest BR map, Storm Point, which despite returning to a more natural environment manages to feel more like a single location—lush forests and beaches sloping up towards a mountain peak. Storm Point’s transitional fields more deliberately funnel lobbies towards good fights, even if the map is probably a good 30% larger than it needs to be.

But even beyond its Apex map contemporaries, Olympus is proof that battle royale maps needn’t restrict themselves to endless tracts of plains, forests and desert landscapes. They can be every bit as deliberate, absurd and dripping in personality as any traditional FPS map. At a moment where it feels like BR has calcified around a scant few games and their handful of islands, Olympus screams that there is still so, so much more space to explore in the kinds of battlefield we could be dropping into.

Or perhaps I’m just being fanciful. After all, it does seem like I have my head firmly stuck in the clouds, doesn’t it?