Fans of belt-scrolling beat-em-ups have certainly been spoiled recently, with the sublime new Turtles adventure, and fun arcade throwback Final Vendetta barely leaving my screen. Attempting to join these two corkers is Itadaki Smash, an oddball 2.5D brawler from Main Loop Games, which allows you to choose from a selection of four strange yokai-inspired characters, and go into battle against a tasty menagerie of food-based foes.

There is no easy way to say this, but this is a bang-average game that suffers from a number of issues that stopped me from having a fun time with it. Firstly, despite the outlandish premise of battling against foodstuffs, the enemies in Itadaki Smash are poorly designed and at times it can be a struggle to identify what exactly it is you are hacking and slashing. The weird, unimaginative design stretches to the settings too – a lot of browns and reds and muddy colours. It moves along nicely, and there are no issues other than occasional slowdown on the Switch. But the environments are boring, bland and are accompanied by annoying, repetitive music that pales in comparison to some of the stellar soundtracks of recent games. 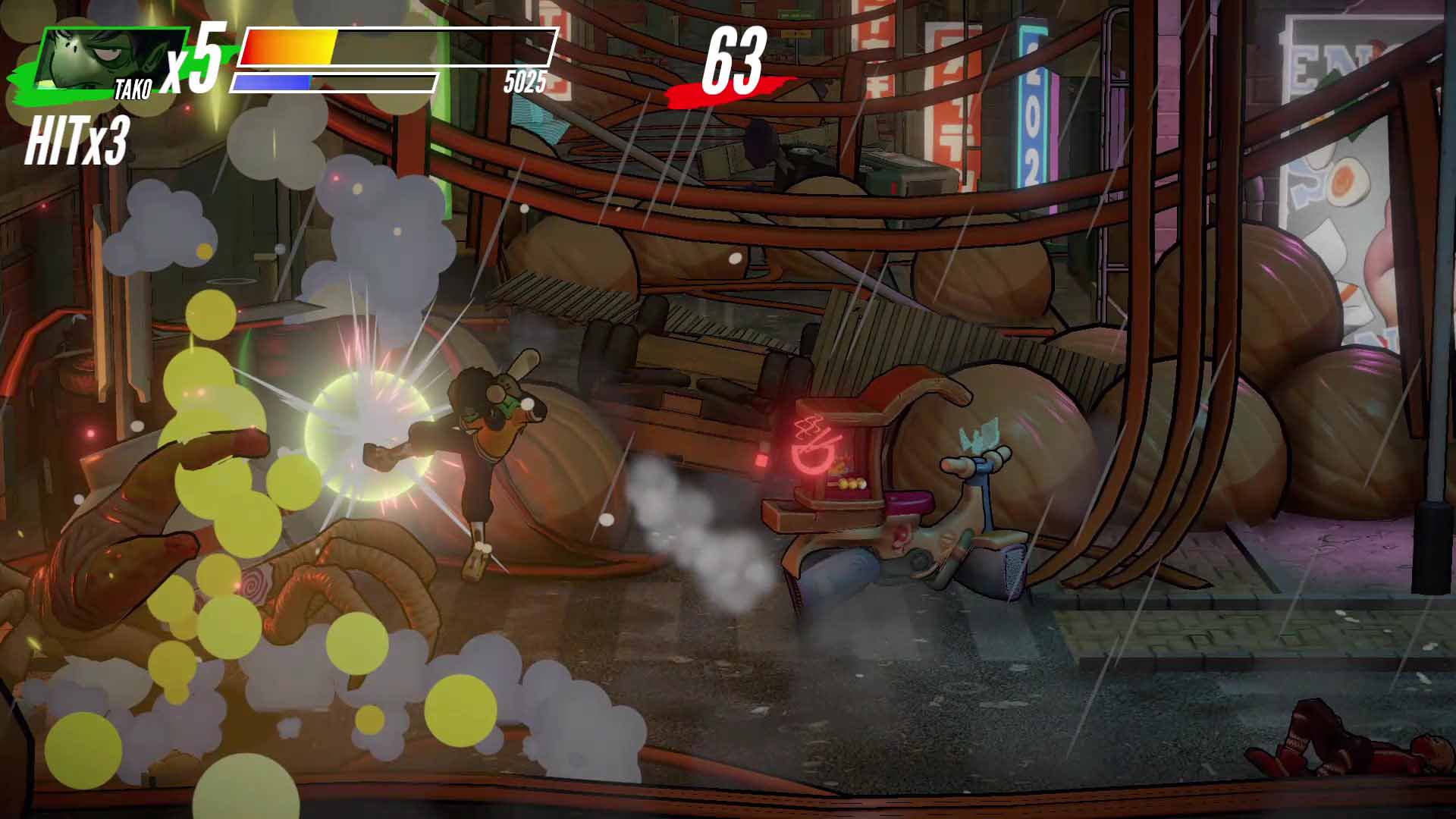 All the usual scrolling fighter attacks are present and correct. Like the heroes in a half shell, the Smash characters carry weapons and have varying statistics based upon reach, attack power and speed. There are dash attacks, a dedicated throw, special attacks and air juggles. Progress allows you to learn additional food-themed special attacks that are triggered by the left face buttons. The trouble is, the combat is just dull and uninspiring, and hampered by poor hit box implementation. This affects your ability to land hits from certain angles, and can lead to you misjudging projectile attacks thrown your way.

Precarious platform elements and environmental dangers are nothing new – we have seen stuff like this going right the way back to Double Dragon. In Itadaki Smash there are irritating sections where you leap between speeding vehicles, where I spotted lots of odd glitches, and tropes like an elevator section. Remember I said there is a dedicated throw? On sections where there are perilous drops, winning the day involves simply throwing your enemies over your shoulder with ease. It is mind numbing.

Occasionally you take a break from pummelling leeks and slices of tofu to encounter a boss. The first one is a literal giant enemy crab encased in a ramen bowl, which was unexpected and made me smile. Sadly, like the bosses that follow this noodle-laden crustacean, it is a case of button mashing with no real strategy needed. There are plenty of stages, but they are all confined to four areas, none of which are much fun to look at and walk around in. 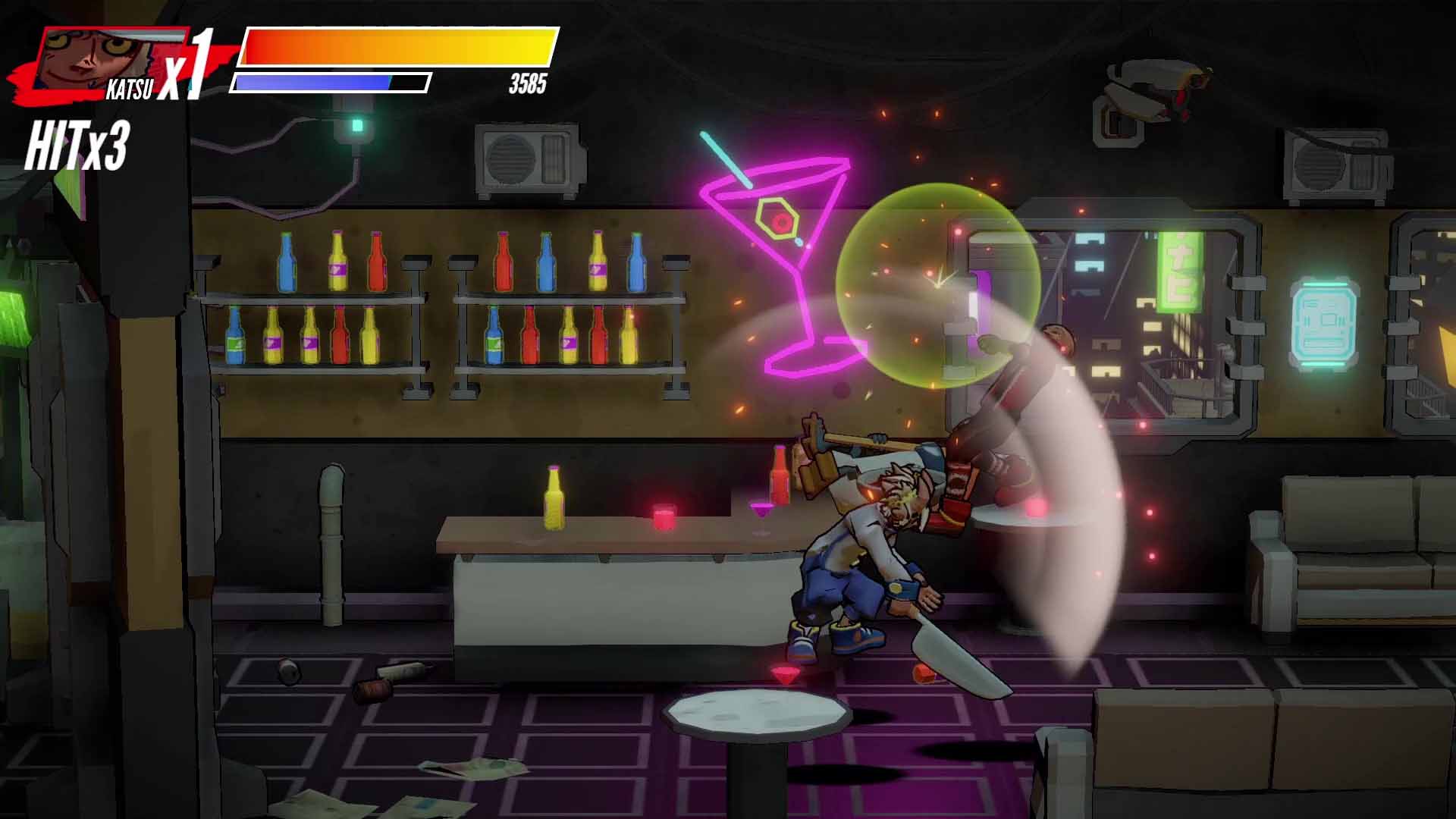 One thing the game does have is a decent sense of humour, with a nice degree of fourth-wall breaking and some fun touches. There is a plethora of references to other games from the past, in particular a stage where you walk past a berry-laden series of arcade cabinets. There’s even a pastiche of Capcom’s vehicular bonus stage, right down to an “Oh, my car” speech bubble.

These charming throwbacks are not enough to save this one, however. The studio clearly have a lot of love for the genre, but there is no escaping the fact that this one is average and couldn’t have really come at a worse time given the presence of other releases impressing beat ‘em up fans old and new. It lacks charm, the combat is technically weak and it becomes deathly dull very quickly. A true missed opportunity.

Liked it? Take a second to support GodisaGeek.com on Patreon!