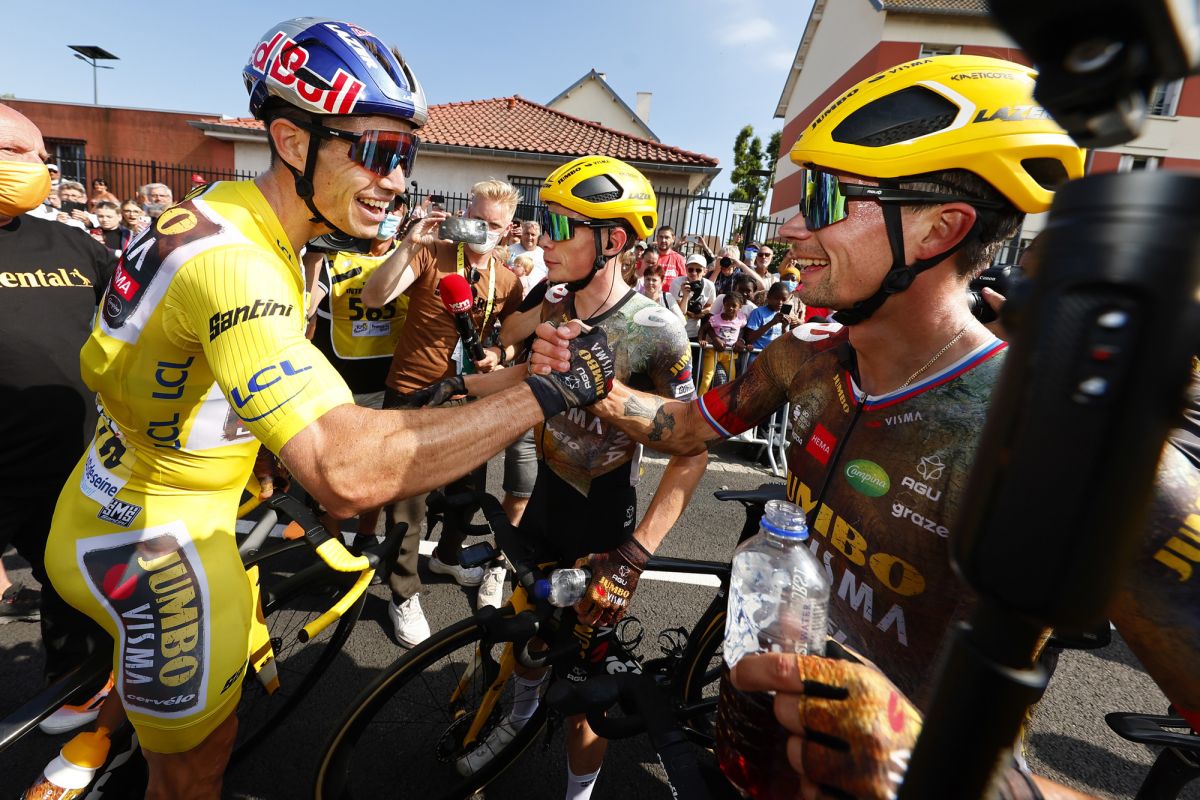 Team Jumbo-Visma confirmed on Tuesday that it will avoid using the tubular Shimano wheels that collapsed, in separate incidents, beneath Christophe Laporte and Wout van Aert at Paris-Roubaix this spring.

Instead, the team will switch to the newer Shimano Dura-Ace wheels, while also switching from tubular to tubeless.

With stage 5 of this year’s Tour de France traversing 17km of Roubaix cobbles, equipment choice could be a key factor in a team’s success. On a day where the Tour won’t be won but could very certainly be lost, avoiding significant time losses will be the primary aim for the GC favourites, and among those are Primož Roglič and Jonas Vingegaard.

Monday was described by some as a ‘free rest day’ in the north of France following the long transfer from Denmark, so the team took the opportunity to have one final recce of the cobbles and dial in their equipment.

“We chose to return to the cobbles, when our riders have already recognised this stage twice each, this winter and in March, because we wanted to do a fairly intense session and above all test the bikes once again,” Jumbo-Visma’s performance director Mathieu Heijboer told L’Equipe.

Heijboer also revealed that the team will switch from the Cervélo S5 aero bikes to the more compliant Cervélo Caledonia, an all-road bike designed to handle light gravel, making it suited to the rougher cobbled terrain.

“They will all use the special Paris-Roubaix bikes, which are much less rigid than the ones they usually use. The frame really absorbs the vibrations of the cobbles and, even if it will only last about twenty kilometres, these are the most important kilometres of the stage. For a bunch sprint, sure, they’re not the best bikes but guys will tire a lot less with them.”

The primary stated benefit of tubular wheels and tyres is the ability to continue riding after a puncture. Of course, the rolling resistance increases and the cornering traction is reduced, but given the tyre is glued to the rim, it won’t remove itself.

It’s therefore deemed safe to ride on until the team car can get close enough to provide a quick wheel change, rather than forcing the rider to stand stranded at the roadside and wait.

The two incidents at Paris-Roubaix occurred after Laporte and Van Aert attempted to take advantage of this fact and continue riding over the cobbled terrain. However, given punctured tyres don’t offer any cushioning, each and every cobble directly impacted the carbon fibre rim. Eventually, the rims cracked, and the wheels folded.

Likely due to stock shortages, Jumbo-Visma were using Shimano’s older R9100 Dura-Ace wheels, despite Shimano having previously replaced them with the newer R9200 series Dura-Ace model. The team now has access to the newer wheels, and so in a bid to avoid the same failure happening to their GC leaders, they will make the change.

“This time, unlike Paris-Roubaix (where those of Van Aert and Laporte broke after a puncture), we will use tubeless instead of tubular and new rims, 50 [millimetres deep], stronger and lower [tyre pressures],” confirmed Heijboer. “In Paris-Roubaix, we were still equipped with last year’s model.”

However, the team also has access to the new Dura-Ace wheels in a tubular guise, so the switch to tubeless is one of tactics rather than logistics.

Tubeless tyre technology, widely adopted in mountain biking, is comparatively new to the pro peloton. Its primary benefit is the ability to self-seal punctures and effectively allow a rider to continue as if nothing happened, albeit with a slightly lower tyre pressure than before. When it works, it’s undoubtedly the best of the currently available solutions for pro riders, but it doesn’t always work.

A totally punctured tubeless tyre is more likely to come off the rim and force a total stop. Recent advancements in the tech have addressed this somewhat and led to tyres being better at staying attached without any air, but it’s still not as secure as a glued-on tubular. Were it ridden on cobbles, the same risks of catastrophic failure would also befall a punctured tubeless wheel.

However, it would appear that following the incidents at Paris-Roubaix, Jumbo-Visma believe in tubeless enough to run it on such an important day. Or at least, they believe the benefit of self-sealing tyres outweigh the increased risk of the tyre coming off the rim and forcing a complete stop. Given the tubular wheels failed beneath them and also forced the complete stop, you can begin to understand why.

“Our leaders, Primož Roglič and Jonas Vingegaard, have been training with these bikes since May,” continued Heijboer. “They participated in the GP Denain with it (which included twelve cobbled sections of 20 kilometres in all) and they did several sessions with it during our training courses, on roads that were not always tarred. All of this, of course, is an accumulation of small details, but it’s the little things that give riders confidence.”

Heijboer also went on to confirm that Van Aert’s primary aim for the stage – which suits him as a classics specialist – will be in a domestique role.

“Obviously, we have prepared a lot for this stage and even if it seems cut out for a guy like Wout van Aert (second in the last Paris-Roubaix), he will be at the service of Primož and Jonas tomorrow to help them finish in the best possible position. Even if he is in yellow, we must not deviate from our goal: the green jersey for him and the yellow in Paris.”