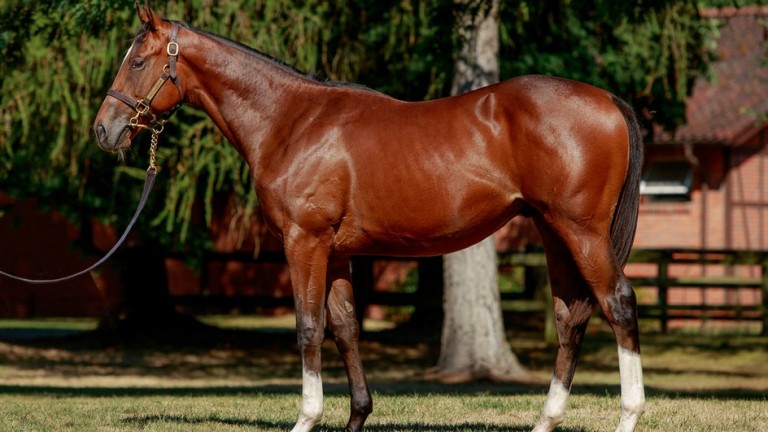 The combination of Kingman and Gestut Fahrhof reigned over Baden-Baden this week, on the track and in the sales ring that lies across the leafy road from the course.

While the yearlings were undergoing intense scrutiny from potential purchasers on Wednesday, Fahrhof’s homebred Kingman filly Habana was imperious in victory within earshot of the breeders’ barn, her elegant stroll to success coming in the Group 3 Renate und Albrecht Woeste Zukunfts-Rennen.

Trained by Andreas Wohler, she is now set to carry the farm’s iconic yellow and black silks in the Group 1 Prix Marcel Boussac at Longchamp next month.

In whose colours the Fahrhof-bred Kingman colt who provoked an international bidding battle between agents Jason Litt and Michael Donohoe at the BBAG Yearling Sale on Friday will run remains a mystery despite Solis/Litt striking the decisive blow at €450,000.

The opposing parties were stationed at either side of the raised platform from where the auctioneers and yearlings command the attention of the airy ring. Litt’s bidding was swift and without hesitation, raising the stakes almost immediately after each bid from Donohoe, who was more deliberate in his tactics.

When the hammer came down, a smattering of applause greeted the sale and Litt pronounced himself very pleased to have purchased the colt, bred on the same Kingman-Dansili cross as Tempus and Marbling, both Group 3 winners this summer.

“This is my first trip to Baden Baden and I am really happy right now, we got the one we wanted. We came here to buy what we thought was the best horse in the sale and we think he is so I am pretty happy,” Litt smiled.

The April-foaled colt is the second foal out of the triple Listed winner Sarandia, who was also second in the Group 1 Preis der Diana to Serienholde in 2016 for her owner-breeder Gestut Fahrhof. Sarandia is a half-sister to the Group 3 Bavarian Classic winner Saphir plus the Listed winner and Group 3 Prix des Chenes second Saint Pellerin.

His second dam Salontasche is a winning half-sister to Salonblue, whose victories included a Listed success at Baden Baden. The Bluebird mare is the second dam of this season’s Deutsches Derby and Grosser Dallmayr-Preis winner Sammarco.

Kingman’s offspring have adapted beautifully to racing in North America with Grade 1 winner Domestic Spending and last weekend’s Grade 2 Ballston Spa Stakes winner Technical Analysis among his stars Stateside. However it is quite possible this colt will remain on this side of the Atlantic Ocean, following indications from his American purchaser.

“He is likely to stay in Europe to be trained but by whom is yet to be determined,” Litt said. “You come here in the hope that you can get them but it doesn’t mean you will and if you plan too much, you usually never get them.”

In response to questions about what made Litt so determined to secure the only Kingman yearling offered at Baden Baden on Friday, he replied: “He is beautiful with a great attitude. He has great balance and is athletic. He ticked all the boxes, which everyone hates to hear but it’s true.”

The decision of Andreas Jacobs and the team at Gestut Fahrhof to offer their yearlings for sale only at Baden Baden this year was certainly the correct one as the farm took its place proudly at the top of the consignors’ charts.

In addition to the Kingman colt, Fahrhof also sold a son of Night Of Thunder who began a run of six-figure sales that reinvigorated buyers who had wilted a little in the afternoon heat. 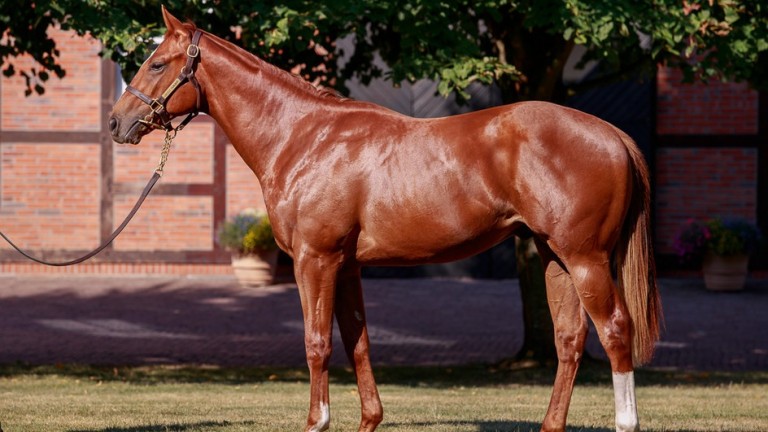 In the away dugout was the Godolphin team as they went toe-to-toe with the home side, represented by Jurgen Sartori, owner of Group 3 Prix de Psyche winner Penja and it was the home team who emerged victorious with trainer Andreas Suborics signing for the Night Of Thunder colt at €325,000.

The chestnut, who had more than a hint of his sire about him, is the first foal of Mulheim’s Listed Diana Trial winner Realeza, by Maxios, and the family has shown its liking for an infusion of Dubawi blood.

Realeza is a three-parts sister to Godolphin’s Listed Ballymacoll Stud Stakes winner Rumh (by Monsun) and her Group 1-winning offspring – Wild Illusion and Yibir – are both by Night Of Thunder’s sire Dubawi.

Gestut Fahrhof finished on Friday night as leading consignor, with three of the day’s most expensive yearlings and total receipts of €1,420,000 from the sale of 12 of the 16 horses they offered. That gave an average of €118,333 which was also the best recorded by any consignor.

Sea The Stars’ burgeoning reputation as a broodmare sire has developed even further this season with the emergence of Group 1 Grand Prix de Paris winner Onesto, and the Group 1-placed half-siblings My Astra and My Prospero.

It was a daughter of the world champion who became the first yearling to smash through the €200,000 ceiling when making the early running at BBAG.

Offered by Haras de l’Hotellerie, the filly is bred on the same cross that produced Group 1 Deutsches Derby winner and sire Sea The Moon as she is out of Imagery, a daughter of Monsun who was a Listed winner in Hannover at three.

At stud Imagery is the dam of Listed Diana Trial winner Ismene by Tertullian, who is from the family of Sea The Stars, and Instigator, a son of Nayef who won the Listed Derby Trial at Bremen. Imagery is also the dam of last year’s Deutsches Derby third Imi, another by Tertullian.

Ronald Rauscher struck the winning bid at €250,000 on behalf of one of Germany’s most successful owner-breeders.

“She is for my main partner and client Dr Christoph Berglar. He splits his horses in training between Andreas Wohler and Waldemar Hickst but I don’t know who is going to be the lucky one,” Rauscher commented.

Imagery is a full-sister to the Group 3 Bavarian Classic winner Imonso and a half-sister to Group 3 Badener Meile winner and Group 1 Criterium International second Idealist and the Listed winner Idolino from the family of Group 1 Bayerisches Zuchtrennen winner Intendant.

The breeder of international luminaries such as Protectionist and Novellist was understandably keen to add such a beautiful filly with an excellent pedigree to his collection of exquisitely bred broodmares.

“She is a very nice filly and he loves Sea The Stars and that great Schlenderhan family. She is out of a Monsun mare so it is very Germanic. I think she is very nice, I liked her a lot,” Rauscher added.

A half-brother to the Grade 2 Sheepshead Bay Stakes winner and Preis der Diana third Virginia Joy, he is out of the German St Leger winner Virginia Sun by the recently retired Doyen.

Frankel to the fore for Rauscher

Rauscher was one of the busiest people in Iffezheim this week, performing the parts of buyer and consignor with aplomb and it was in that latter role he sold the most expensive of the Frankel yearlings offered in the sale.

The filly is the the third foal out of Vagabonde, whose own track career was rather ordinary but her pedigree is anything but mundane. She is an Acclamation half-sister to Kalahara, a daughter of Frankel who won the Group 3 Prix d’Arenberg and to Group 3 Prix Eclipse winner Sasparella by Shamardal.

Second dam Desertiste is a Green Desert full-sister to the Group 3 winner Only Answer and a half-sister to Galileo’s Arlington Million and Woodbine Mile-winning son Mondialiste and to the Group 2 Prix de Sandringham winner and multiple Group 1-placed mare Impressionante who is the dam of Intello.

Her third dam is the Prix de la Foret and Prix Maurice de Gheest winner Occupandiste and Elnadim, Mehthaaf and Ribchester all under the fourth dam Elle Seule.

Michael Donohoe, who had come out on the wrong side of a few bidding battles, most notably for the sale-topping Kingman colt, was pleased he was on the right side of this one, purchasing the filly for €250,000 on behalf of Zhang Yuesheng’s Yulong Investments.

The BBA Ireland agent pointed to the influence of her broodmare sire on the filly’s physique. 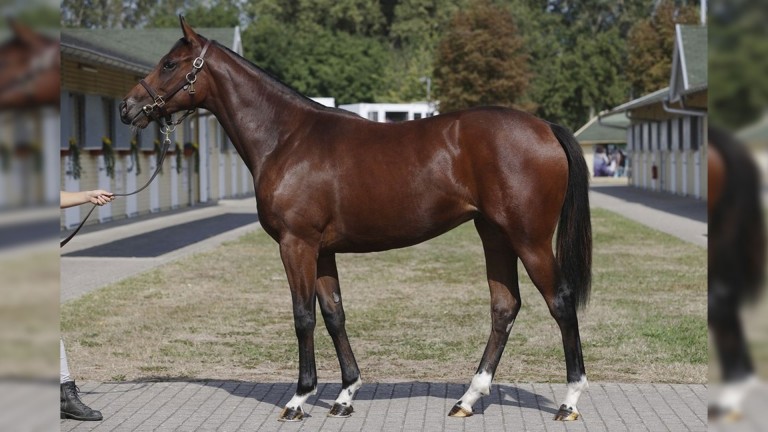 Ronald Rauscher’s Frankel filly, a three-parts sister to Group 3 winner Kalahara, is knocked down to Michael Donohoe and Yulong for €250,000

“There is a nice bit of Acclamation about her and she looks an earlier type than your typical Frankel. I really like her pedigree and we’re pleased to get her. We lost out on a few others but considering the prices they are making, I think she could represent a bit of value,” Donohoe commented.

Frankel formed part of the formidable Fahrhof consignment and a colt, who is closely related to Group 1 Premio Roma winner Potemkin by New Approach, was another of the draft to sell for in excess of €200,000.

As well as Potemkin, the colt’s dam Praia has produced the Listed winner Paraisa by Red Ransom and Patuca, a daughter of Teofilo, who herself is the dam of last season’s Listed Foundation Stakes winner Victory Chime by Campanologist.

Praia was herself a classy racemare, earning two Listed placings and is a Big Shuffle half-sister to Group 1 Criterium de Saint-Cloud winner and Preis der Diana and Prix Vermeille third Paita, and to Puntilla, who won the Preis der Diana.

Her Frankel colt will carry the colours of leading owner Eckhard Sauren, who bought him for €210,000.

“He was one of my favourite horses in the catalogue and I really liked him but the price was very close to my limit,” Sauren informed reporters. “I won’t make decisions about trainers for the yearlings until October.”

The Frankel colt was the most expensive of the eight yearlings Sauren signed for at the sale, a list that also included the Areion half-brother to Sammarco. Breeder Helmut von Finck’s Gestut Park Wiedingen sold the half-brother to the Camelot three-year-old who tackles Torquator Tasso at Baden Baden on Sunday for €80,000.

An increase in the number of yearlings sold for at least €200,000 showed the strength of demand for the best yearlings at BBAG with seven youngsters achieving that mark, three more than in the previous year.

The only filly in the sale from the penultimate crop of Le Havre, who died earlier this year, boasted one of the most instantly recognisable of German families – that of Samum, Schiaparelli, Salve Regina and Sea The Moon – and she joined that elite group of seven when knocked down to Ghislain Bozo of Meridian International for €205,000.

Their dam Salve Haya is a winning Peintre Celebre sister to the Grade 2 Ballston Spa Handicap winner Salve Germania and they are out of the Preis der Diana winner Salve Regina, who was second in the Deutsches Derby and the Grosser Preis von Baden.

Klaus Eulenberger and his team will have plenty to smile about when they look back on the 2022 BBAG Yearling Sale, not least record turnover of €8,361,500, a leap of 24 per cent on the 2021 figure and higher than that posted in 2019, which was the previous highpoint.

Neither the median nor the average could match that year’s figures, but they demonstrated impressive growth on last year with the average up 24 per cent to €53,258 while the median outstripped the average, which illustrated the strength of trade at Baden Baden on Friday night.