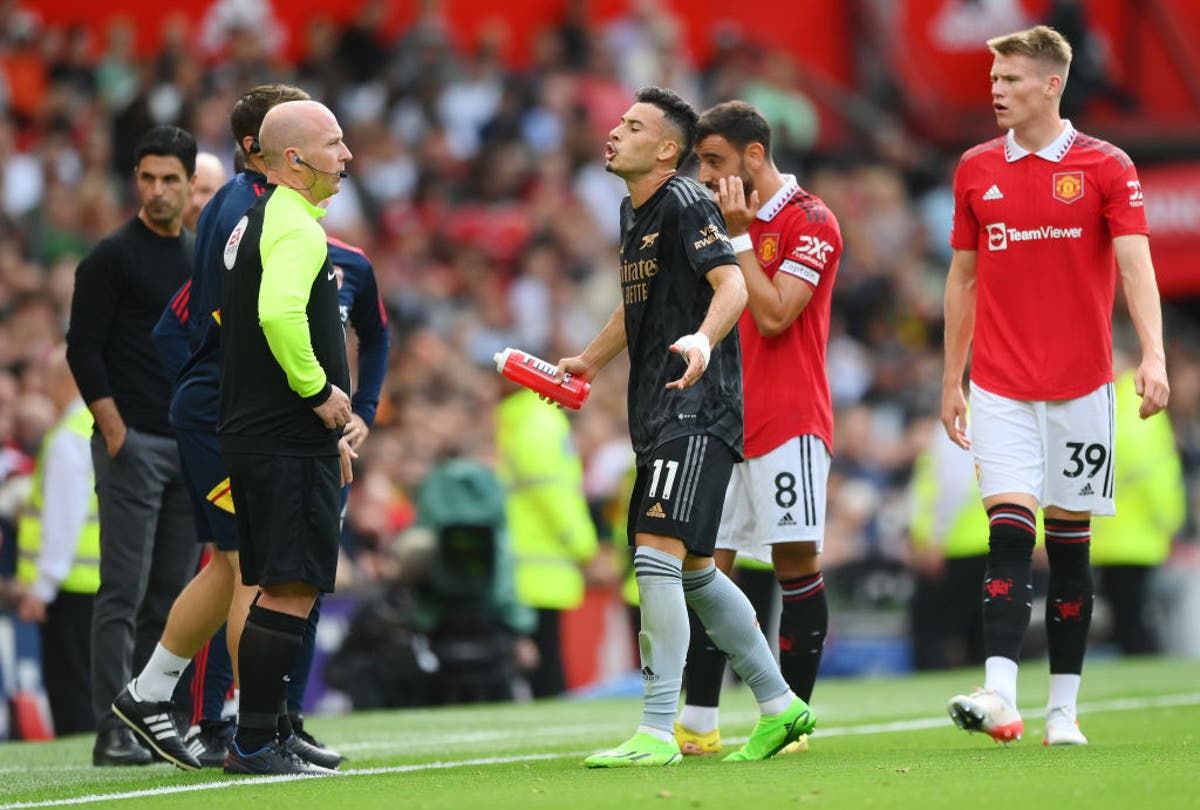 Follow live updates as Manchester United host Arsenal in the biggest fixture of the Premier League weekend. The Gunners head to Old Trafford at the top of the table and with five wins from their opening five games under Mikel Arteta. They will face their biggest test of the season so far, however, as they take on Erik ten Hag’s United – who appear to have turned a corner with three consecutive wins.

Thursday’s win over Leicester came as United confirmed the €100m signing of Brazil forward Antony, who will make his full debut at Old Trafford today. Arsenal, meanwhile, were frustrated in their pursuit of Douglas Luiz and suddenly look a little light in midfield – but Arteta has been boosted by both Oleksandr Zinchenko and Martin Odegaard’s availability. If Arsenal were to win it would be only their second at Old Trafford since 2006 and would increase the excitement around the Emirates of a potential title challenge. Follow live updates from Manchester United vs Arsenal, below:

28 mins: Lokonga goes in hard on Fernandes. Not the smartest of challenges as he scrapes down the calf of Fernandes.

Almost certainly a yellow card but it wasn’t spotted by the referee. Fernandes fuming. When isn’t he?

The tempo just seeps out of the game for a few moments.

26 mins: Penalty appeal for Arsenal. Saka cuts inside and tries to nick the ball ahead of Martinez. The Arsenal man goes down under pressure from the Argentine centre-back and there was not enough contact to warrant a spot kick.

YELLOW CARD. United break and Martinelli is chopped down by Saliba. He becomes the first player to go into Paul Tierney’s book.

23 mins: First opportunity for Manchester United signing Antony. He receives it on the right, cuts inside on his left foot and bends a shot high and wide.

First real glimpse of goal United have had since Arsenal’s disallowed strike. The visitors bossing proceedings now after a shaky start. United need to find a foothold once more.

20 mins: Sublime from Saka. The Arsenal man receives it wide on the right. He stands up Malacia and then darts down the line, beating him for pace and pulling the ball back. Arsenal clear it away but that is a danger sign for the Manchester United left-back.

Arsenal then win a corner. It finds Jesus at the back post but he skews his attempt well wide.

18 mins: Arsenal have responded well to that decision going against them. They are enjoying their first real period of possession in the game.

Worth saying that Martinelli’s finish was so wonderful. He was played through by Saka and just delicately lifted it over De Gea.

Made it look so easy. Shame it won’t count.

15 mins: The goal is disallowed. Paul Tierney had a long, long look at that and eventually decided to disallow it.

Can see it from both sides, but ultimately Odegaard did nudge Eriksen and catch him on the leg too.

It’s as you were. United given a let off.

Odegaard nicks the ball away from Eriksen, pushing him over in the process. No foul is given and Saka slides it into Martinelli who finishes deliciously!

But wait, Paul Tierney is going to the monitor to have a look at the possible foul on Eriksen.

We know what that usually means…

12 mins: The hosts have had 85 per cent of the ball in the opening 12 minutes of this match – a scarcely believable stat compared to a few weeks ago.

Sancho cuts in from the left and tries his luck at the near post but Ramsdale gets down smartly to parry it away.

All United so far. Oh but hang on…

10 mins: Jesus will carry on. For a moment there he looked knocked out, but alas he was fine after receiving a brief period of treatment.

Manchester United have the ball back and keep it for a sustained period of time which the home crowd are enjoying.

Positive start from the hosts. No major chances just yet.