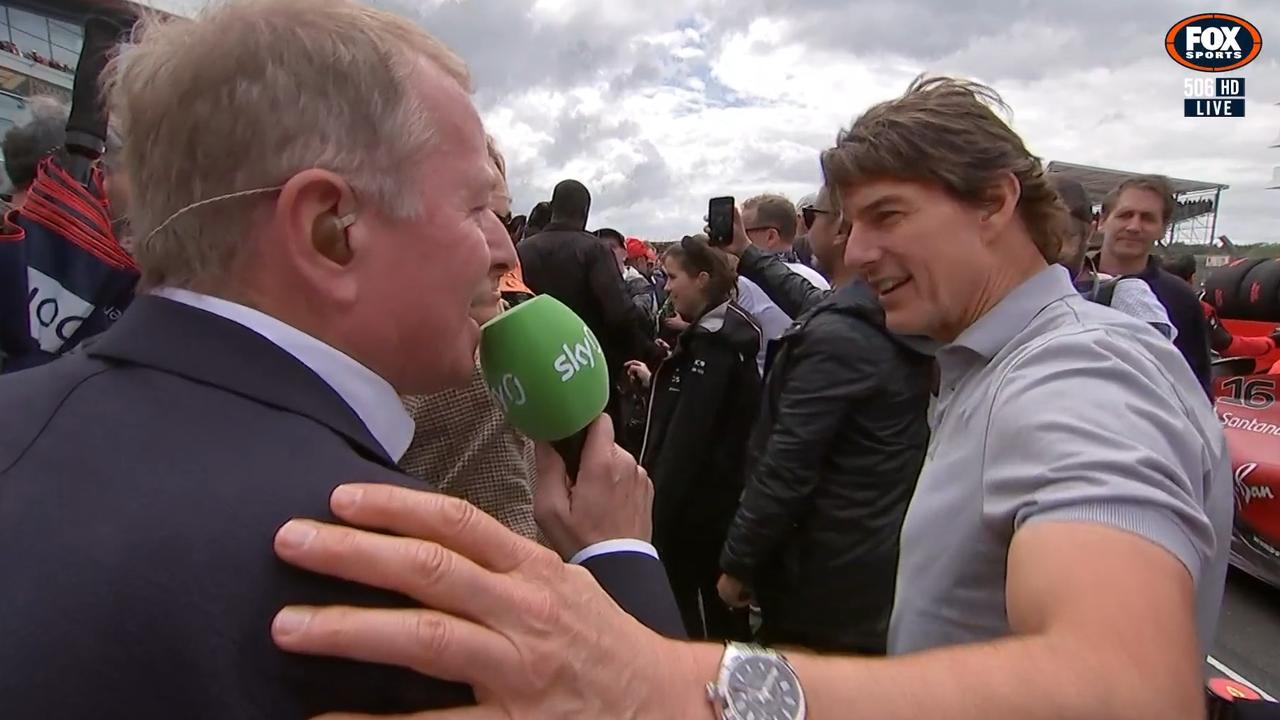 No one is safe when Martin Brundle is on the F1 grid with a microphone in his hand — not even Tom Cruise.

The Formula 1 icon did it again in Monday morning’s action-packed British Grand Prix where his traditional track walk delivered the wild, wacky and cringe-worthy TV the world has come to expect.

Brundle also made worldwide headlines at the Miami Grand Prix in May when he was given a cold shoulder by Serena Williams during his pre-race track walk.

Watch Every Practice, Qualifying & Race of the 2022 FIA Formula One World Championship™ Live on Kayo. New to Kayo? Start your free trial now >

Brundle spoke to a string of celebrities as they stood on the F1 grid at the Silverstone track in the minutes leading up to the start of the race — and he saved his best moment for Cruise.

Cruise politely made a hasty getaway after Brundle barged in and put the microphone in the Hollywood star’s face — as delicately as the chaotic situation would allow.

Cruise’s softly spoken responses couldn’t be picked up by the microphone at times, but Brundle soldiered on.

Here’s how it went down.

Martin Brundle: How are you doing?

Tom Cruise: Very well. How are you?

MB: Welcome to the grid again. Congratulations on the movie that’s just gone down a storm. Are you cheering for anybody particular today?

TC: Lewis (Hamilton) always. I love to watch him racing and he’s a good friend of mine. Hopefully he has a great day.

Cruise gave Brundle a reassuring pat on the shoulder before turning away before the Sky Sports commentator could get another question in.

Brundle walked away telling the live TV audience: “Got pushed around a bit. But he was lovely. Would have liked to have talked to him for a bit longer.”

Cruise was in the VIP area of the track as he celebrated his 60th birthday.

In classic Brundle fashion he continued to speak to UK Culture Secretary Nadine Dorries despite clearly having no idea who the politician is.

He also walked straight past MMA star Paddy Pimblett without recognising him.

The race itself was every bit as dramatic with rookie driver Zhou Guanyu surviving one of the more terrifying crashes in recent memory.

The crash occurred on the very first lap of the race when Zhou was accidentally clipped by Mercedes’ George Russell on the opening corner at Silverstone.

Zhou’s car flipped upside down, sliding off the track and across the gravel at full speed before landing sideways on the catch fencing.

The race was red flagged and after a long delay, Ferrari’s Carlos Sainz eventually claimed his maiden victory in his 150th Grand Prix ahead of Sergio Perez and Lewis Hamilton.

Zhou posted a selfie on Twitter after the race to reassure fans he was OK, reiterating the “halo saved me today”.