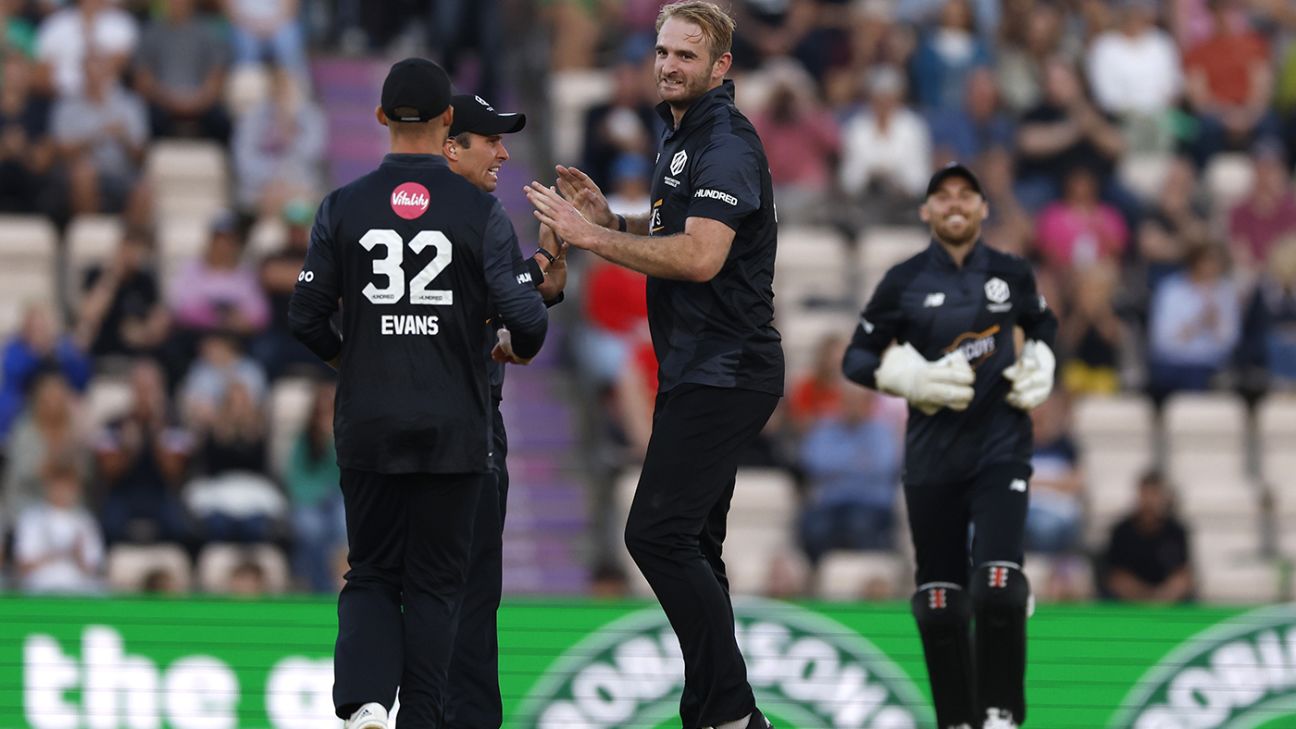 He bats, bowls and fields. He’s big, strong and powerful. He’s taken a wicket every nine-and-a-half balls, and hit a six every eight. He even has a two-syllable nickname, but forget “Dre Russ”: the Hundred in 2022 has been all about “Tall Paul”.

It was the signing of the season – one that you almost certainly missed. Manchester Originals in 2022 were meant to be the team of Jos Buttler, Andre Russell and Wanindu Hasaranga, but when Jamie Overton went down injured in a County Championship game on the eve of the season, they scoured the list of possible replacements and landed on Paul Walter.

Walter’s defining quality is the fact he is tall: two metres tall, 6ft 7in tall, tall enough that it has never taken any processing time to work out why everyone who knows him calls him Tall Paul. When he bats, he looks like an overly-competitive dad wielding a size-three on the beach, or the only member of his Under-14s team who has already been through his growth spurt.

Originals picked him up as a middle-order batter on the back of a strong T20 season for Essex comprising 404 runs, 144 of them in sixes. They might even have hoped to squeeze a few sets out of him: he had 29 wickets to his name in T20 cricket with his medium pace, though had only bowled one over in this year’s Blast.

Late on Friday night, he will head up the M3 to London as the leading wicket-taker for one of the Hundred’s two finalists, his dozen wickets unrivalled across the Originals squad. Like a left-arm version of Jason Holder, he has bowled deceptively slowly, varying his pace from a high release point; in a four-week short-form competition, there is a huge value in novelty.

Walter’s first ball in the Hundred was a 67mph, around-the-wicket, slower-ball bouncer that looped up apologetically off the Lord’s pitch. On a Saturday, club cricketers across the country would call it a filthy long-hop; Glenn Maxwell, playing for London Spirit, tried to swipe it over the Tavern Stand but was through his shot early.

Somehow, he finished that night with 2 for 18 from his 20 balls. “I’ve not been injured,” he told Sky, when asked why he’d hardly bowled all season. “I’m just trying to regain a bit of form and get some confidence back.” It went largely unnoticed: Originals slid to the second of three consecutive defeats, and all the Hundred’s social channels wanted you to worry about was the fact Harry Kane had tossed the coin.

Three-and-a-half weeks later, against the same opposition, it was Walter who restricted Spirit to 150 for 7 in Originals’ five-wicket win in the eliminator at the Ageas Bowl. The left-arm-around angle was back in action: he cranked it up to 79mph to knock Zak Crawley’s middle stump out of the ground with a reluctant thud, had Ben McDermott caught in the deep with a tantalisingly slow short ball, then had Eoin Morgan caught when he charged down looking to slap a half-volley over mid-off.,

On Wednesday night, in Originals’ effective quarter-final, he had his most hectic evening of all: he took a blinder catch at deep backward square leg, then came on to bowl feeling dazed after jarring his right shoulder while diving at long-on; he twice dislocated his shoulder during his only set of the night, which featured a 56mph offcutter, then shook himself off, hit the crucial six in the chase and scrambled through for the winning single.

After their first three defeats, Walter nominated himself as Originals’ social secretary. It was a moment that Laurie Evans, their stand-in captain, pinpointed as the turning point in their season: he bought a few beers, lightened the mood in a tense dressing room, and has personified a six-game winning streak since.

“He’s a socialite,” Tom Lammonby said. “He’s one of those blokes that’s so good for a team: he’s performing on the pitch but also helping us gel off it.” Evans was unequivocal: “He’s been the life and soul of this group.”

Walter was not the hero – Cazoo Match or otherwise – that the ECB had expected to emerge from the Hundred: a 28-year-old allrounder from Basildon, picked up as a late-bloomer by Essex after catching their eye by hitting six sixes in an over for Hornchurch in league cricket. But as the world’s best have left the competition in a constant stream towards Heathrow’s departure lounge, he has become this season’s most unlikely superstar.

The Hundred’s incessant culture war has raged on through its second season: on one side, it is “action-packed, unmissable” best vs best action that “will put you on the edge of your seat”; on the other, it is Everything Wrong With Modern Cricket™, mercenaries dressed as crisp packets providing something between light entertainment, teleshopping and background noise.

Somewhere through this online battlefield, Walter has emerged and stripped the game back to its most basic principles. He has met a new group of team-mates, eased into their company over a few drinks, swung hard and bowled to a plan. He is the Hundred’s everyman, thrust onto the big stage and making himself feel at home.

On Saturday night, he will play in a Lord’s final on free-to-air TV. And if he can smoke a few sixes into the stands with those long, long levers, or land that slow, slow offcutter just right, it will be Tall Paul dancing around north London with a trophy for company.

Matt Roller is an assistant editor at ESPNcricinfo. @mroller98