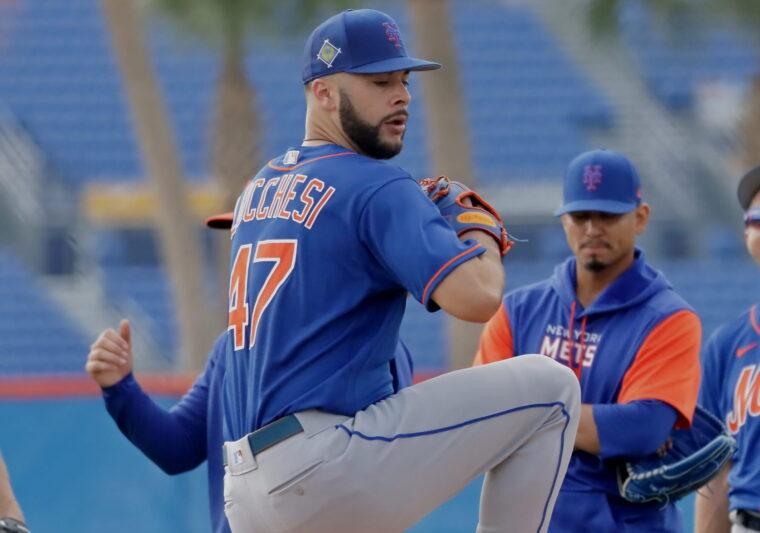 Photo by Ed Delany of MMO

For the second straight rehab outing, Joey Lucchesi pitched out of the bullpen, and he was perfect this time out. Lucchesi needed just 13 pitches to make it through a season-high two innings of work on Saturday evening, as he inches closer to his return to the major league team.

The bottom of Syracuse’s lineup did all the heavy lifting in Saturday’s game. The last three hitters in the lineup had four of the team’s six hits and drove in four of their five runs. Meyer got the Mets on the board with a two-run homer in the third inning. That was sixth home run of the season, a total which doubles his previous career high of three. Vientos has been in a mini-slump over the last week, as he is just 1-for-22 in his last six games.

Vargas struggled mightily in the first Triple-A start of his career. His seven runs allowed were second-most that he has allowed in a start this season. Nogosek continues to be excellent with Syracuse and has held opponents to just a .495 OPS against. After walking 17 batters in just 8 2/3 innings during August, Otanez walking nobody and needing just nine pitches to get through a perfect inning is certainly a welcome sight.

The Rumble Ponies only pushed across one run via seven hits on Saturday night. Jordan has struggled since his promotion to Binghamton but had his first multi-hit game in Double-A and scored the Rumble Ponies’ only run in this game. Mauricio is 0-for-12 with one walk and six strikeouts to start his September. Young extended his hit streak to six games with his fifth-inning double.

Bryant was solid, if unspectacular, on Saturday. He needed just 84 pitches to make it through seven innings and kept the Rumble Ponies in the game despite their offensive struggles. Hartwig was excellent as usual in his multi-inning appearance, although he did have some uncharacteristic control issues. After walking just three batters over 10 innings during the entirety of August, he matched those walk numbers in just two innings during his first September appearance. Still, he has allowed just three earned runs over 34 1/3 innings pitched since his promotion to Brooklyn in May.

Despite recording 11 hits in this game, the Cyclones went just 2-for-10 with runners in scoring position and were able to score just two runs. Newton brought home the first run on a ground-ball single in the second inning, while Schwartz grounded up the middle for an RBI single to bring home the second run in the fifth. Schwartz has been very hot recently and now has multiple hits in nine of his last twelve games. Ramirez has had two hits in each of his first two September games.

Colon was excellent yet again for the Cyclones during his start on Saturday. Since the start of July, Colon has given up one earned run or less in ten of his eleven appearances. The peripheral stats back up his strong ERA, as he has struck out 10.4 batter per nine innings while walking just 2.3 per nine. Acosta continues to dominate out of the bullpen. After posting a 9.93 ERA as a starting pitcher, he has a microscopic 1.36 ERA as a reliever.

De Los Santos is normally known more for his legs than his bat, but Saturday’s performance proved that his bat has plenty of potential as well. He had St. Lucie’s only two extra bases hits, with his second-inning home run leaving his bat at 108.2 MPH and travelling 425 feet. The home run was a three-run blast, providing St. Lucie with all the offense that they would need (and all the offense they would get) for the rest of the game.

Parada has had plentiful days off since he began his professional career, which may explain some of his lack of hitting. Though, the root of the cause may also lie in the fact that pitchers just seem afraid to pitch to him. He has walked eight times over his first 35 professional plate appearances while striking out just six times.

Díaz worked around plenty of traffic on Saturday evening. His 86 pitches through four innings show just how hard he worked to get out of his numerous jams. His curveball was his best and most used pitch. It generated a good but unspectacular 29% whiff rate but also led to eight called strikes (none of his other pitches resulted in more than two called strikes). Díaz’s fastball was in its standard 92-96 MPH range.

Lucchesi came out of the bullpen for his second straight appearance and needed just 13 pitches to get through two scoreless innings. His fastball sat around 90 MPH and generated no whiffs on six swings. Ovalles generated an outstanding 2578 RPM average spin rate on his fastball.