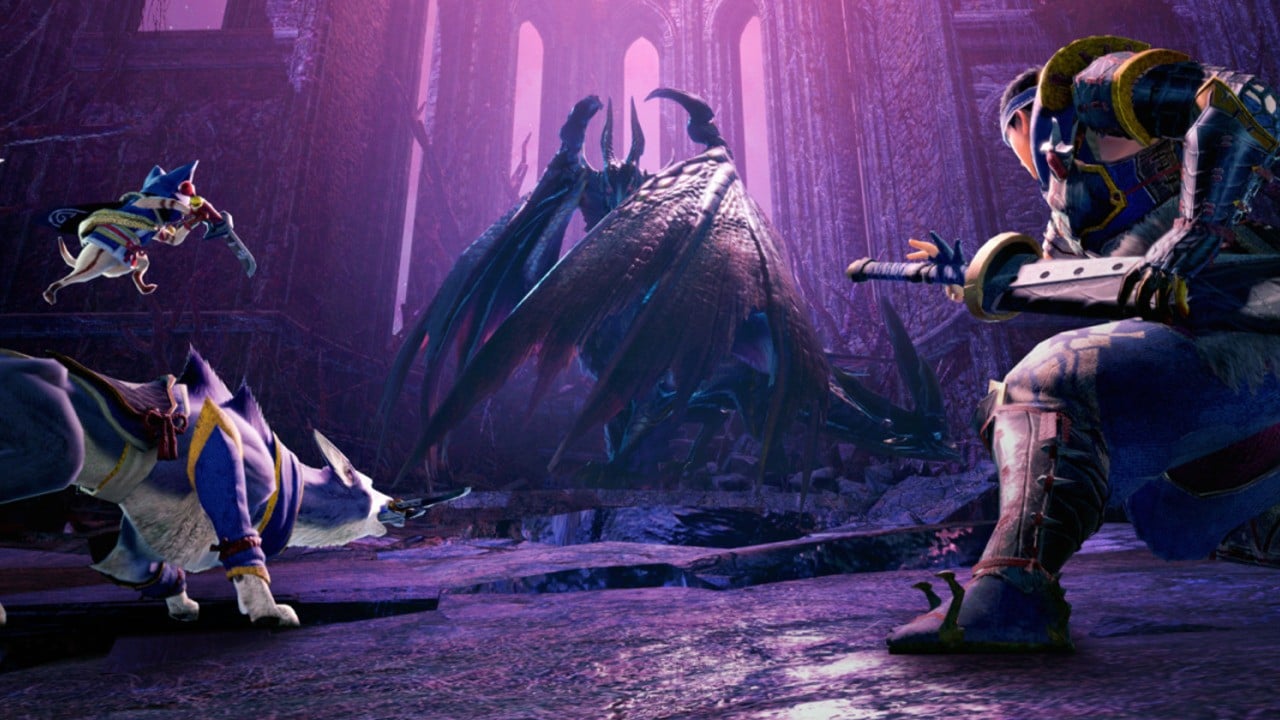 Monster Hunter Rise has proven to be a welcome continuation of the IP’s global growth in popularity, following the breakout mainstream success of 2018’s Monster Hunter: World and its Iceborne expansion on non-Nintendo platforms. Rise itself brought some interesting evolutions from World, retaining more of the quirky charm we loved in previous generations on platforms like 3DS, Wii and Wii U, while shaking up the formula for the better (well, in this writer’s opinion, anyway). It delivered load-free open zones, faster traversal and verticality, and new mechanics to give combat a fast-paced, stylish feel.

It was relatively easy, though, by Monster Hunter standards. Not only did Capcom do some welcome streamlining of the ‘grind’, but a lot of encounters barring a small number of exceptions were more manageable and less terrifying than perhaps expected. This was partly due to new movement and mechanics improving our abilities, but we can also be guilty of forgetting that Rise was the ‘base’ game.

In the West on 3DS and Wii U, we typically got the ‘base + expansion’ game as one delayed localised release, so all the content and challenge was there from the start. With the arrival of Sunbreak we’re now in-step with our fellow Japanese hunters (largely thanks to Capcom’s successful gamble and strong sales of World), and we get our ‘massive expansion’ to take the hunt to another level. Sunbreak achieves its goals, and helps us remember that Monster Hunter is bloomin’ hard.

Even accessing Sunbreak requires you to get all the way to the middle ‘ending’ of the core campaign, a point where you unlock the initial ranking system. This is really to prepare you for the challenge, as the natural grind should ensure you jump into the new content with reasonable gear. Capcom has been generous, though, serving up some free content to help players along that have rushed through the base game. Sunbreak’s introduction is rather nicely done, too, and we had that strange feeling of wanting to see the story after its classy opening. In a Monster Hunter game. We didn’t expect that.

After initial pleasantries you make your way to Elgado, a lovely new area with the vibe of a Mediterranean port. The new cast of characters were immediately likeable, even if the story can still be loosely summarised as ‘that monster on the cover is making other monsters mad, and that’s bad’. Yet the familiar progression through quests does have some twists, with particular nods to make single players feel more welcome. While Rise had a slightly messy separation of solo and group quests, here there’s just one board, and it feels utterly seamless and well-balanced whether solo or in a group. We eventually swapped between both approaches on a whim and it was still equally enjoyable; that’s more like it.

While the earliest quests see you revisiting old foes in familiar locales, this is the ‘Master Rank’, which in the old days was ‘that difficult endgame bit’ for us Western players in those complete localised releases. Immediately you’ll notice that it takes longer to slay the monster, it’ll be more frequently enraged, and it may even bust out more deadly versions of attacks. After a handful of early quests that go smoothly, the difficulty starts to ramp up and you’ll have to get used to fainting even if you’ve prepared properly.

A headliner addition that gives even offline play a multiplayer feel is ‘follower quests’, in which NPCs join you on the hunt. Initially these help drive the story, but eventually they unlock in plentiful supply and you’ll be off hunting with a variety of chums. Whether hunting with one character or choosing from the cast for a team of three, it’s a fun wrinkle to the formula, not to mention the fact these virtual friends distract the monsters from munching on your backside while you try to heal.

The AI is pretty darn good, too, and the only misstep is that as you progress the follower quests start to mirror ‘Key Quests’ more closely, but don’t actually count towards your tally for progressing the story. A slight annoyance, but repeated hunts of monsters really are part of the experience anyway when you’re trying to unlock awesome gear. In addition, actually doing the Follower quests (and other side quests that pop up) gives you some pretty valuable rewards in the form of new weapon and armour recipes. They’re well worth doing.

Sunbreak adds a lot of mechanical tweaks too. The heavily publicised Switch Skill Swap ability is indeed cool, though as the game gets tougher and we’re running for our lives, we often forget it’s there. The UI now has handy button reminders that aren’t as invasive during gameplay as screenshots may suggest. There are new skills for your Palico buddies to master, new moves for all the weapons, fresh and fabulously fashionable armour sets, along with all sorts of tweaks to customisation that can keep dedicated players intrigued. Even if you only loosely dive into the additional depth on offer, it’s all smartly implemented.

Which brings us to the big additions — locales and monsters. As mentioned above, it takes a while for the new monsters or variations to truly show up, but they’re fantastic when they do make an appearance. The locales are among our favourites too — the popular return of Jungle has impressive hidden depths if you snoop around near its temple, and the new ‘Citadel’ environment is among our favourites ever in the series. It’s no secret if you pay attention to the name or any advertising that it’s going for a bit of a horror ‘Dracula’ vibe, and it really nails that style. Some of the skylines and environmental detail in Citadel are an absolute delight.

Whether battling remixes of tough monsters, new monsters to this game or those that are brand new to the franchise, it’s some of the most exciting hunting we can remember. The monsters look scary, animate beautifully, and seem to really get excited when you’re flattened and struggling to recover. It’s tough and we’ve had quest failures, especially when playing with strangers online, and we’ve had solo runs where we’ve frantically captured the monster on low health and our final ‘faint’. It’s all more frenzied in general, too — we’ve seen multiple examples of three big monsters converging on one spot to have a scrap while we take the chance to watch and sharpen our trusty Insect Glaive. It’s marvellous stuff.

It’s the sort of difficult, unrelenting action that makes you genuinely exhale in relief when it’s done. For those who want Monster Hunter to challenge them, Sunbreak steps up.

Pleasingly, it also remains a showcase of technical wizardry, whether playing docked or handheld. We still feel Rise + Sunbreak shine best as a portable marvel, but the game looks excellent on the TV as well. Performance is a very solid 30fps for the most part, though one section of Flooded Forest is still a bit of a bottleneck. Audio is fantastic too; the Sunbreak soundtrack is phenomenal. Whether relaxing in Elgado or battling a monster, it’s easy to get swept away.

Sunbreak is a success in multiple ways, with enough that’s new or different to make it a must-have expansion for Monster Hunter Rise fans. New mechanics and content are enjoyable, the challenge is turned up, and it’s still an audiovisual treat. It’s a welcome reminder that there’s nothing else quite like Capcom’s monster-slaying franchise, and even in moments where it’s ‘just more of the same but harder’, that’s still more than enough.

Now excuse us as we get back to the hunt. That fashionable armour isn’t going to craft itself.