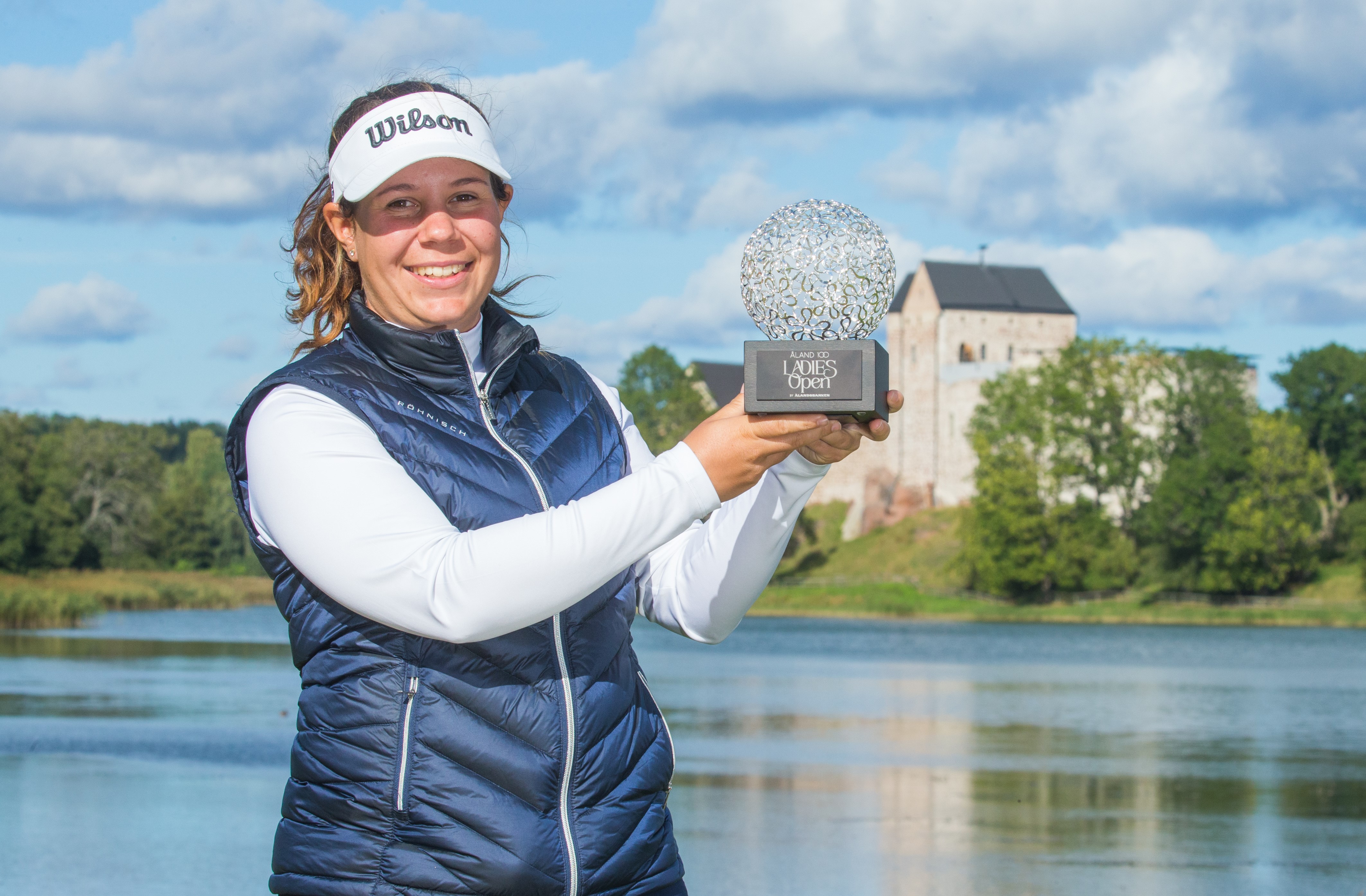 The 25-year-old from Nantes in France went into Saturday’s final round a stroke adrift of overnight co-leaders Ana Pelaez Trivino of Spain and Lisa Pettersson of Sweden. Pettersson took the early advantage on a beautiful morning at Alands Golf Club, but then the Austrian Emma Spitz seized the lead with a birdie on the sixth hole.

Mora made a huge putt for birdie on the fifth hole and then sank another on the long seventh, before giving a stroke back on the par-3 eighth hole. Although she pulled a shot back at the 10th, she dropped further strokes at the 11th and 13th.

Spitz led right up until she three-putted on the par-3 17th hole and as the young Austrian slipped, Mora was able to take full advantage, firing four birdies in her last five holes to lift the trophy.

After signing for 68 and a 54-hole total of eight-under-par, she said: “It feels really good to get my first win and I’m very happy. My putting was really good, but I wasn’t thinking about the score.

“I tried to play my own game and not focus on the scores. I was really nervous on 18 and we had to wait on the tee box, so I was getting more and more stressed, but it worked out. It means a lot. I actually can’t believe it.

“I really liked the course. When I arrived, I thought, this is going to be a good week, no matter what.”

Pettersson was forced to settle for her second runner-up finish in as many weeks following her performance in last week’s Skaftö Open and she said: “I started off really hot and I had a lot of opportunities that I didn’t take care of. I missed some short putts at the beginning but then I played really solid and I’m really happy that I gave it a chance on the final holes. It wasn’t enough, but I’m still happy.

“Anne-Charlotte holed a lot of long putts today so I thought that she would make that one on 18, it a pretty short straight uphill putt, but you can be nervous. It’s her first win as well, so at least I gave it a chance to make it into a play-off.

“I really enjoyed the course. It’s really pretty and it almost feels like a home tournament. The members have been so kind to me and I’ve had a great host that I’ve been staying with, so I felt very welcomed.”

Pelaez Trivino finished third after a 71 and said: “Right after playing, I told my coach that I felt really proud of myself, because I really enjoyed my round and I didn’t really focus on what was happening, but what I was doing and I think I played great. I was very unlucky on 16 because my foot slipped and I hit a shank, but besides that I think I played well. I came up short, but I’m happy with a top-three finish. I’ve never been to Finland or Åland before and I told all the volunteers that I love it. I think this is a really good golf course and hopefully we can get to play here next year.”

Spitz, who tied for 10th on her professional debut in the Skaftö Open last week, ended in fourth place on five-under-par and is undoubtedly a star of the future.

Ursula Wikstrom, buoyed by her home crowd, made a run for the title over the closing holes but came up just short. She carded a final round of 69 to lie in a share of fifth place on four-under-par with Sweden’s Sofie Bringner. Wikstrom relishes playing in Finland and is already looking forward to having another shot at her home title next year.

Chloe Williams of Wales carded a  final round of 68 to end in outright seventh position on three-under-par, two strokes ahead of Finland’s Linda Osala, who also shot a 68 to tie for eighth place alongside Swedish pair Caroline Hedwall and Sara Kjellker, who signed for a pair of 70s.

With her win, Mora vaulted 58 places from 74th to 16th on the Race to Costa del Sol Rankings and runner-up Pettersson climbed to 24th. Pelaez Trivino moved up from eighth to sixth position, with seven events still to be played on the 2022 Ladies European Tour.

Prior to this tournament, Mora’s best finishes in three seasons on tour were a tie for eighth and 10th in last year’s Investec South African Women’s Open and the VP Bank Ladies Swiss Open respectively.

Next week’s the LET returns to Switzerland, where she will no doubt be full of confidence following her first victory.