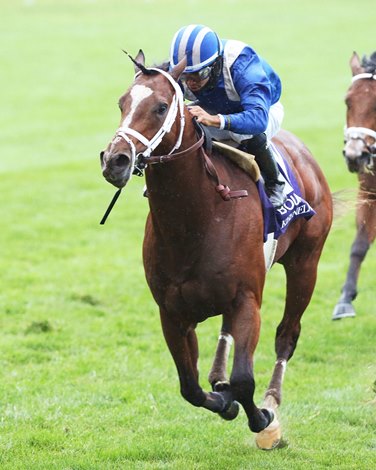 Mutasaabeq , a versatile grade 2-winning juvenile by three-time leading North American sire Into Mischief  , has been retired and will take up stud duty for the 2023 breeding season at Darby Dan Farm, the farm announced Sept. 21. The deal was brokered by The Stallion Company, and his fee will be $7,500 with a stands and nurses guarantee.

“Hailing from a sire line with a lot of upside, Mutasaabeq is a fast and precocious son of Into Mischief,” said Ryan Norton, Darby Dan Farm’s stallion director. “He is an outstanding individual with all the ingredients to be a top sire, and we’re excited about the opportunity to offer him to breeders in the upcoming breeding season.”

Bred by BlackRidge Stables in Kentucky, Mutasaabeq was a $425,000 weanling purchase by Shadwell Estate out of the Taylor Made Sales Agency’s consignment at the 2018 Keeneland November Breeding Stock Sale. He is out of the winning Scat Daddy mare Downside Scenario, who is a half sister to multiple group 3 winner Cool Cowboy  (Kodiak Kowboy ) and to Catching Diamonds  (Into Mischief), who is the dam of Curlin Florida Derby Presented by Hill ‘n’ Dale Farms at Xalapa (G1) winner White Abarrio . The immediate family also produced Brazilian group 1 winners and champions Juno  and Love ‘n’ Happiness  along with American grade 1 winner Fiesta Lady  and graded stakes winners Pee Wee Reese  and Sam Who.

As a racehorse, Mutasaabeq came out running at 2 for trainer Todd Pletcher. He broke his maiden in his debut at Saratoga Race Course by 4 1/2 lengths and in his next start was third in the Runhappy Hopeful Stakes (G1) behind eventual multiple grade 1 winner Jackie’s Warrior   and multiple grade 1-placed Reinvestment Risk . He became a graded stakes winner in his third start when he won the Bourbon Stakes (G2T) at 1 1/16 miles on the Keeneland turf by 2 1/4 lengths. At 3, Mutasaabeq showed his versatility by capturing the one-mile Mucho Macho Man Stakes on Gulfstream Park‘s main track, where he beat graded-placed stakes winner Papetu  by 1 1/2 lengths.

Spendthrift Farm’s Into Mischief was the leading North American sire in 2019-21 and is currently leading the general sire ranks with more than $19.4 million in progeny earnings and is the leader by number of winners (187), number of black-type stakes winners (22), and number of graded stakes winners (12) as of Sept. 21.