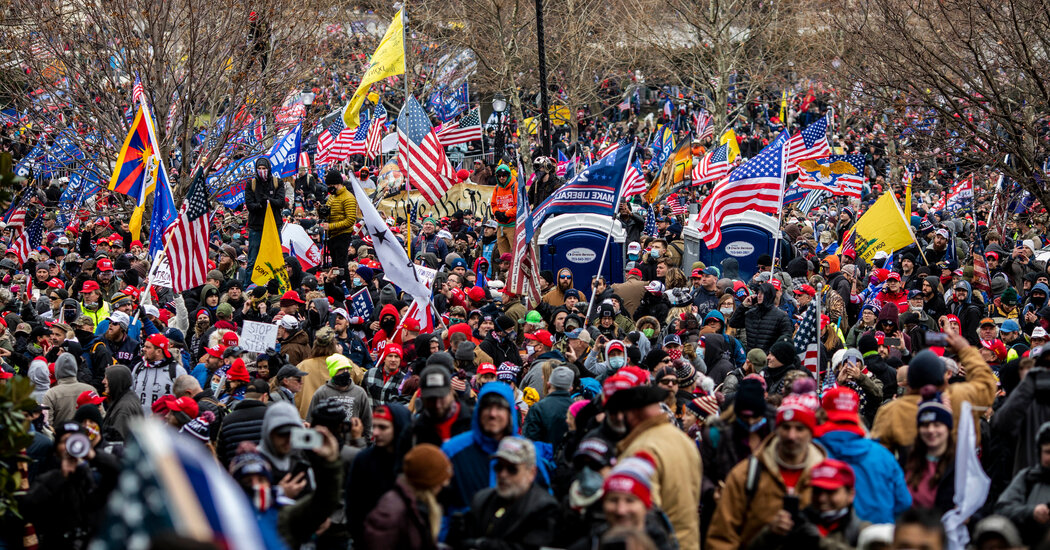 WASHINGTON — A federal judge on Thursday sentenced a Nazi sympathizer who had served in the Army reserves to four years in prison for storming the Capitol on Jan. 6, 2021, saying his “racist and antisemitic motivation” for trying to halt the election certification process set his case apart from dozens of other rioters who have been charged.

The defendant, Timothy Hale-Cusanelli, 32, was working as a security guard at a naval station in New Jersey when he joined the pro-Trump mob that broke into the Capitol. At a trial in May in Federal District Court in Washington, Mr. Hale-Cusanelli was convicted of five criminal charges, including obstruction of the certification of the 2020 election results, which took place at a joint session of Congress on Jan. 6.

Mr. Hale-Cusanelli, who held a secret security clearance at the time of the attack, tried to play down his role in the assault by telling the jury that he had no idea that Congress met at the Capitol. But just before issuing the sentence, Judge Trevor N. McFadden called Mr. Hale-Cusanelli’s testimony a “risible lie” and an “obvious attempt to avoid responsibility.”

Prosecutors argued at a hearing on Thursday that Mr. Hale-Cusanelli, who often liked to dress as Adolf Hitler, was at the front of the mob as its members assaulted the police and smashed doors and windows to enter the Capitol. Mr. Hale-Cusanelli also urged those around him to “advance” on the building, prosecutors said.

In a sentencing memo filed last week, the government noted that in the days after Jan. 6, Mr. Hale-Cusanelli told his roommate at the naval station that he had been exhilarated by the storming of the Capitol, comparing it to a “civil war.” The memo also said that Mr. Hale-Cusanelli told his roommate that he wanted to “root out entrenched interests” in the United States, specifically “Jewish interests puppeteering the media, major corporations, the Democratic Party, Joe Biden and the government as a whole.”

After handing down the sentence, Judge McFadden said he believed Mr. Hale-Cusanelli’s past actions reflected “deep hostility and insensitivity” toward ethnic and religious minorities, which, he added, had significant consequences, including encouraging a recent rise in antisemitic attacks across the country.

While prosecutors said in their memo that Mr. Hale-Cusanelli “subscribes to white supremacist and Nazi-sympathizer ideologies,” the jury at his trial saw only a small portion of the government’s evidence that he held extremist views.

“Hale-Cusanelli is, at best, extremely tolerant of violence and death,” prosecutors wrote. “What Hale-Cusanelli was doing on Jan. 6 was not activism, it was the preamble to his civil war.”

Prosecutors urged Judge McFadden to impose a lengthier sentence on Thursday, describing Mr. Hale-Cusanelli’s decision to storm the Capitol as a “test of the guardrails of the law.”

How Times reporters cover politics. We rely on our journalists to be independent observers. So while Times staff members may vote, they are not allowed to endorse or campaign for candidates or political causes. This includes participating in marches or rallies in support of a movement or giving money to, or raising money for, any political candidate or election cause.

Even though prosecutors spent much of the trial highlighting sexist and racist comments that Mr. Hale-Cusanelli had made before the riot, they insisted on Thursday that the case was not about his right to “hold unsavory views” but about what they described as his attempt to dodge responsibility.

“He sat in that chair and lied to the jury in this court,” said Kathryn Fifield, a prosecutor. “He lied under oath.”

At the hearing, Mr. Hale-Cusanelli’s lawyer, Nicholas Smith, acknowledged that his client had made “ugly and childish comments” in the past. But he stressed that Mr. Hale-Cusanelli had not committed the same crimes as other rioters who brought weapons to the Capitol or attacked police officers.

Mr. Smith described his client’s actions as part of coping with a difficult upbringing and estrangement from his parents. Mr. Hale-Cusanelli’s words alone did not “imply that he’s about to launch a civil war,” Mr. Smith said.

While in jail awaiting sentencing, he said, Mr. Hale-Cusanelli had spent long stretches in solitary confinement and had received death threats from at least one other inmate.

“I disgraced my uniform and disgraced this country,” he said.

Mr. Hale-Cusanelli became the center of a controversy this month when Cynthia Hughes, who describes herself as his “adoptive aunt,” appeared at a Trump rally in Pennsylvania and spoke about his case. At the rally, Ms. Hughes, who runs a fund-raising website that accepts donations for Jan. 6 defendants, pointed to the nearly two years that Mr. Hale-Cusanelli had spent in jail before his trial as an example of the injustices facing those charged in the Capitol attack.

Ms. Hughes appeared at the sentencing hearing. She was joined by other prominent supporters of Jan. 6 defendants, including Nicole Reffitt, whose husband, Guy Wesley Reffitt, was sentenced last month to more than seven years in prison, and the mother of Ashli Babbitt, a rioter who was fatally shot by the police during the attack.

Mr. Smith briefly sought to contrast Mr. Hale-Cusanelli’s case to that of Mr. Reffitt, who he said committed “meat-and-potatoes obstruction” by warning his children not to speak with investigators.