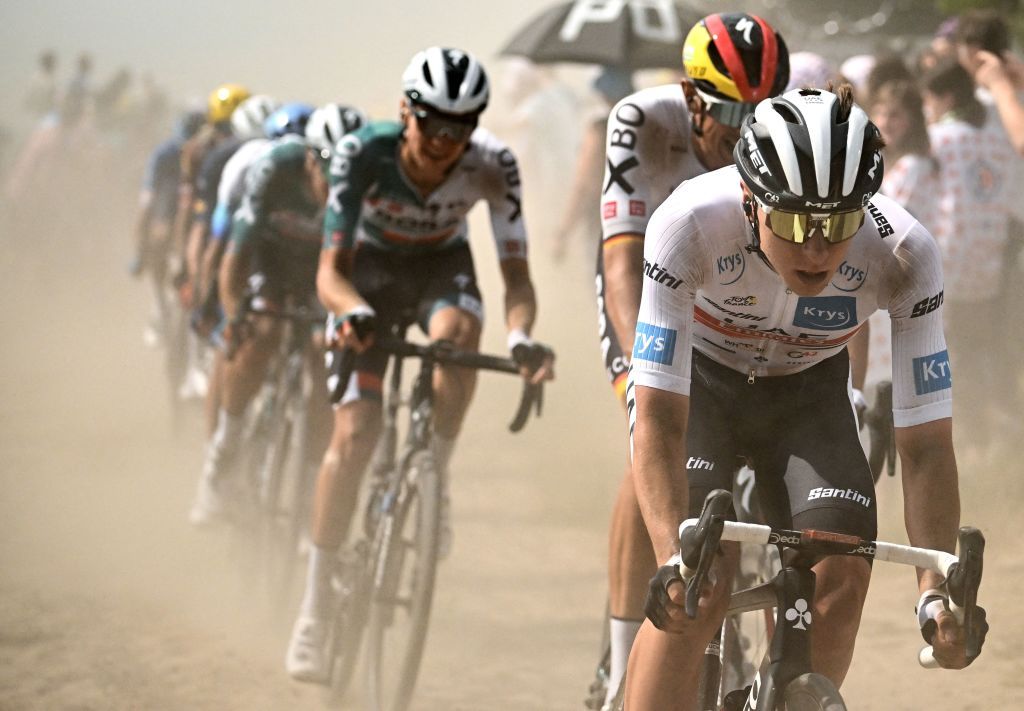 Just like in the opening time trial in Copenhagen, Tadej Pogačar (UAE Team Emirates) was the best of the Tour de France overall contenders after racing aggressively on the Paris-Roubaix cobbles on stage 5.

The two-time Tour winner was unable to catch the break when he attacked with Jasper Stuyven or gain enough time on Wout van Aert and the chase group to take the yellow jersey, but was one of the few overall contenders who could be happy with his day on the cobbles.

“It was a really good day, I felt good on pavé and I wasn’t unlucky in any way,” Pogačar said post-stage after keeping the best young rider’s white jersey.

“Being best of the favourites in the time trial and again in the Roubaix stage gives me confidence, a boost of confidence. I can’t wait to get to the mountains.”

Pogačar admitted that it had not been an easy day out, despite him looking fresh and happy.

“That was a really hard day. It was quite stressful in the first part, and the second part was really tough,” he said.

“It was a lot of power on the pedals through the day and the cobbles were dusty and dangerous. I like cobbles, but at the same time, when it’s not dry, it’d be a very different experience. The cobbles I really like are on the Champs Elysées.”

Primož Roglič (Jumbo-Visma) dislocated his shoulder in a crash and lost 2:08 to his fellow Slovenian, while Ben O’Connor (AG2R Citroën) lost 3:21 and Jack Haig (Bahrain Victorious) crashed out altogether.

Pogačar was isolated up front after Brandon McNulty crashed but he didn’t seem concerned. He made two surges on cobbled sectors and another on the road before hitching a ride with Stuyven.

“We were just strong enough to be in the middle of the action but it wasn’t easy at all, I suffered quite a bit. We were strong and in the end I could follow Jasper Stuyven,” Pogačar explained.

“There were some guys ahead of me, but I tried to race it intelligently. I’m just happy this day is over and I rode well. In the end it was a really good day for me and the team.”