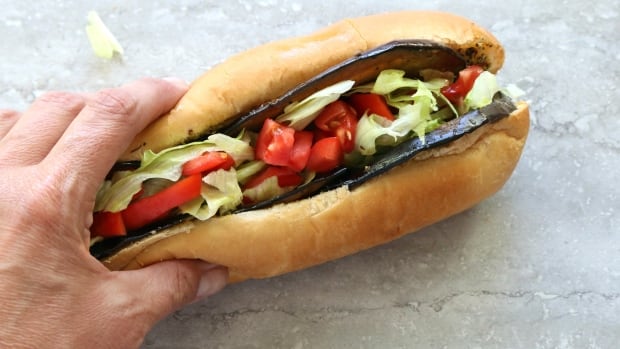 This summer, I’ve had several requests for a recipe for Lebanese garlic sauce. They make fantastic versions at Jimmy’s A&A, Jerusalem Shawarma, Damascus Fine Mediterranean Foods and other eateries around the city.

The intensely garlicky sauce, called toum, is a thick, fluffy emulsion of fresh garlic, lemon juice, oil and salt; it’s more jiggly than mayonnaise and completely addictive on everything.

Calgary Eyeopener host Angela Knight was as enamoured with it as I am — she told me this is hands-down her favourite thing I’ve made in the 17 years I’ve been on the show.

Most recipes are similar, but I found Yumna Jawad’s recipe and video on her blog, Feel Good Foodie, very helpful.

This is how I made it!

This fluffy, creamy, garlicky sauce is simple to make in a food processor and delicious on just about everything.

If any of your garlic cloves have green tips, cut them in half lengthwise and pull the green sprouting bits out of the middle.

In the bowl of a food processor, pulse the garlic and salt until finely minced. Add a small pour of oil — about two to three tablespoons — and pulse, scraping down the side of the bowl, until you have a paste.

It makes about four cups; it keeps in the fridge for at least a month.

Peppino Italian Deli has been a Calgary institution since Joe Lecce opened it in 1993.

Now, they have five locations and have gone from nine sandwiches on their menu to 42.

This sandwich is delicious in its simplicity: thinly sliced, grilled eggplant marinated in herbed olive oil, and layered with chopped tomato and shredded iceberg lettuce on an Italian sub roll.

Nick Lecce explained how they grill their eggplant, and it couldn’t be simpler. Don’t salt it, don’t oil it, just slice and grill until nicely char-marked, then store in a container doused in herbed oil and sprinkled with salt, ready for your next sandwich.

Cut your eggplant lengthwise into ¼-inch thick slices and cook on a preheated grill until nicely char-marked.

Transfer to a bowl, dish or container and cover with herbed olive oil. Sprinkle with salt (in between the layers, if you’re piling them).

Let marinate for at least 24 hours, and up to a week.

When you’re ready to make your sandwich, split open your bun and drizzle both sides with the herby oil. Layer grilled eggplant on both sides, then pile with shredded lettuce and chopped tomato.

Serves as many as you like. One eggplant makes three to four good-sized sandwiches.