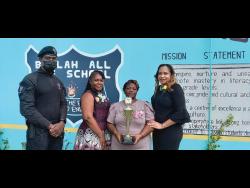 A scholarship was launched on Friday in honour of murdered Beulah All-Age and Infant School students Sharalee and Rafaella Smith.

The sisters, aged 12 and five, respectively, were victims of a throat-slashing massacre on June 21 in Cocoa Piece, Clarendon. Their mother and two other siblings, including a 23-month-old boy, were also killed during the attack.

The scholarship, a partnership between Clarendon-based charity foundation James & Friends and the Delta Shield Company Limited, was launched on Friday during the school’s graduation ceremony.

Little Rafaella, who was set to graduate, was named among the top academic performers.

Each year, two students will benefit from the Sharalee and Rafaella Smith Scholarship. One student entering grade five will receive a $250,000 grant and another leaving grade six will cop a $500,000 grant. All recipients will benefit annually until the completion of tertiary studies.

“When it comes to James and Friends Foundation, academia is at the top, so we’re looking for students who are constant performers,” said Marjorieth Manning, sponsor and one of the foundation’s directors.

Delta Shield’s Executive Director Patricia Garib said the mass murder has left her speechless. She said, however, that her team was pleased to be involved in the venture, adding that Delta Shield is committed to supporting the needs of students.

“We’re happy for this. The names Sharalee and Rafaella Smith will never be forgotten, and we will definitely use it as an incentive in their memory to help students to work hard towards being the beneficiary of this scholarship,” said Gayle-Little.

Gayle-Little lauded the foundation’s founder and alumnus Otis James, and other past students, for continuing to make stellar contributions to the school.