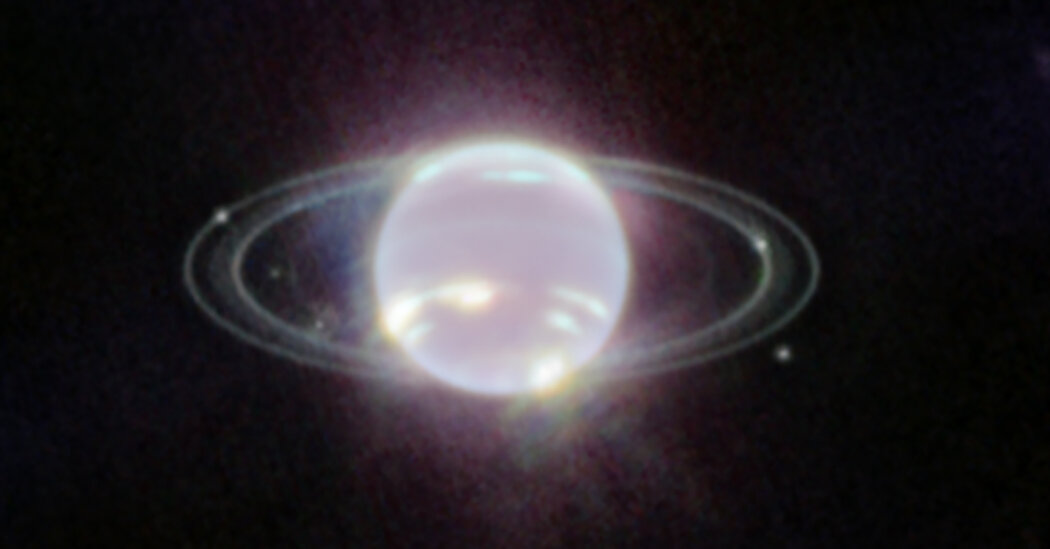 No spacecraft has visited Neptune since 1989, when the NASA probe Voyager 2 flew past on its way out of the solar system. Neptune, which is four times as wide as Earth, is the most distant planet of our solar system. Voyager 2’s observations whetted the appetites of astronomers, who were eager to learn more about the ice giant.

On Wednesday, the James Webb Space Telescope cast its powerful gold-plated eye onto this remote world. The power of this infrared machine, the largest and most advanced telescope ever sent to space, has provided some of our best views of Neptune in 30 years.

“I have been waiting so long for these images of Neptune,” said Heidi Hammel, an interdisciplinary scientist at the Space Telescope Science Institute in Baltimore, which runs the Webb telescope. “I’m so happy that it has worked.”

Ground-based observatories and the Hubble Space Telescope have taken many images of Neptune in the past three decades. But the Webb’s views of Neptune, taken in July, provide an unprecedented glimpse at the planet in infrared light.

It took just a few minutes for the telescope to image Neptune close up, and another 20 to take a wider view, revealing not just the planet but myriad galaxies behind it stretching into the cosmos. “It’s aesthetically fascinating to see those distant galaxies and get a sense for how small the ice giant appears,” said Klaus Pontoppidan, Webb project scientist at the Space Telescope Science Institute.

Most prominent in the telescope’s view are Neptune’s rings, seen encircling the planet at a slight tilt given its orientation to Earth. The Webb telescope will allow astronomers to measure the reflectivity of the rings, offering an unmatched insight into this remote spectacle. New images could reveal the size and composition of these thin bands, which are probably made of ice and other debris.

“The ring system was absolutely mind-boggling to me,” Dr. Hammel said. “I have not seen it in that level of detail since the Voyager encounter in 1989. It just pops right out.”

Across the planet there are bright spots believed to be clouds of methane ice, which rise high into the planet’s skies and can persist for days.

“Nobody really knows what these things are,” said Patrick Irwin, a planetary physicist at Oxford University. “They seem to come and go, a bit like cirrus clouds on Earth.” The Webb telescope’s future observations could uncover how they form and what they are made of.

Webb images also show seven of Neptune’s 14 moons. The brightest is Triton, the planet’s largest moon, which scientists suspect was captured by Neptune’s gravity early in the solar system’s history. In infrared images, Triton’s frozen nitrogen surface makes it shine like a star, brighter than Neptune itself, because methane dims the planet in infrared light. NASA recently declined to send a mission to study Triton, and not much can be gleaned about it from this image. But future Webb observations should hint at the composition of Triton’s surface, and could show changes indicating geological activity.

“Triton is a geologically active world,” Dr. Hammel said. “When Voyager 2 flew by, it saw cryovolcanoes erupting. So there is a possibility that there are changes in the surface chemistry over time. We will be looking for that.”

Dr. Hammel also thinks a glimpse of Hippocampus, an eighth Neptunian moon, is pictured just above the planet. “It’s very faint, but it’s in the right location,” she said.

These images of Neptune are just the latest in Webb’s tour of the solar system. This week we were treated to the telescope’s first glimpses of Mars, while over the summer we saw amazing views of Jupiter. Much more of our solar system will come under the observatory’s roaming eye, including Saturn, Uranus and even remote icy objects beyond Neptune — such as the dwarf planet Pluto.

“It illustrates that we are an all-purpose observatory,” said Mark McCaughrean, a Webb telescope scientist and a senior scientific adviser at the European Space Agency. “We can observe very bright things like Mars and Neptune, but also very faint things. Everybody now sees that it works.”