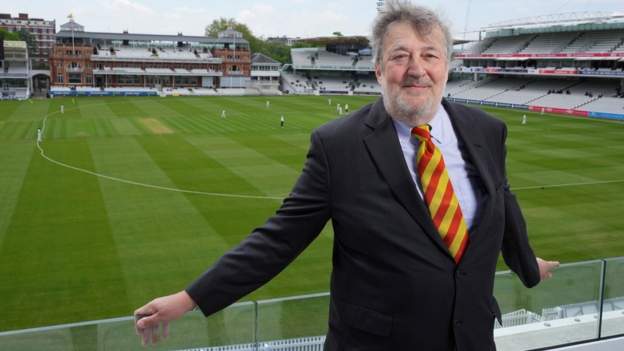 A small boy at Lord’s was waiting to snatch a signature from one of England’s great cricketers.

To Tony Greig, it was the sort of encounter that happened all the time. But to Stephen Fry, then a child on his first visit to the ‘Home of Cricket’, it meant everything.

“I got ruffled on the head when he gave me his autograph, because I wished him good luck in a high voice,” Fry chuckles.

“That was as close as I thought I would get to cricket.”

But Fry was wrong. In October, the actor and writer will begin a 12-month term as president of Marylebone Cricket Club.

Dating back to 1787, the club is responsible for everything from the running of Lord’s to promoting the game on the global stage.

And with just under three months to go until his term begins in October, Fry has been telling the BBC’s LGBT Sport Podcast about what he hopes to achieve – and why the appointment means so much to him.

‘Cricket is a river… we just need to divert it a little here, channel it there’

Fry will be the 170th president of the MCC, with his predecessors drawn from both inside and outside the world of cricket. They include former England captains Gubby Allen, Mike Brearley and Mike Gatting, the writer and lyricist Sir Tim Rice, and the Duke of Edinburgh.

By his own admission, Fry is not a cricketer in almost any sense. Instead, he is an enthusiastic fan and amateur who spent his childhood bowling apples at a swing in the garden. He would mark out lengths with a piece of paper in the hope he could find the right one to make the swing move.

“I’d never seen a game that had so much possibility, so much change, so much variety,” Fry says.

“The fluctuations from over to over, the speed with which your ability to read the game had to be refocused. I didn’t realise what a fast, furious and violent game it is. It just thrilled me.”

Fry wants others to be hooked by cricket in the same way he is, and has put opening the game up to everyone at the top of the agenda for his presidency.

He arrives at a time when cricket’s ruling bodies are becoming increasingly aware of the need to be more representative. Fry is taking over the role from former England captain Clare Connor, the MCC’s first female president, who herself replaced former Sri Lanka captain Kumar Sangakkara, its first non-British president.

“Cricket is a river, it’s always moving, and maybe we just need to divert it a little here, channel it there,” Fry says.

“That’s what I’ve been thinking of since this dream job arrived.

“Clare Connor went to Lebanon recently, and I’ve been speaking to two fantastic women who are helping to set up Major League Cricket in America, so it’s all going in the right direction.

“And you don’t have to be a practitioner to be involved… you can write, you can blog, you can go with your friends to a match dressed as Mario and Luigi!

“There are all sorts of ways that sport can be available to people – but the channel needs to run faster, to help more people come to the game.”

With Fry succeeding Connor, who took over from Sangakkara, is it significant that an out gay man is following in the footsteps of the MCC’s first female and overseas presidents?

“It shows how the MCC is going in an interesting direction without, I think, undue ‘wokery’.

“I’m very happy to be flying the rainbow flag alongside the MCC, as it were. I’m not planning to fly it at Lords, by the way, though in June next year, I think I will push for it!”

If that last point was made with a knowing laugh, Fry is serious about some of the issues the game faces when it comes to inclusivity.

Last November, on the same day that the former Yorkshire player Azeem Rafiq told a parliamentary committee about his experiences of racism within cricket, Fry gave the MCC’s annual Cowdrey Lecture, and spoke then of the need for more diversity within the sport, and how it must tackle elitism and discrimination.

“One of the things I’d like to remind people is that, in the world of cricket, there are issues that have to be faced,” he says.

“For example, in the West Indies, in most… Antigua, Barbados, Barbuda, most of the islands there, it is illegal. Homosexuality is illegal, and let alone when you start coming to Bangladesh and Pakistan… and where Pakistan has been playing its matches in the past, in the United Arab Emirates, it’s even worse.

Fry has plenty to keep him occupied for the rest of the year.

There are documentaries on natural history and dinosaurs, a Netflix project that’s being kept under wraps for now, and a film in which he plays a fictional King of England whose son falls in love with another man.

But Fry has carved out plenty of time in his schedule for when his presidency starts to promote the game he adores.

“I’m trying to go and talk to schools and clubs and to go round the world a bit, and fly the flag for the MCC and openness and accessibility in cricket,” he says.

“The MCC is a name that’s known so much around the cricketing world, and there is so much influence you can bring to bear.

“To have such an important role in cricket is the highest I can ever ascend in this game I love. I’m constantly having to pinch myself.”

Stephen Fry was speaking to Jack Murley on the BBC’s LGBT Sport Podcast. You can hear new episodes every Wednesday on BBC Sounds.