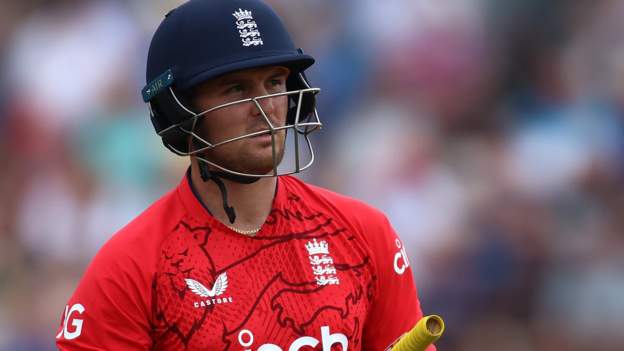 Opener Jason Roy has been dropped from England’s squad for the Twenty20 World Cup in Australia but bowlers Mark Wood and Chris Woakes are fit to return.

England Test captain Ben Stokes is included despite missing all of England’s T20s since March 2021.

White-ball captain Jos Buttler will miss the start of the tour of Pakistan, with Moeen Ali deputising as skipper.

England play seven T20s in Pakistan from 20 September before the World Cup starts on 16 October.

Roy, 32, has been an integral part of England’s white-ball success in recent years, but has endured a poor summer.

His highest score in his past 11 international innings is 43 and he managed only 51 runs in six innings for Oval Invincibles in The Hundred, including three ducks.

“I don’t see that this is Jason’s T20 career over. We still see the 50-over format as his strongest suit, so still see him as very much a part of that set-up.”

England have included five uncapped players in a squad of 19 for the series in Pakistan, while the squad for the World Cup is trimmed to 15, with three travelling reserves.

Buttler’s side play three matches against hosts and defending champions Australia before the tournament. England’s campaign begins against Afghanistan in Perth on 22 October.

England, the 50-over world champions, were beaten semi-finalists in the last T20 World Cup in 2021 and reached the final in the previous edition in 2016.

This will be their first global white-ball tournament since 2014 without the leadership of Eoin Morgan, the former captain who retired in June.

Both Wood, 32, and Woakes, 33, last played for England on the Test tour of West Indies in March. They return from elbow and knee surgery respectively and boost an injury hit pace-bowling department that remains without Jofra Archer.

“They are back in with fingers crossed,” added Key. “The likelihood for Wood and Woakes is they will start getting fit at the back end of the Pakistan trip.”

Stokes, who continues to be available for T20s despite retiring from one-day internationals, is rested for the tour of Pakistan, which begins little more than a week after England’s final Test against South Africa at The Oval concludes.

Liam Livingstone is another missing the Pakistan leg as he continues to recover from an ankle injury, while World Cup reserve Tymal Mills (toe) will also go straight to Australia.

Buttler has a calf injury, but is expected to be fit for the latter stages of the Pakistan series. His absence means Moeen, whose family originates from Pakistan, will have the honour of leading England on their first tour of the country in 17 years.

Key confirmed England’s intention to tour Pakistan despite the floods that have devastated large parts of the country. England pulled out of a trip to Pakistan last year citing “increasing concerns about travelling to the region”.

“It’s a trip we’re desperate to go on,” said Key. “It’s going to take a lot for us not to get out there.

“Hopefully us going out there and playing will be a positive story in what has been a pretty harrowing time for the people of that country.”

Warwickshire quick bowler Olly Stone, who has played three Tests and four ODIs for England, makes his return to international cricket from a back injury as part of the quintet of uncapped T20 players for the Pakistan tour.

He is joined by Middlesex pacer Tom Helm, Lancashire left-arm fast bowler Luke Wood and batters Jordan Cox and Will Jacks of Kent and Surrey respectively.