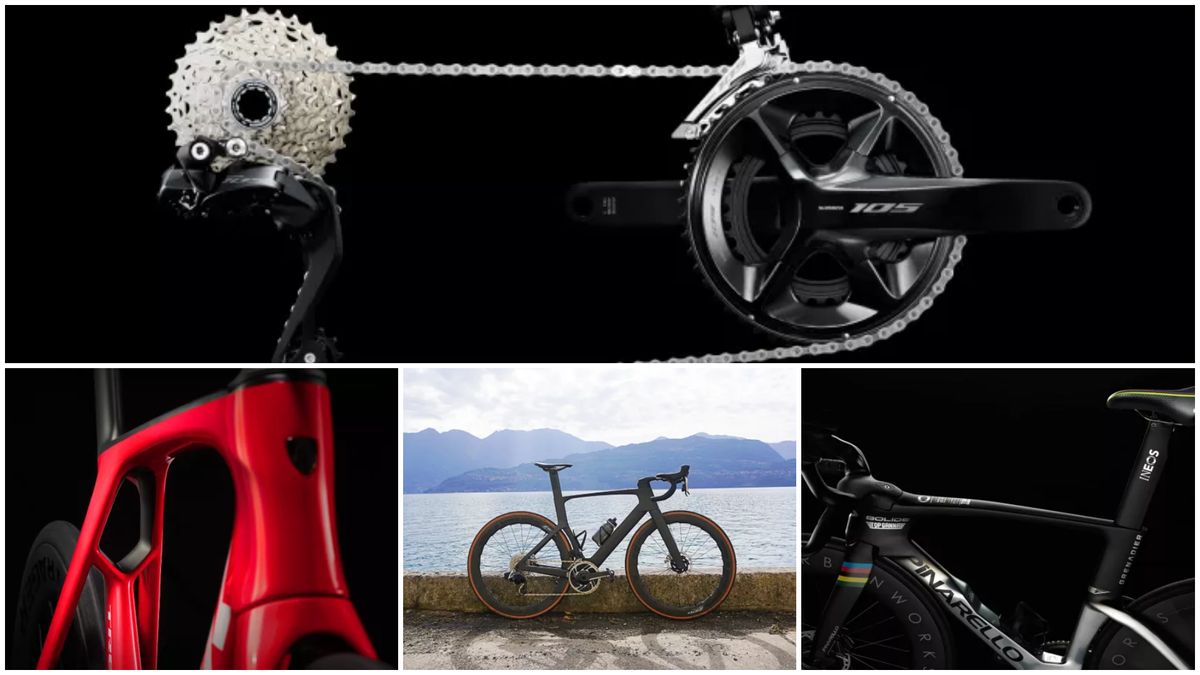 This month we’ve got two big hitters: the hotly anticipated Shimano 105 12-speed Di2 groupset and a run through of all of the new bikes – both those released and still yet to be officially announced – that look set to be ridden at the Tour de France.

Now, we did record this before the first stages of the Tour took place – so we have now seen some of these bikes in action. Others are only likely to be brought out once we get to the high mountains – we’ll have to see.

But just before we get into all of that, we just wanted to let you know that we’ve partnered with Garmin to give away a brand new Garmin Edge 1040 head unit.

It might not have the fancy solar tech, but the rest of the specs are all the same – and with a claimed 35 hours of battery life (up to 70 hours in battery saver mode) it still boasts an impressive run time.

The key features include multi-band GPS for even more accurate location tracking, a whole new user interface that’s more intuitive to use than before, and clever pacing software which can tell you how hard you need to push on the climbs and the flats to get round a course most efficiently (i.e. quickly).

To be in with a chance of winning, simply click this link (opens in new tab) or fill in the form below. We’ll get in contact with the lucky winner by the end of this month. If you don’t end up being the lucky one – don’t worry, we’ll be running it again next month.

Having unveiled 12-speed Ultegra and Dura-Ace last year, an update to Shimano’s third tier 105 groupset was clearly on the cards – but that still left many questions as to what form the refresh would take.

Would a 12th sprocket be introduced and the mechanical shifting retained? Or would electronic shifting be trickled down whilst keeping the gearing the same?

Turns out it was both, with a jump to 12-speeds and Di2 derailleurs being bestowed upon105 simultaneously. What’s more, most of the other tweaks that we introduced for Ultegra and Dura-Ace have been assimilated too – the most significant being the 10% wider spacing between the brake pads and the rotors, the option for wireless shifters, and a change to the bleed port for easier maintenance.

12-speed 105 is about a grand cheaper than 12-speed Ultegra, although it is about a grand more than what 11-speed Shimano 105 would previously sell for. So this update does mark a bit of a step away from being ‘the people’s groupset’ – which the previous groupset was fondly known as.

For a deeper dig into all the stats, specs and our verdict on the new gruppo, you can check out our Shimano 105 12-speed Di2 launch story. Or you can find our collection of all the bikes already sporting the new groupset over here – the cheapest of which start at £2,299.99 / $2,561.27.

It had been quite a while since the release of the last Trek Madone, so we were expecting an update – but what we weren’t expecting was a frame design quite like this.

With that gaping whole in the middle of the seattube, the new Madone was easy to spot at this year’s Critérium du Dauphiné, although it wasn’t until June 30 that the official launch was scheduled.

The benefits of the seat tube gap are said to be two-fold. First, it’s supposed to improve the aerodynamics, taking advantage of the venturi effect whereby air is taken in and accelerated out the back.

We’ve seen similar designs in aero helmets, such as Poc’s Ventral SPIN  and you can see the effect in action when you cover a hose pipe with your thumb to make the flow spray further.

The second benefit is that it makes the bike simpler and lighter, whilst still delivering comparable comfort to the previous Madone with the IsoSpeed decoupler suspension system set to the stiffest setting. So potentially a slight sacrifice in comfort, but now a size 56cm Madone SLR 9 with SRAM Red eTap is said to weigh 7.36kg.

For more information about the bike, you can find our Trek Madone launch story over here.

Although the new Foil’s profile might not be quite as radical as that of the Trek Madone, Scott still has some bold claims to make about it’s flagship aero bike’s performance.

First is that the aerodynamics have been improved to the tune of saving 1 minute and 18 seconds over 40km at 40kph, compared to the previous Scott Foil – which was already a fast bike.

It’s worth noting that these numbers refer to actual wind tunnel tests, rather than only using  CFD (computational fluid dynamics) software. Also that a complete rider/bike system was tested, rather than just the frame on its own – Scott found in its prototyping phase that although some designs might test fastest just in isolation, they actually aren’t so quick with a rider onboard.

Second, is that the comfort has been increased by taking a massive chunky out of the beefy aero seat post – allowing for much more flex. So as to retain the aero profile, Scott has integrated a faring into the seat post – but this can be swapped out for a slick looking rear light, should you wish.

Finally, Scott has managed to shed some weight compared to the previous model, with a size 54cm frameset coming in at 915g (claimed). This brings the claimed weight of a fully built bike with a SRAM Red eTap AXS groupset and Zipp 454 NSW wheels to 7.22kg.

More information on the bike can be found in our Scott Foil launch story here, while our first ride review can be found here.

The new Pinarello Bolide F was first spotted in the Tour de Suisse, with Geraint Thomas putting in an impressive performance on the bike. For that first sighting, Pinarello had used a camo wrap to try and disguise the frame.

That said, with ‘Bolide’ written hundred of times over, it made for such a distinctive look that it was very hard to miss. The wrap also didn’t disguise the absence of the controversial rim brake farings that were such an iconic feature of the model.

Surprisingly, Pinarello has tested the new Bolide as having slightly more aerodynamic drag than the previous model – though still being within 0.04% (0.0075N), so only just.

However, Pinarello still claims that this new model is a faster total package, with increased stiffness, better handling and a lighter weight. The new Bolide F can also take up to 28mm – which is very plump for a TT bike.

For more information, you can find our launch story on the Pinarello Bolide F just over here.