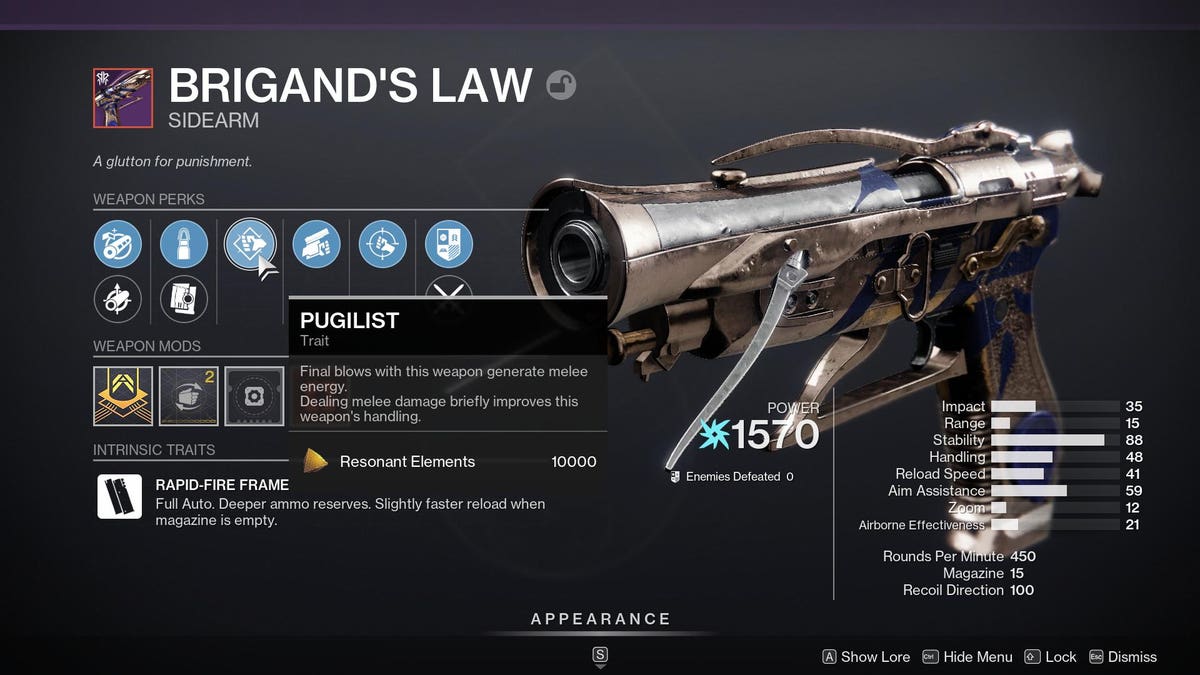 We have a brand new selection of seasonal weapons in Destiny 2 for Season of the Plunder, a bunch of spiky, Fallen, pirate weapons that can do a wide range of things between synergizing with Arc 3.0 very well to…shoot cannonballs. Yeah, that’s the ritual grenade launch. Actual cannonballs.

But the others you will need to farm and craft, either getting your god rolls randomly, or building them piece by piece with the eternal “find five patterns” task that may not be any easier this season compared to last. Either way, here is what you’re going for:

Pugilist/Swashbuckler – Lotta weird perks on this shotgun, which does not seem destined to be a big PvP pick, but these two offer some nice synergies as essentially the new demo/adrenaline junkie combo, but for punching. This also has the Right Hook origin trait for even more melee synergy.

Outlaw/Headstone – While this sounds like a hand cannon roll, it can be a lot of fun on a slug shotgun for a stasis build, given that the crystal you spawn on the headshot kill will probably be right next to you rather than a ways away, which you can use for protection or shatter it with a punch.

Triple Tap/Focused Fury – An interesting potential combo for sustained DPS, I am curious to give it a shot and how it compares to something more traditional like Vorpal.

Graverobber or Pugilist/Swashbuckler – Two different kinds of melee synergies here, but I think Pugilist is probably better on an SMG for the added bonuses you get like better handling.

Ambitious Assassin/Frenzy – With AA’s recent mega-buff, you can get a ton in the mag and dish out some sold damage with frenzy.

Dynamic Sway Reduction/Elemental Capacitor – This is probably the closest thing that the gun has to a PvP roll so you can give it a shot to see how it works in Crucible, if you like.

Rapid Hit/Voltshot – Voltshot is the new perk that triggers jolt on reload, which makes this a Trinity Ghoul style long range weapon.

Shoot to Loot/Dragonfly – The classic combo returns, and Dragonfly is about to get a future buff, so you may want to hang onto a copy.

Threat Detector or Feeding Frenzy/Voltshot – This sidearm feels absolutely incredible with Voltshot, which turns it into a mob clearing machine. Absolutely must-have roll, with your reload perk of choice.

Pugilist/Swashbuckler – Another interesting use of this combo and again, combined with Right Hook turns this into a melee build’s best friend.

Rapid Hit or Clown Cartridge/Vorpal or Frenzy – This is kind of a weird one, given that I think there are just so many other linear fusions that are top notch DPS options that it just can’t compare. These four perks are probably your best bet here, but it’s hard to missing the Veist origin trait in favor of a melee-based one that is pointless on a linear fusion.

Slickdraw/One for All – Not gonna lie this just has some odd perks for an MG, and nothing super wild here. I think the new Slickdraw perk for hugely increased handling could be somewhat interesting on an MG, but nothing else here really stand out to me all that much.

Graverobber/Pugilist or Swashbuckler – Okay, uh, weird idea here, but some sort of melee-based punching MG build combined with Right Hook? Reload and get handling boosts and melee energy from up close MG action. Yeah okay this is probably nothing, honestly.

Pick up my sci-fi novels the Herokiller series and The Earthborn Trilogy.