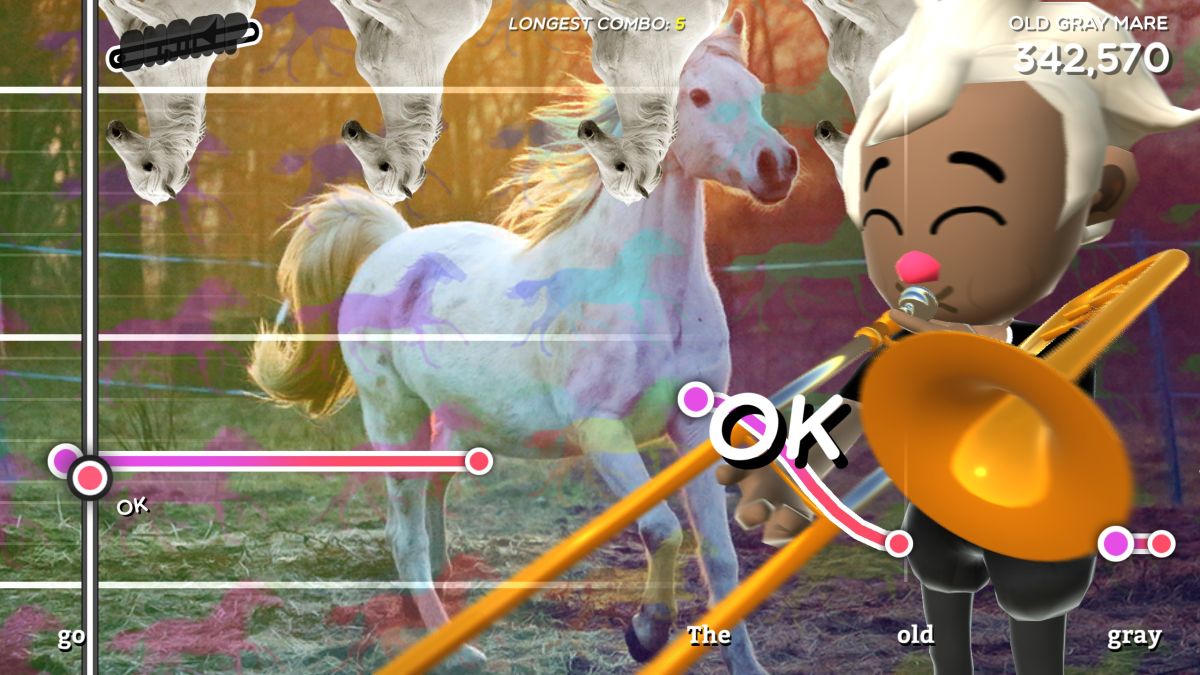 It’s not often I paste a short video of me playing a game into the PC Gamer work Slack and other writers immediately buy it on Steam. But all it took was a 90 second clip of me trying to toot out Beethoven’s Fifth Symphony in trombone-based rhythm game Trombone Champ and several copies of the game were sold. Like, instantly.

You can see the clip in the gif above, so long as you promise to turn on the sound as high as it’ll go. Yes, my performance was terrible and if Beethoven wasn’t rolling over in his grave it was only because he’d already burst out of it, staggered around shrieking, and then vomited. But in Trombone Champ, playing the trombone badly is just as much fun as playing it well, which is just one reason why I love it.

In fact, since trying out Trombone Champ for the first time this morning it’s become—and this isn’t a joke—a serious Game of the Year contender for me. It’s a blast. Or rather, it’s a toot.

Trombone Champ works like other music rhythm games: notes move across the screen from right to left, and you move the mouse up and down to meet them and then click or press a keyboard key to play the note. Accuracy and timing determine how well you play, with little words popping up to tell you how you’re doing. Words like Perfecto! Or Nice! If you’re sucking, as I typically do, you’ll get a Meh or sometimes a Nasty, which is maybe the funniest word to use to describe someone playing a trombone poorly. I doubt many music teachers use it, but maybe they should.

You’re graded at the end of each song (there are 20 in all, with a plan to add more on the game’s roadmap), and each time you play a song you earn Toots, which can be spent on Sacks, which contain Tromboner Cards. I first assumed these cards were just a joke. Some cards display famous trombone players and musicians and contain facts about how many hot dogs they could eat in one sitting, while other cards feature things like baboons, or a trumpet (described wonderfully as “the coward’s trombone”).

In fact before you even get to toot on your first trombone you’ll realize there’s more going on here, as an introductory cutscene describes ancient trombone prophecies in a manner befitting The Lord of the Rings. A flame alights in the dark. A shadowy trombone slowly begins to spin. Baboons are mentioned. It won’t be the last time baboons are mentioned, either.

I won’t sum it all up, but as you play you’ll discover:

And then there’s just the act of trying to competently play fast-paced songs on a damn trombone, which is genuinely tricky and, like I said, great fun no matter how badly or successfully you wind up playing. (Thankfully, I’d describe the scoring as almost criminally generous, so even an absolutely awful rendition won’t be too harshly graded.) I’ve laughed a lot while playing Trombone Champ, more than I have with any game in long while. Some of the humor just comes naturally from missing a note with a trombone in a song like Also Sprach Zarathustra or Beethoven’s Fifth Symphony.

But there’s also the game itself, which packs jokes onto the screen while you’re playing, like during The Star-Spangled Banner. At first an American flag flaps proudly in the background as fireworks pop off in time with the notes, but then the scene morphs into a pile of money and then, finally, an enormous greasy hamburger. And during the baboon song—there’s a baboon song—pictures of various baboons pop up while you toot to the lyrics, which mostly consist of the word “Baboon.” It’s a hilarious game. (And a great song.)

And funny as it is, Trombone Champ is no joke. The songs are almost all blisteringly fast (you can slow them down a bit in the settings) and the notes come at you with lightning speed, so many of them, and they go on for quite a while. How long is Hava Nagila? Much, much longer than you remembered, especially when you’re playing it on a trombone.