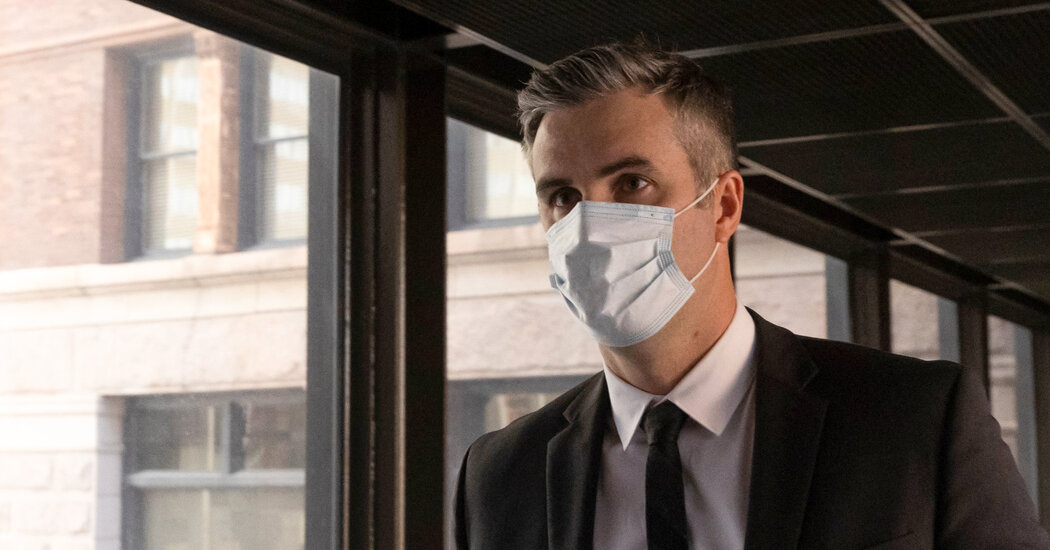 A former Minneapolis police officer, Thomas Lane, was sentenced to three years in prison on Wednesday for his role in the killing of George Floyd in 2020.

Mr. Lane, 39, who pleaded guilty in May to a second-degree manslaughter charge, has been serving a two-and-a-half-year federal sentence for violating Mr. Floyd’s civil rights and will serve the three-year sentence concurrently. As part of the plea agreement, prosecutors dropped a more serious charge of aiding and abetting second-degree unintentional murder.

Judge Peter A. Cahill, who has overseen the trial of all four officers charged in connection with Mr. Floyd’s death, accepted the plea agreement in Hennepin County District Court on Wednesday.

Mr. Lane, who has been in federal prison in Colorado since last month, attended the virtual hearing wearing a gray prison jumpsuit. Given an opportunity to address the court, Mr. Lane declined.

Four defendants. Along with Mr. Chauvin, three other officers were accused of playing a role in Mr. Floyd’s death. Tou Thao, a veteran officer who was Mr. Chauvin’s partner, held back a group of bystanders. J. Alexander Kueng and Thomas Lane helped pin down Mr. Floyd. The four men have been involved in several proceedings.

According to the plea agreement, Mr. Lane admitted that he knew the risks of handcuffing a person in a prone position from “his experience and training” as a police officer. Mr. Lane “was able to hear Mr. Floyd repeat that he could not breathe numerous times during the restraint,” the agreement says. “The defendant was also aware that Mr. Floyd fell silent as the restraint continued, eventually did not have a pulse, and appeared to have lost consciousness.”

Mr. Lane knew from his training that officers “should have placed Mr. Floyd in the side-recovery position to facilitate breathing.” Despite this, the agreement says, he “continued to intentionally assist in the restraint, creating and consciously taking an unreasonable risk of causing death, and in fact caused the death of George Floyd.”

Mr. Lane was one of four officers who responded on May 25, 2020, to a call from a convenience store clerk who accused Mr. Floyd of using a fake $20 bill to buy cigarettes. Mr. Floyd was then handcuffed and restrained face down. One of the officers, Derek Chauvin, pressed his knee on Mr. Floyd’s neck as Mr. Lane held his legs, according to the plea agreement.

Mr. Chauvin was convicted of murder last year and was sentenced to 22 and a half years in prison.

Mr. Lane’s three-year state sentence will run concurrently with his federal sentence and is not likely to change how long Mr. Lane is imprisoned because of differences in how federal and state officials calculate credit for good behavior. In Minnesota, prisoners are required to serve only two-thirds of their sentence, meaning Mr. Lane would need to serve only a two-year state prison sentence.

Federal prisoners, however, must serve about 85 percent of their sentence, or just over two years for Mr. Lane. He will be able to serve the time in federal prison.

Two other former officers — J. Alexander Kueng, 28, and Tou Thao, 36 — were also charged with second-degree manslaughter and aiding and abetting second-degree murder in Mr. Floyd’s death. They rejected a similar plea deal in August and are scheduled to stand trial in October. As Mr. Lane and Mr. Kueng helped Mr. Chauvin restrain Mr. Floyd, Mr. Thao, who was Mr. Chauvin’s partner, was keeping bystanders away.

In July, Mr. Kueng was sentenced to three years in prison and Mr. Thao to three and a half years.