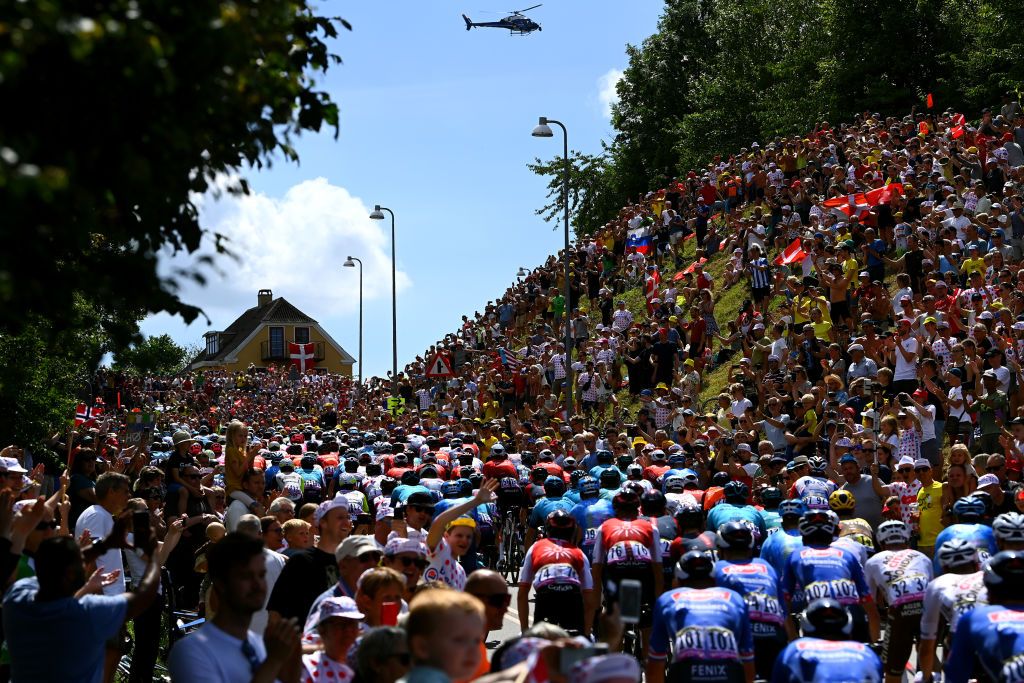 Before Dylan Groenewegen had even crossed the line to take the win on stage three of the Tour de France the teams and the organisation had already started to pack up and get ready for the near 1,000 km transfer to Calais.

The race resumes on France’s northern coast on Tuesday, but before that everything from police motorcycles to TV trucks and a giant cuddly lion sat on top of a car needs to be moved through Northern Europe.

The vehicles of the publicity caravan were loaded on to transporters while the multitude of police and event motorbikes that help the race run were loaded into three double decker trucks. Even the race organisers red Skoda’s were put onto trucks. Riders, race staff, gendarmes and media will travel on the six charter flights down to airports in Lille and Calais.

It is a massive operation and one that the teams have had to figure out complex logistics plans to ensure the riders recovery isn’t impeded. Matt Winston was in charge of Team DSM’s logistics. “We have a team in France already. They’ll prepare the riders’s dinner, and we’ve already got their bikes in France. It’s their fourth bike, so we run a full set up here with three bikes per rider and then there’s a bike in France.” He explained.

Winston’s aim is to make it as smooth as possible for the riders. “The nutrition team prepared some food and they’ll have some on the plane tonight then dinner when they get to the hotel, hopefully around 10.30 – 11pm tonight. Then we’ll train at 10am tomorrow morning, just an hour and a half easy.” The only thing the riders miss out on is a massage.

With only three team staff allowed on the flight with the riders the teams have to drive their busses, trucks and cars on the recommended route through Hamburg, Dortmund, Dusseldorf and across Belgium as organisers ASO have warned everyone to avoid the route through the Netherlands where farmers are currently blockading roads in protest over the Government’s policy of reducing carbon and nitrogen emissions by 2030.

“It’s a strange feeling, it’s almost like you’re going to a new race.” Winston said. “You’ve got new staff in a different country so it feels like another race with a day in between.” But it’s something the teams are getting used to.

This year’s Giro started in Hungary, necessitating a rest day after the opening weekend as the race relocated to Sicily, while the Vuelta will do the same with its start in Utrecht in the Netherlands later in the summer.

“Doing it in three times in one year is a real challenge.” said Rod Ellingworth Deputy Team Principal at Ineos Grenadiers. We’re staying in Dortmund tonight to even out the drive over the two days. The riders are okay, they’re used to the travel and we put them at the centre to make sure of it. They’ve got plenty of support once they’re at the hotel tonight. They’re treating it as a rest day and we’ve got various training rides going out.”

How the riders react and respond to these early rest days is apparently central to the success of the UK’s 2026 Grand Depart bid, with Christian Prudhomme using this weekend as a gauge of that. “It does add challenges, but they attract big crowds and they’re nice starts, so I think they’re worth it.” Winston said. “Especially if there’s a stage round Manchester.”