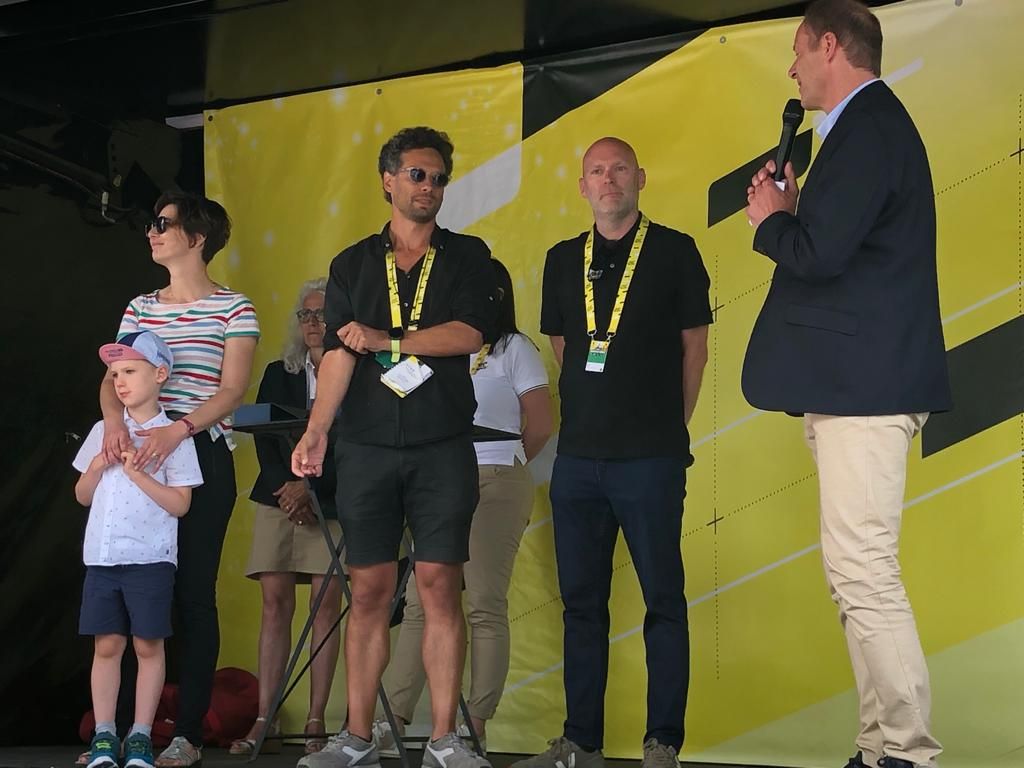 Tour de France organisers ASO invited friends, colleagues and acquaintances of Richard Moore to gather at the stage 5 start in Lille and pay tribute to the late author, journalist, and broadcaster.

Moore, a renowned journalist and co-creator of The Cycling Podcast, died suddenly at his home in Northern France on March 28 this year, aged just 48.

On Wednesday lunchtime, ahead of the cobbled stage of the Tour, Tour de France director Christian Prudhomme took to the stage in the start area to “share a few moments and remember Richard”.

Moore’s colleagues from The Cycling Podcast, Daniel Friebe and Lionel Birnie, were present on stage for the tribute, along with his wife Virginie and son Maxime.

Prudhomme personally paid tribute to Moore as a journalist and podcaster, and a friend of the Tour de France. He awarded Friebe and Birnie the Trophy of Loyalty – given to those who have covered the Tour de France 20 times. Trophies were also given to Virginie and Maxime on Moore’s behalf, as this year would have marked his 19th Tour de France.

Friebe spoke emotionally about his colleague and friend. “I want to thank Christian on behalf of all of Richard’s family – family in the literal sense of the word but also the broader sense – he had many friends here,” he said.

“But still, in a way, he will always be with us and always with the Tour.”

Moore was an international cyclist, who went on to become a widely respected writer and journalist. He covered cycling for a number of major publications including The Guardian, The Sunday Times and Rouleur.

He had a number of books on cycling and athletics published, including Slaying the Badger: LeMond, Hinault and the Greatest Ever Tour de France, which was later adapted into a motion picture.

Moore began the Cycling Podcast with Friebe and Birnie in 2013. The podcast grew rapidly in popularity and has reached over 48 million listeners worldwide.