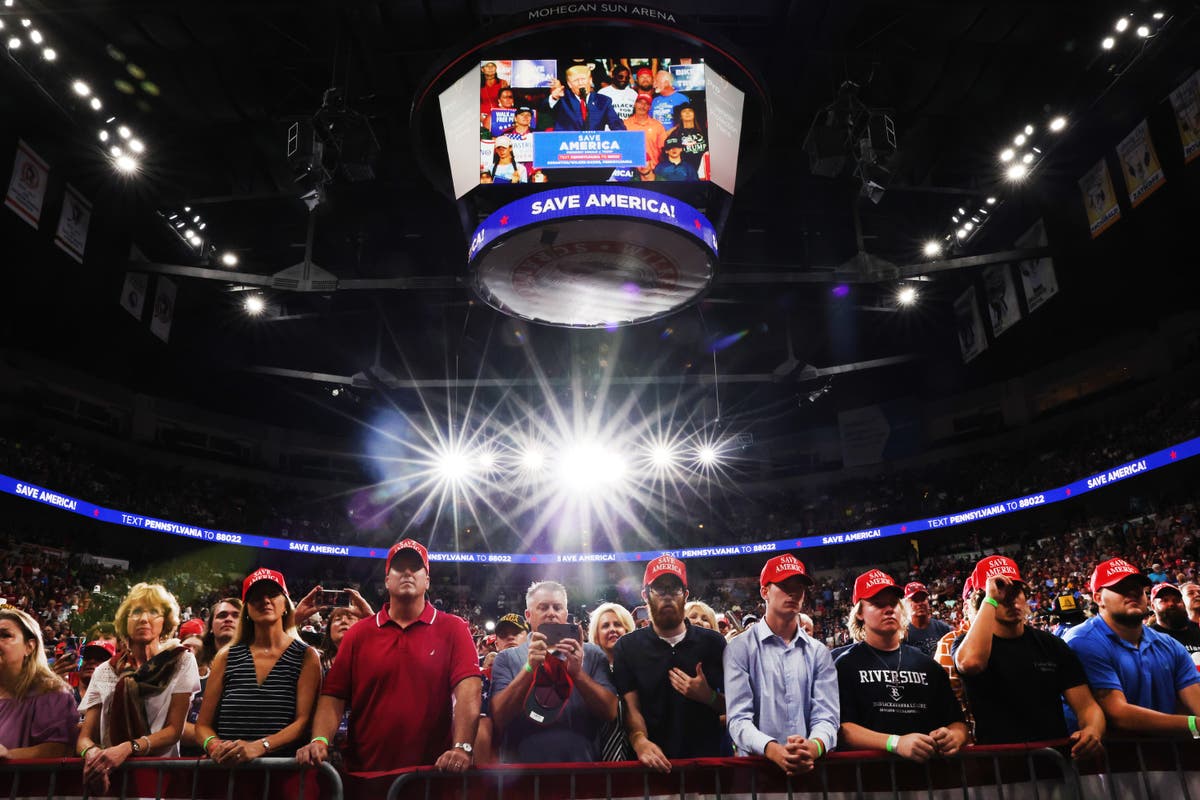 Former president Donald Trump was ostensibly in Wilkes-Barre, Pennsylvania to stump for Republican candidates on the state ballot this November.

But stumping for other Republicans took a notable backseat as the former president defiantly defended himself in his first campaign rally since the FBI executed a search warrant at his Mar-a-Lago home, and his most faithful supporters were on hand to show their solidarity with the man they consider the legitimate winner of the 2020 election.

“The Biden administration invaded the home of their chief political opponent, who is absolutely destroying him and everyone else in the polls,” Mr Trump said to a rapturous crowd at the Mohegan Sun Arena, which was met with echoing boos. “They’re trying to silence me and, more importantly, they are trying to silence you.”

Many of Mr Trump’s sharpest barbs against the FBI or “the deep state” frequently drove supporters to their feet, with many wearing “Make America Great Again” hats or saying “Trump won” in reference to the big lie that Democrats stole the 2020 presidential election.

Wilkes-Barre is based in Luzerne County, one of the white working-class districts that historically voted for Democrats but which Mr Trump flipped in 2016 and in 2020, albeit President Joe Biden shaved off some of his margin of victory in the latter election.

Mr Trump’s speech was ostensibly meant to be to rally supporters for candidates he endorsed, such as senate nominee Dr Mehmet Oz and gubernatorial nominee Doug Mastriano. Both races serve as major litmus tests, given that Mr Trump endorsed both candidates in their primaries but both of them have consistently trailed their Democratic opponents throughout the general election, which has sent the GOP into panic mode.

But although they spoke later in the rally, it was clear supporters were there for the Trump show. Even as people filed into the arena, supporters chanted “Let’s Go Brandon,” the term used among Trump supporters that is code for “F**k Joe Biden,” while others wore shirts saying “You raided the wrong president.”

“There was no reason to go into that man’s house, into his wife’s bedroom,” Ms SantaBarbara said.

Trump’s words came days after the justice department released a court filing that said it had evidence that government records were probably moved to obstruct its investigation.

The filing said that the FBI turned up twice as many documents as Mr Trump’s lawyers had turned over and that some documents were so sensitive that the justice department personnel tasked with reviewing them had to wait for special security clearances.

“They talked about documents not being properly stored,” Mr Trump said. “Yet they go in and take documents, dump them on the floor, stage a photo shoot and pretend that I had done it, as if I had put them all over the floor.”

This, of course ignored the actual heart of the Justice Department’s accusations that he or his team reportedly moved the documents. Similarly, Mr Trump did not show any signs of changing his footing. Christina Bobb and Alina Habba, both attorneys who are assisting him in his efforts against the government, were on hand, despite their frequently legally shoddy appearances on Fox News or other right-wing media.

But Mr Trump defended his actions to the crowd.

“Our movement is fighting against a corrupt group of unelected tyrants who believe they can wield absolute power over you with the help of a willing and very corrupt media,” he said. “They think the deep state, not the citizens, should be the true masters of this country.”

Michelle McNulty came to the rally from Dickson City, Pennsylvania, and echoed the sentiment.

“I feel it was odd because they do not want Trump to win,” Michelle told The Independent ahead of the rally. “That’s why they went there when he was on vacation.”

Mr Trump allowed Dr Oz and Mr Mastriano to speak. He criticised Dr Oz’s Democratic opponent, John Fetterman, whom he said dresses “like a teenager getting high in his parents’ basement”.

“Fetterman supports taxpayer-funded drug dens and the complete decriminalisation of illegal drugs, including heroin, cocaine, crystal meth and ultra lethal fentanyl,” he said. “And by the way, he takes them himself.”

At the same time, Mr Mastriano, a longtime supporter of the president, who was present in Washington on 6 January – though he has said he left the Capitol before the violence began – elicited much stronger applause. Conversely, someone in the audience shouted that Dr Oz was a “RINO” – a Republican in name only – which Marleen Laska echoed after the rally.

“I do not trust that he’s going to do the right thing for America, for America first,” she told The Independent. Nevertheless, she said she planned on voting for him. “I have to vote for him because, you know, we need to get at least a RINO as opposed to Fetterman.”

The crowd frequently chanted “lock her up” or interrupted Mr Trump in the middle of his speech to blast Mr Trump’s enemies. The audience often reached a fever pitch and he garnered numerous standing ovations throughout the rally.

“There’s only one party that’s waging war in American democracy by censoring free speech, criminalising dissent,” he said. “Disarming law-abiding citizens, issuing lawless mandates and unconstitutional orders, imprisoning political protesters. That’s what they’re doing: rigging elections, weaponising the justice department and the FBI like never ever before and raiding and breaking into the homes of their political opponents. I wonder who that could be.”

At the same time, he also noted how he was beating Mr Biden in polling.

“So I may just have to do it again,” he told the audience.

There is likely little that anyone could say to convince Mr Trump’s most dedicated supporters. Richard Morholt, who attended the rally, repeated Mr Trump’s frequent lies about his declassification of documents.

“He has the authority to classified and unclassified anything he wishes in his administration,” Mr Morholt told The Independent after the rally. He also noted how Mr Biden was a “D student”–it is true that Mr Biden received an F in a course after he admitted plagiarism but retook the course–while Trump was an A student, of which, again, there is no evidence since he was never a top student at the University of Pennsylvania. But that truth, just like the truth about the law, will likely prove immaterial.

Andrew Feinberg contributed to this report