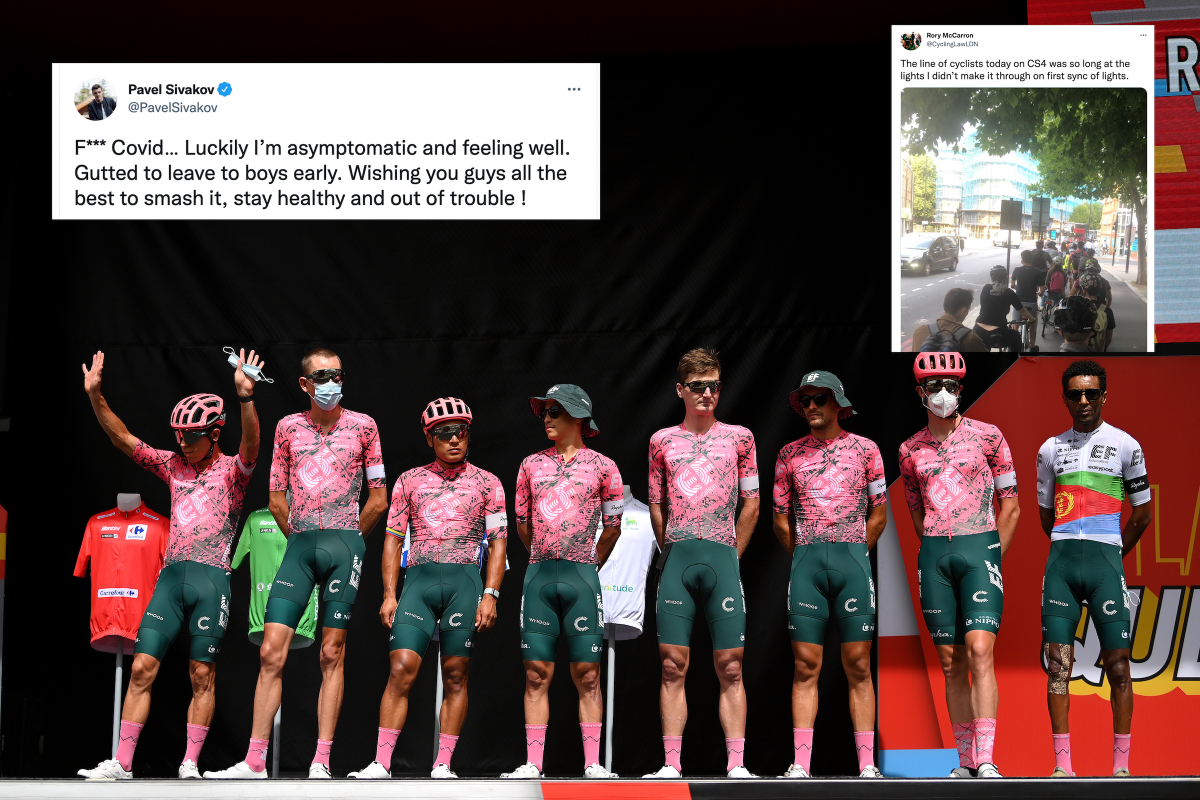 This year’s Vuelta a España has not exactly lit the world alight, with Remco Evenepoel seemingly in control of the race with over a week still to go, little in the way of challenge on the general classification, and Covid dominating the news more than anything else.

This is a shame for fans of cycling, who crave exciting racing beyond everything else, but it might also just be a reflection of my own late summer malaise. No matter, though! There are still multiple social media posts to make you go “huh” or even “heh”.

In this week’s bundle of tasty treats for you all we have riders and teams reacting to Covid bad news, Louis Meintjes in a river, and Spiderman on a bike. I mean, what more could you want?

We will continue to hope for thrilling action at the Vuelta in the coming days, or perhaps even a brilliant Tour of Britain. In the meantime, here are some posts.

1. Quick-Step Alpha Vinyl are closing in on securing their first ever Grand Tour win, but haven’t let that get in the way of some Spanish sightseeing. Ronda does indeed look nice. Nicer than the Ronde van Vlaanderen, anyway

2. EF Education-EasyPost came into this Vuelta with the goal of having as many riders as possible finish high up on GC in order to gain UCI points. 20th, 19th and 18th possibly was not the plan. Who knows! Maybe it was

3. What would you do on a rest day at a Grand Tour? Go for a quick spin, rest up, maybe swim if you’re in Alicante? If you’re Alexey Lutsenko, you fly to Monaco to witness the birth of your child. Impeccable timing

4. This is more like it for a rest day. Louis Meintjes looks at one with nature as he bathes in full Intermarché kit. Interestingly enough, that’s also what I go swimming in

5. Miguel Ángel López might be nicknamed “superman” but he needs to watch out, Spiderman is also at the Vuelta

Spotted at the start of #LaVuelta22 today… your favourite neighbourhood #SpiderMan out for a ride 🕷🚴‍♂️ pic.twitter.com/17LSkxC3ECAugust 27, 2022

6. In September 2022, I think we can all echo Pavel Sivakov’s sentiments

F*** Covid… Luckily I’m asymptomatic and feeling well. Gutted to leave to boys early. Wishing you guys all the best to smash it, stay healthy and out of trouble ! https://t.co/sDDM63uMOJAugust 31, 2022

7. Who knows if anyone at BikeExchange-Jayco are big Queen fans, but after Simon Yates left the Vuelta thanks to Covid, they were all singing the final track from 1991’s Innuendo

8. Not content with holding the red jersey at the Vuelta, being Belgium’s first hope of a Grand Tour in a generation, Remco love to direct traffic

9. We learned that Ryan Mullen is not an excellent cook

10. Imagine this: You puncture on a ride. You don’t have a pump. You stand at the side of the road for what seems like hours, and then out of nowhere, 34-Tour de France stage winner Mark Cavendish appears. “No probs, mate”, he says, and produces a mini pump. You’re back on your way in minutes

Very very disappointed to be left out the selection for @wollongong2022. Best of luck to the ones who were selected. https://t.co/9RRQQNwpmqAugust 30, 2022

12. Build bike infrastructure and they will come! Heartening stuff

The line of cyclists today on CS4 was so long at the lights I didn’t make it through on first sync of lights. pic.twitter.com/YyNBoBLg7RSeptember 1, 2022