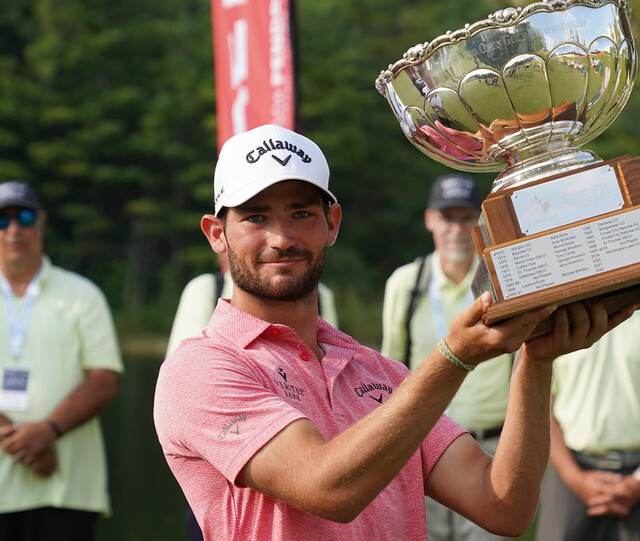 Noah Goodwin after winning the Ontario Open earlier this year.

The competitive course record at Gallagher’s Canyon Golf and Country Club came under attack Friday during the second round of the PGA Tour Canada’s GolfBC Championship.

The course and tournament record of 12-under par 59 was established three years ago by Greyson Sigg during the final round of that year’s GolfBC Championship.

The sub-60 number came under siege not once, but twice on Friday when Americans Noah Goodwin and Dalton Ward fired identical 10-under 61s.

Ward, whose round came on the heels of an up-and-down one-under 70 Thursday, made the turn at -7 after he followed a hole-out eagle on two with four straight birdies on holes three through six.

He closed the back nine with four birdies and his lone bogey of the round, including back-to-back birdies on the final two holes to card his 61.

Despite the round, he finds himself three shots in arrears of Goodwin. The 22-year-old Corinth, TX native fired four birdies on the front side before back-to-back eagles on the par four 11th and dogleg right par five 12th propelled him toward the top of the leaderboard.

“I’m still waiting to wake up right now. It was just one of those rounds of golf where everything was perfect,” Goodwin said after the round.

It was his second 61 in a week, after carding the same score in the final round of the PGA Tour Canada event a week ago.

Madey, one of eight players who gained entry into the tournament through a Monday qualifying round at the Okanagan Golf Club, fired a six-under 65, while Harvol backed up his opening round 66 with a sizzling eight-under 63.

Four golfers find themselves three back at 11-under 131 including Ward and first round co-leader Luke Schniederjans.

Rycroft, AB native Max Sekulic, who also qualified to get into the event Monday, and Jimmy Jones share top Canadian honours after identical second round 66s left them at 10-under 132, four shots back.

Reigning money leader and Fortinet Cup points leader Wil Bateman and another Canadian, Etienne Papineau are a further shot back at nine-under 133.

The field was cut to the low 60 and ties following Friday’s round. Golfers had to be four-under or better to make it to the weekend.

The final round is set for Sunday at Gallagher’s Canyon.